When a Sodexo employee meets the woman of his dreams

It was a cold morning up on South Hill. The sky was gray and snow began to flurry down from the sky when junior Ithaca student Arnold Stein hit the snooze button for the third time before finally getting out of bed. Arnold quickly brushed his hands through his bedhead and put on his Persian blue polo and Sodexo-embroidered apron before making the trek up to Towers Dining Hall.

Through Sodexo, Arnold found it easy to connect with nearly everyone, that is, with everyone except the ladies. Arnold hadn’t had a girlfriend since Mindy Harold broke his heart in the tenth grade. It was a tragic time when she dumped him, and then her lunch tray on top of him in the school cafeteria, staining both his new Dungeons and Dragons shirt and his reputation.

Arnold’s parents, grandparents, cousins, and friends always ask him why he hasn’t found anyone yet, but being the Astronomy major he is, he always replies: “I’m waiting for the stars to align.”

It was just past noon, and Arnold was almost done with his shift at the dish return. Arnold has always been a bit of a loner, and his job at Towers didn’t really do anything to help his lonely situation. 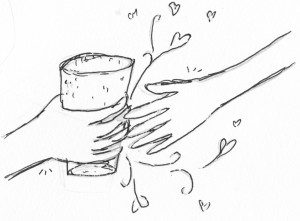 Arnold never got to see many students at the dish return because of the metal wall that separates him from Towers diners.

The clock read 12:29 – one minute left in Arnold’s shift. As Arnold started taking off his gloves, one final dish came through the dish return.

The hands responsible for returning this plate were the most beautiful hands Arnold had ever seen, with nails painted the perfect shade of purple and a silver ring that sparkled in the fluorescent kitchen lighting.

Arnold reached to clear the plate as the mystery girl reached for the breadstick still left on the plate, and in that moment, as if fate led them there, their hands touched.

The chemistry between the two was explosive. Arnold nearly dropped the dish and he swore he saw stars. Out of the corner of his eye, Arnold was sure he saw a breadstick fall to the floor on the other side of the metal wall.

Arnold looked down at the girl’s plate and noticed her silver ring had been left behind. “Wait!” he called out, but to no avail, the girl was gone and new dishes needed to be cleaned, so Arnold placed the ring in his pocket, determined to return it one day soon.

“I think I just met the girl I’m going to marry,” Arnold turned and boasted to his fellow Sodexo employees. “It’s her, I just know it.”

However, Arnold’s happiness was short lived as the other more experienced Sodexo workers expressed their skepticism and familiarity with Arnold’s first “Sodexo Love.”

The chef that works the Mindful station put his arm around Arnold and advised him to let the girl go while he can.

“I remember my first Sodexo love. What a girl! I overheard her telling a hilarious, food-themed knock-knock joke and I was hooked!” Then, the chef took on a more somber tone. “We’ve all been there, and it never ends well. No one ever finds the girl.”

This only fueled Arnold’s passion and determination to find the mystery girl — his Sodexo love. He ran from dining hall to dining hall in search of the girl with the purple nails whose hand fit the ring, but eventually, Arnold ran out of meal swipes and time.

“She could be anywhere on campus now!” Arnold cried.

But the young romantic didn’t stop there. Soon, there were flyers outside of every dining hall with a detailed description and picture of the girl’s hands. After seeing the success of the @IC_Crushes Twitter page, Arnold created an @Sodexo_Crushes page that went viral overnight. Pretty soon, Jake from the Mindful station in Campus Center and Eileen from Terraces found their crushes, but Arnold was still alone.

Are you the girl with the ring and the purple nails and a size 7 ring? These successful love stories keep the morale of the Sodexo workers up and keep the food quality at top notch, because after all, a little love goes a long way. So please, for Sodexo’s sake, tweet Arnold @Sodexo_Crushes if you have any information about this girl. Will Arnold ever find love?

UPDATE: We caught up with Arnold two weeks later and found him happily dating the Sodexo girl of his dreams with the ring and purple nails. The hunt to find Sodex-erella was a long one, and there were dozens of freshman Theatre Studies major girls who all tried to pose as Arnold’s dream girl, but it was no use; the ring simply didn’t fit.

“I saw the flyer and at first thought it had to be coincidence that my nails were painted purple, but then I saw description of the ring, the one I had just lost, and knew it had to be me,” Arnold’s dream girl explained.

Arnold is currently working with the Student Governance Council to write a bill to take away the metal walls at the dish return at every dining hall throughout campus.

Sarah Horbacewicz is a first year television-radio major who refuses to eat anything but dining hall meals. Email them at shorbacewicz@ithaca.edu.

What Belongs In a Girlboss’ Bag

Buzzsaw Asks Why…Nobody Will Take Me Up on...

10 signs you’ve Girlbossed too Close to The...

Grimes is the Marie Antoinette of the 21st...

He’s All That: For Your Consideration