Home IssuesObsessed The Man Who Takes Out the Trash
ObsessedSawdust

The Man Who Takes Out the Trash

Letter of support of Tom Rochon, by Tim Rochon

With the growing tension surrounding my brother, Tom, I feel that I should shed some light on what’s going on at Ithaca College. My name is Tim Rochon, and I want to share a few stories about my brother that I think relate quite strongly to a lot of the complaints raised towards him of late; and I think they stand to prove the good nature of his being.

One of the questions about my brother is a matter of empty dialogue as opposed to taking action on any issues. I disagree with this sentiment more than cows say “moo.” Tommy has been taking action since we were in grade school. For example, this one time, Ma and Pop were telling us to take out the trash, and Tommy, being the learned kid he was, stepped up and really helped us improve the trash situation. He delegated roles to me as well as our little sister, Tammy. 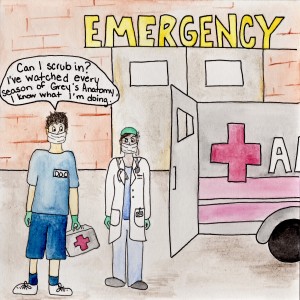 Another thing I’ve heard is that he rarely involves himself with on campus events, but I just can’t believe this is true. He’s always relished his visits to Campus Center Dining Hall where he consciously avoids everybody in the room. He always told me stories about how he would sit in the corner and avoid students like the plague. He always mentioned his fear of having any conversations with them, noting his inability to figure out “what they like.” I usually assumed that by “they,” he mean the students. As a matter of fact, it actually seems to me he may be a tad out of touch. Nah, can’t be true. I once saw him actually smile and nod at a student while slipping quietly through Textor Hall. He’s definitely a friend and mentor to those students.

Finally, I’ve heard some complaints that Tommy has what some have deemed an exorbitant salary, but I just don’t see how anyone can see this as a problem. Tommy works pretty hard if I do say so myself. And besides, he’s always using that money to do nice things like get his kids gifts and buy the food he brings to his lunches at the Campus Center Dining Hall. He never spends any money on Tim, though. No, Tim can do fine all by himself, whatever.

That being said, I would like to express my vote of confidence in my brother: Tom Rochon. I believe he is equipped to make Ithaca College great again.

Jordan Aaron is a sophomore screenwriting major who prefers recycling. You can email him at jaaron@ithaca.edu.