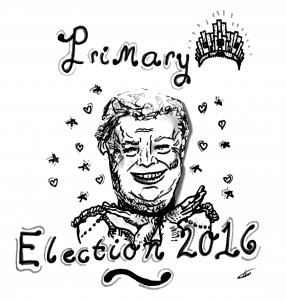 With voter turnouts for the last presidential election at a record low, candidates of the 2016 election wanted to spice things up a little. How will a bunch of old people, out of touch with time, entertain the youth of America? A talent show of course!

The candidates all drove to Ohio Stadium. The event, although unprecedented, brought huge crowds of people from across the state. The first two rows were filled with political donors, with the third row occupied by only the Koch Brothers. The rest of the row was occupied by bags of money.

“I thought it was a little strange too…” spoke one of the brothers’ assistants, “…but hey, if you control who the next president of the United States will be, do whatever you wish.”

When everyone had found their seats, Mitt Romney appeared on stage. He was met with a mixed applauses and people asking each other, “Who is he again?”

Mr. Romney then went on to list of the candidates that would be appearing that night. There was an uproar when it was announced that Trump would not be contending. This prompted Romney to shrug and say, “I just work here.”

Disgruntled, about half of the audience left. When they exited to the parking lot, they were met by Trump, who was standing on top of a helicopter, which was atop a bus. He declared he would be having his own competition. He had bought the nearby University Hospital, and planned to have his competition in the parking lot. He then returned to his chopper, leading the trail of cars that followed.

Romney, obviously shaken by the events, quickly announced that the Democrats would be going first, before departing to his own chopper.

The first person to go was none other than Hillary Clinton, who displayed her ability to recite Machiavelli quotes as the House of Cards theme song played behind her. As her act was drawing to a close, Bill suddenly burst on stage. The crowd rose to their feet in applause. Hillary then grabbed Bill by the ear, bringing him off stage. An assistant told the press that they had a train to catch.

Bernie Sanders was supposed to go next, but like Trump he couldn’t be there. When asked why he couldn’t attend he commented that he was “Too old for this [expletive].”

The Republicans now had the stage. Marco Rubio started singing the national anthem. He received mixed responses. Lindsey Graham went next, displaying all of the ways he could destroy a cell phone.

“Before the show started, I asked a group of people if I could borrow their cell phones…” Rubio said. “I told them it would help me become president. People will give you anything if they hear you’re running for president.” Bobby Jindal was supposed to go before Graham, but was locked out of his dressing room. When no one looked to help him, he got in a car with Scott Walker and drove to see Trump.

They were stuck in traffic though, when Chris Christie showed his talent for shutting down bridges.
Jeb Bush was surprised when he was told he would be going after Christie.

“Apparently, all the other contestants went to see Trump” He said. “However, I was in the middle of shaving and watching Chris Farley highlights on SNL.”

In an attempt to stall long enough for his brother to come on stage, George Bush parachuted down into the open stadium. He then started telling jokes, showing of his golfing skills, and yelling random quotes from his presidency. When Jeb saw what was happening on the TV he rushed out to stop him. George was tackled by his brother, but not before yelling “I know the human being and fish can co-exist peacefully!”

By this point, the rest of the audience had gone to see Trump. Only one person remained in the stadium: President Barack Obama. Fiddling with confetti, he looked up to the sky. Even from miles away, he could hear the Trump show. Sighing, he broke out into “For the Longest Time” by Billy Joel, snapping his way out of the empty stadium.

Caameron Bain is a freshman journalism major who still thinks Yeezy is overrated. You can email him at ckoenig@ithaca.edu.