A Hero For Our City?

Surely, by this point everyone knows about Dr. Destruction, the masked maniac who has been terrorizing our city for the past four months, despite the best efforts of law enforcement. The few bold citizens who dared to oppose him (including our late, beloved city clerk Amir Wellesley) have vanished under suspicious circumstances and resistance has all but vanished. In fact, the only reason I am daring to write this article is because of a startling beacon of hope for our bruised city: a mysterious new hero, whose superpowers seem like a formidable threat to Dr. Destruction. 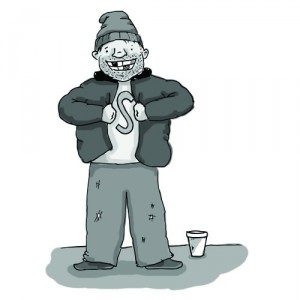 But who is our city’s new saviors? The answer may come from a homeless man named Roger, who claims that the city’s hero is none other than Jimmy, another homeless man who lives near the bowling alley. Our reporters reached out to Jimmy, who, according to senior correspondent Sarah Hassan, “… clearly isn’t our hero. I mean, a homeless superhero? That’s ridiculous. Maybe if he had a real house, or a job, or anything really. But a hobo? Definitely not.”

According to Hassan, Jimmy proceeded to fly into the air and melt a hole in the side of an abandoned building with bolts of energy from his eyes (flagrantly violating vandalism laws and frightening several birds,) while declaring that he was, in fact, the city’s new savior.

“I couldn’t believe it!” Hassan said. “To see a man with such outright disrespect for social order makes me sick. He belongs on the streets.” Hassan then left, stating that Jimmy “probably just wanted spare change,” and that “it’s better to leave these kinds of people alone.”

“I can’t see how anyone would think this man is our hero,” Hassan said. “He’s probably just on drugs or something. There are drugs that do that, right? I don’t know. I try to distance myself from these people. Does this guy appear to have the same abilities as the superhero? Maybe. The same general build, facial features and speaking voice? Sure. But just look at the noble, selfless way that our hero defends the city. These are clearly the actions of a steadily employed, contributing member of society. Not some bum who lives in an alley.”

So, the hunt continues for our city’s mysterious new savior. More on this story as it unfolds.

UPDATE: Shortly after Hassan’s departure from the scene, numerous eyewitnesses confirm that Dr. Destruction appeared and began to lay waste to much of the block, only to be stopped by Jimmy, who was still hovering in the air following his conversation with Hassan. Jimmy allegedly used beams of energy to stun Dr. Destruction, who fled the scene. Correspondent Hassan has declined to comment on these events.

Nicholas Paraggio is a freshman music education major by day, masked vigilante by night. You can email him at nparaggio@ithaca.edu.