Home Issues Give Me Chicken, Give Me Sinners
IssuesMagazinePietySawdust

Give Me Chicken, Give Me Sinners 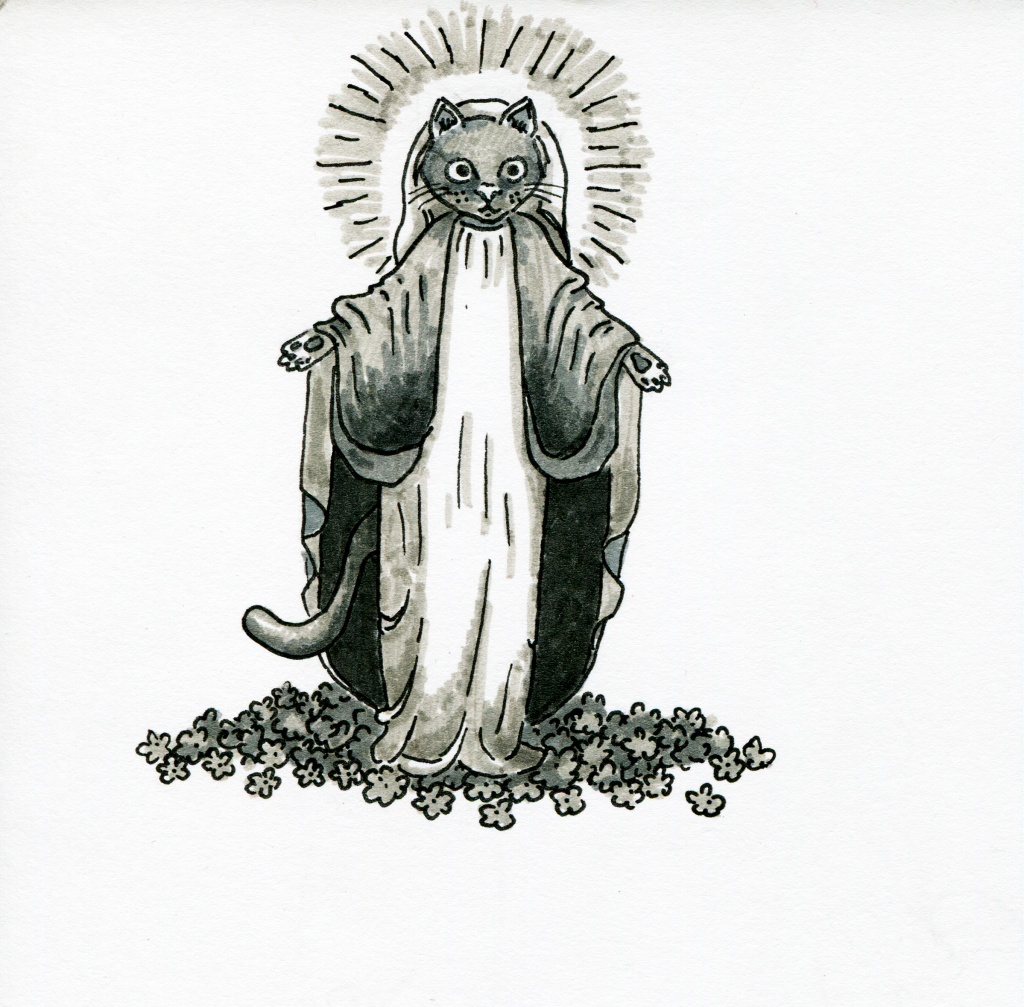 Enthusiasts of fun and exhilarating new religions such as Jediism will be in for a treat after attending Ithaca College. Students have put all of their faith into an adorable, plump cat, dubbed the Ithacat, who sits in the bushes below the library. While religions are certainly known for conflict and struggle, they are nowhere close to what Ithacatholicism has brought to South Hill.

The student behind it all is none other than sophomore Jeffrey Michael, a film student who first noticed the cat on his way to the library for some late studies of tripods. He walked by the bushes and out of nowhere a “meow” rocked his world. He spent the last couple months filming the cat to try and create a documentary creatively titled Cat.
During his studies of the Ithacat, he decided to see where the cat went to sleep; for surely in this weather, not even the Ithacat could survive outside. What he saw changed his life forever. For the sake of privacy for the cat, Michael was mum to the actual location of the Ithacat’s home. The only description about its true home was “where Elvis and Amelia Earhart live.”

Only one other person knows the undisclosed location. Michael’s girlfriend Natalie Ratti urged him to show her the whereabouts of the cat. When questioned about the location, her only response was, “I can’t say where it is, but I looked into the heart of Ithaca College, and what I saw was beautiful.”

Due to the mystery of the mouser, many students quickly banded together to create a religion for their sacred feline. Since then, students have wrapped themselves to the religion like catnip. Students often gather at the bushes under the library waiting for their leader to emerge. Many give offerings such as tuna cans, and ask for good grades, more Panda Paws ice cream at the dining halls, and “that girl from 4E to say hello to them on their way to class.” Students even started a holiday for the cat on Nov. 31. On it, students dress up as cats and wear minimal clothing to represent the cold the Ithacat must suffer through while waiting in the bushes to hear students’ requests.

Not everyone is praising this new cat on the block. Ithaca’s leader Tom Rochon sent a band of explorers nicknamed the Mousekateers to conduct a nonstop search for the home of the cat. These explorers are actually students pursuing the Exploratory Major at Ithaca College looking for ways to intern while still attending classes on campus. Many Ithacatholics have claimed that they are going to get rid of the cat when found, but the Mousekateers claim that this group is simply are trying to earn some money to be able to afford books at the bookstore. Ithaca College clubs Seeing-Eye Dogs for Life and Dogs > Cats stand by the Mousekateers. Leader of Pet-a-Puppy, Mildred Wagnor said, “We must remove the Ithacat, because, like rabies and stuff.” Kidnappings of the cat have already been attempted many times, forcing the cat to retreat further into the bushes. Lack of space has pressured the Mousekateers to start packing. Recently, however news has spread that the TC Lounge, home of the Tiger Brownie, was to be shut down to require space for “new offices.” Word from Ithacatholics is that the space is really to be used for storage of the equipment used by the Mousekateers, who never actually stopped searching.

Since then, small protests have occurred within the confines of the college. Petitions are being propelled across the Internet faster than the T-Cat on a Saturday night. Other neighboring cities such as Cortland have protested and rioted after news of the kidnappings of the Ithacat was spread to Ithaca College’s rival school during Cortaca.

More conflicts are likely to ensue while this War of the Ithacat proceeds. Perhaps one will never know the true location of the Ithacat, remaining as mysterious as the contents of the Pulp Fiction briefcase. Or perhaps there is no “Heart of Ithaca College” at all, and perhaps this is all a giant ploy by Michael to create a new documentary Katnap. Whatever the consequence, we can only pray that the Ithacat has mercy on us all.