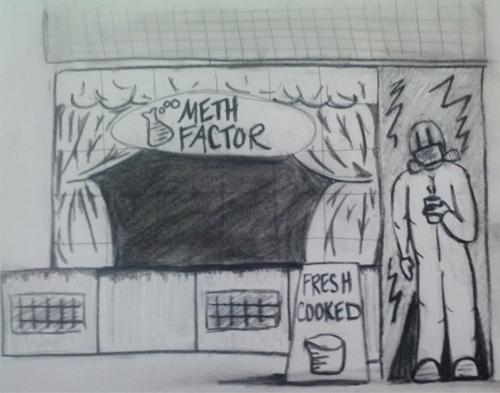 Since approximately 11a.m. on this traumatic Sunday morning, Ithaca Police have been investigating the aftermath of a brunch date gone seriously wrong. After dining at the Ithaca Commons’ locally famous and cult-owned restaurant, Mate Factor Cafe, freshman Krista Mettenberg is still in critical condition, suffering from what appears to be a nasty reaction from ingesting Methamphetamine, or Crystal Meth.
Shortly after devouring one of Mate Factor’s hearty waffles, friends of Mettenberg reported that she began experiencing involuntary facial twitching. Within minutes, Mettenberg’s overall behavior completely transformed. An anonymous on-looker described Mettenberg’s drug-induced episode as “Donkey Kong-like” as she began pouncing from table to table, proclaiming herself as dictator of the cafe. “Pride Rock is mine!” she shouted, just before going into shock, succumbing to the effects of an on-target officer’s taser gun.
After ongoing investigation, Ithaca Police discovered a plethora of incriminating evidence, opening the public’s eye to Mate Factor Cafe’s real business. Officials described a strong odor of urine wafting from all corners of the kitchen, as well as a musty scent of fish sticks lingering behind the counter.
Despite her frantic and baffled state, Mettenberg’s brunch date, IC student Mary Jane Reeves, vouched as a witness to her episode. “I am almost certain that Krista was not planning on voluntarily going anywhere near meth until at least junior year, and that she had no idea this would happen when we decided to dine here this morning.”
Long time Mate Factor patron, Blaze Weedenberg had absolutely no idea that their food services were merely a side business.
“I had always attributed my after-breakfast rush to all of the natural and organic foods I was ingesting. This totally explains my five hour sprints through the Recreational Trails and the overbearing dominance that ruined my last relationship!”
Others, however, had a different reaction to the revelation of Mate Factor’s secrets. 84-year old Lucy Diamond had been buying her crystal meth from Mate Factor Cafe for years, and had assumed it was openly retailing. “Do you know who I can buy from now?” This was all Diamond could say before she was taken into custody for attempting to purchase illegal substances.
As owners and employees have also been in mandatory treatment for each of their meth addictions, free clinics will be made available to any long-time, regular customers who have not adjusted to the recent closing of Mate Factor Cafe. Dates, times and locations of these clinics will soon be determined.
____________________________________
Lizzy Rosenberg is a sophomore IMC major who drank the organic Kool-Aid. Email her at erosenb3@ithaca.edu.