Home Issues Home’s Own, Not So Home Grown
IssuesLocalMagazineSawdust

Home’s Own, Not So Home Grown 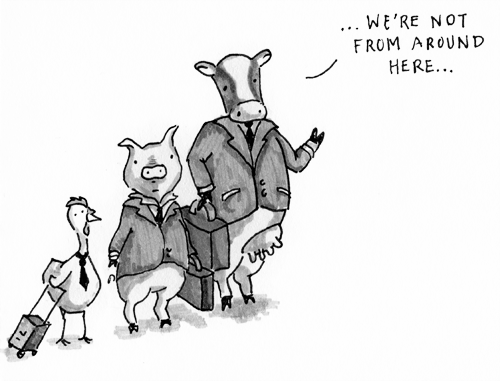 In a town not far from Ithaca in either mileage or values, outrage has broken out over the claim that a local establishment refuses to use local meat. Stillwater, New York’s restaurant, Home’s Own seems to sit on a throne of its own lies. A recent undercover report revealed the shocking truth about this “local” establishment. Earlier this week, the truth came pouring out. Home’s Own uses homegrown vegetables but imports its meat from 15 miles west of Stillwater, making the local label a lie.

The community is outraged by this information. Questions began to arise when patrons could see the garden behind the restaurant, but no space for livestock. The menu offers dishes that include beef, pork, chicken, and eggs but no such animals can be found anywhere on the premises or in town. Not to mention the milk, used in many dishes for dairy-based sauces and often complimenting their scrumptious
desserts, seems to have come from these foreign raised cows.

“I used to go to Home’s Own every week and order their Grass-Fed Garden Burger until one day I realized they had no garden. Where did that burger patty come from?!”

Mr. Markles isn’t the only one confused and saddened by this information.

Marissa Blowens took her children there weekly to celebrate their good grades but now says she won’t be back.

“Who wants chicken tenders that come from some chicken I’ve never even seen?” said Blowens. “That’s not how I want to raise my children!”
When restaurant owner and head chef Louis Garley was questioned about the lies the establishment promoted, he had only excuses.

“Seriously?” he whined. “It’s 15 miles. That’s still local. We have no farms here, no space for raising livestock. It would be unsanitary and unhealthy.”

Seeing his point, a local advocates group brought a resolution to the table. Local Lovers United leader Stacy Harmon said, “There are plenty of squirrels and birds right in my backyard. Why not use those? Why not our meat?”

Mr. Garley heard the claim and responded only with a stern “no,” as he rolled his eyes.

As the community continues to battle with Home’s Own over pigeons as poultry, some still patronize the establishment.

“I guess next time I go I can just order a salad,” said Markles, when asked if he would be returning to the restaurant any time soon.

Local Lovers United will be taking their stand in a formal protest outside the restaurant through a number of demonstrations this upcoming week. They are willing to let patrons enter, as long as they promise to only eat the local items and possibly bring the protesters some of their famous fruit compote.
____________________________________
Brianna Pennella is a senior TV-R major who only eats squirrel if it’s hunted with a bow and arrow Katniss style. Email her at bpennel1@ithaca.edu.