One student’s journey to understand the hardships of teenage pregnancy 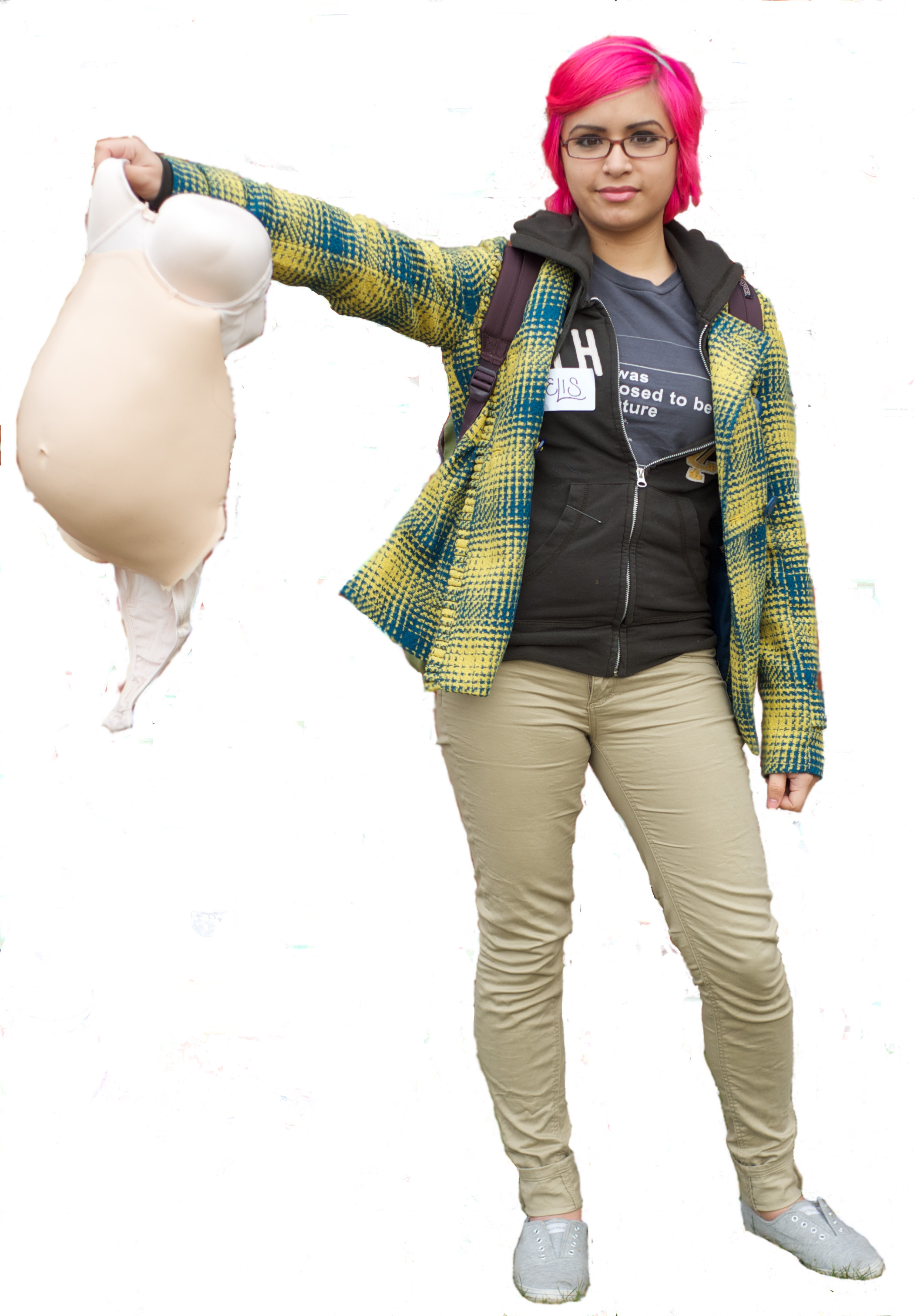 On Feb. 7, nearly 40 students attended “Conception: The Introspective Journey of a Teenage Mother,” a presentation by sophomore Cöelis Mendoza, 19, about her unexpected pregnancy during college. Students watched as Mendoza, with her round, pregnant belly, turned on the projector and nervously began talking about her experiences. Then, after about 15 minutes, she stopped talking and let out a big sigh. Mendoza then began to remove the straps underneath her dress and pulled out a fake pregnancy belly, revealing the secret she had been hiding since August.

“There’s a difference in actually being perceived as a teenage mother — [in saying,] ‘This is what happened to me,’ rather than ‘This is what happened to other people,’” Mendoza said.
Every day, starting in August, Mendoza put on her body shaper and stuffed it with foam, taking it off only at her Ithaca apartment and during winter break at home. Near the end of her “pregnancy,” she bought a $500 pregnancy suit from an online website that sold them for theatre productions. She said it made her “pregnancy” look more authentic, especially with its realistic belly-like feel that friends could touch.

Only five close friends knew about the experiment originally, but about a dozen people, including two professors, ended up knowing about Mendoza’s project before the end of her research. Mendoza performed a whole new role as a pregnant teenager. She did not go out with her friends often or consume alcohol. She had to be cautious getting in and out of desks. She even carefully walked a few feet behind people so no one would accidentally hit her belly. When asked about the baby’s sex or baby names, she said that she was giving the baby up for adoption — which many people responded with a “that’s good.”

Both professors and her friends encouraged her to take the Spring semester off as a medical leave of absence. Mendoza said that there were not many resources for pregnant women on campus. “Ithaca College does not provide institutional support for pregnant students,” she said.

Mendoza said she began to get extremely frustrated with her experiment near the end, but her boyfriend, who was very supportive of the project, pushed her to follow through. Though Mendoza said she is relieved the project is now over, she is glad she remained “pregnant” the entire “term.” 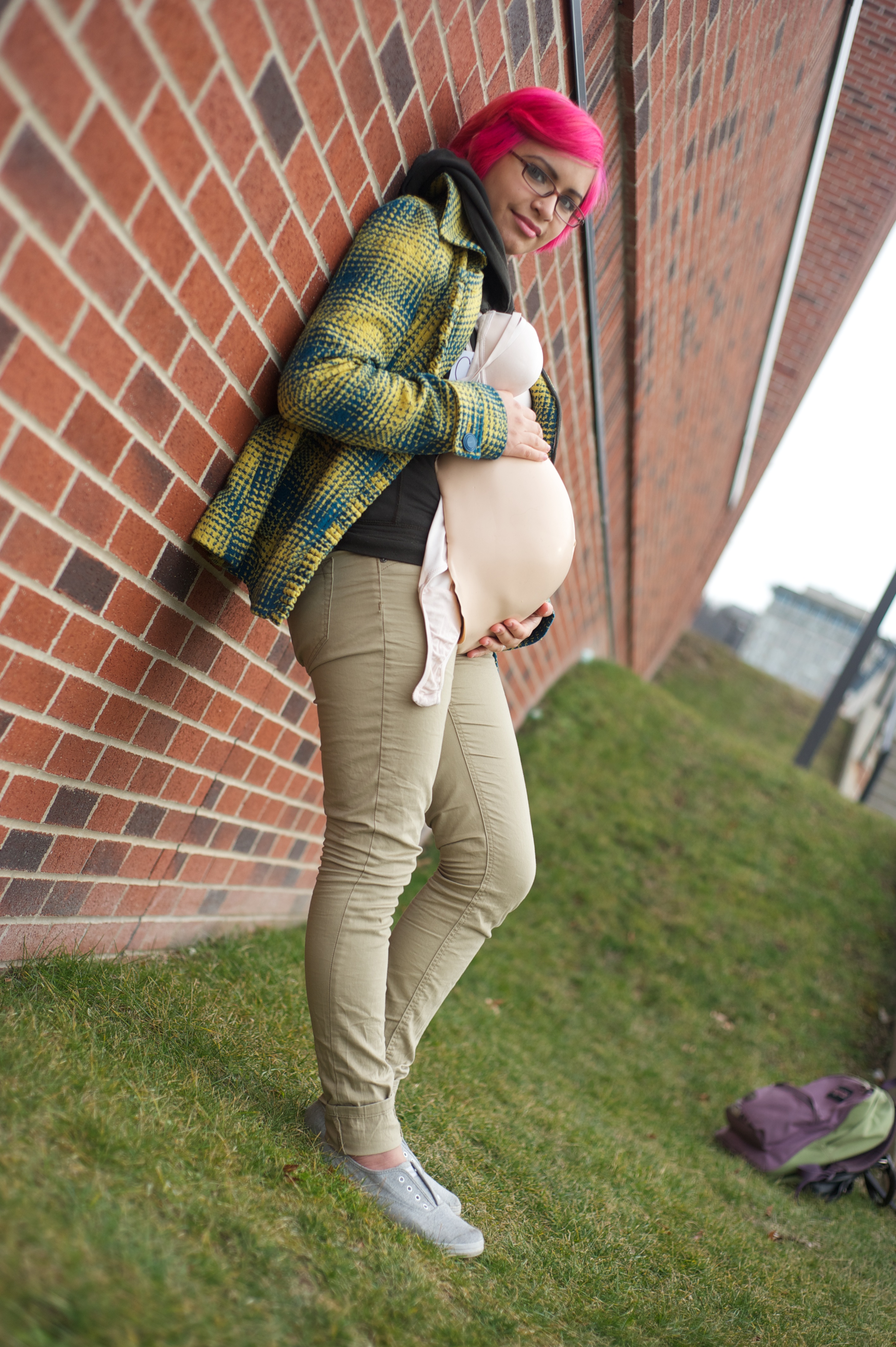 “Pregnancy was perceived as a disappointment,” she said. “Generally, there was a feeling of pity.”
Throughout the experiment, Mendoza noticed that her peers looked at her oddly, but no one would address her directly. They would instead address her close friends, who then relayed to Mendoza the general sense of people’s responses.

Mendoza hopes people think twice before they place judgment on young mothers. “If one does become pregnant at a young age, the hardships already involved in motherhood do not have to be exacerbated by social stigmas,” she said. “I want people to understand that the way they look down upon teenage mothers is just as responsible for the teenage mother’s plight.”

Mendoza hopes to use her personal experience, along with an online survey she conducted, to create a social justice research project for her MLK Scholar program as well as a project for next year’s National Conference on Undergraduate Research. She ultimately hopes people learn and begin to understand how stereotyping has a harmful effect on expectant mothers.

“I learned that, regardless the age of a mother, a mother is a mother and should be treated with due respect,” she said. “Regardless of the decisions that she has or hasn’t thought of, there are so many things that are going on that it’s hurtful to place her in a very small category simply because of her age.”

Kaley Belval is a freshman documentary studies major who wrote a very different article than she was expecting. Email her at kbelval1@ithaca.edu.