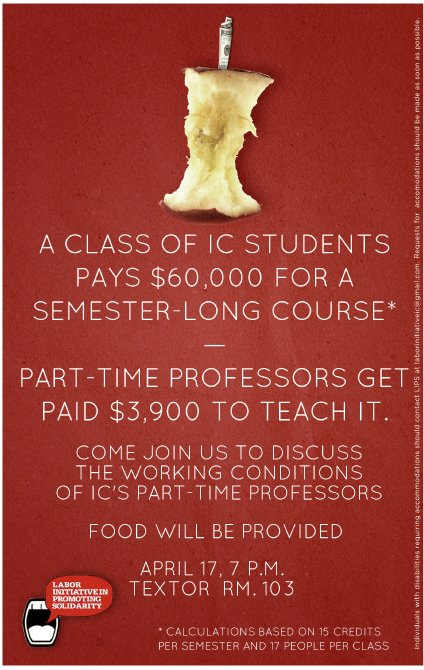 As Ithaca College’s tuition is set to increase 4.7 percent, part-time professors at the institution will not, for the second year in a row, receive a raise. Hence, while students will soon be paying more than $50,000 for attendance, several of their professors will continue to struggle financially to get by. In fact, an average class of students pays nearly $60,000 for a semester-long course, while their part-time professor gets paid only $3,900 to teach it — $1,300 per credit hour.

Believing this unfair, members of the Labor Initiative in Promoting Solidarity began reaching out to and conducting interviews with part-time professors. These professors spoke about their struggles making ends meet, preparing for the future and gaining respect.

Around 30 percent of Ithaca College’s more than 700 faculty members are part-time. Part-time professors do not receive health benefits, have no sense of job security since contracts are renewed at the administration’s will, rarely receive funds to conduct research or attend conferences and may feel disregarded as a “fill-in.” On top of this, many part-time professors have to work other jobs for financial security, as they don’t make nearly as much per credit hour as full-time professors.

“It always bothers you that you’re not getting compensated fairly,” one IC professor said. “If you put in the same amount of work, you should get an equal amount of pay.”

When professors Zillah Eisenstein and Michael Smith learned that full-time professors would be receiving a raise next year, of 2.5 percent, but part-time professors would not, they decided to write a letter to the Board of Trustees and administrators. The letter is addressed to the Board, President Rochon, Provost Kelly and the deans of the various schools on campus and is signed by nearly 70 full-time faculty members. It demands a pay increase for part-time faculty before contracts are signed later this semester.

“We wanted to make it public — for us to say nothing is to normalize it, and we want to say that this is unacceptable and everyone should be getting a pay wage,” Eisenstein said. “Things are getting worse and less is being said about it.”

Smith, who was once a part-time professor years ago, said it was important for him to speak up.

“I really see it as part of my responsibility in having tenure to advocate for colleagues who often don’t have a voice” Smith said. “There’s this really profound caste system in higher education. It’s not acknowledged sufficiently by those of us on the good side of things, but adjuncts are very conscious of how unequal things are.”

The number of part-time professor hires is increasing nationwide. According to the U.S. Department of Education, tenure and tenure-track faculty hires across the nation have decreased dramatically, while part-time faculty positions have increased, from 24 percent in 1975 to 41 percent in 2009, largely due to the appeal of the financial flexibility it offers.

“This is global,” Eisenstein said. “The academy is being restructured in terms of labor,   in terms of global capital, and particularly, this is happening to professional workers. It’s all about merit competition — their system of control of workers — and some people being able to get very rich while others can’t.”

Just like students will soon be doing, many part-time professors are entering the dismal labor market hoping to obtain any job they can get.

“I do not think the academy should be working off of the backs of people who are just unlucky enough to be coming into the labor pool at this moment,” Eisenstein said. “They’re coming in at the very moment that the best a lot of them are going to get is a non-tenured part-time job. It’s outsourcing. It’s cheaper to just bring in somebody, not give them an office and pay them poorly.”

Ithaca College needs to recognize the great part-time faculty on-campus and the important role they play in meeting the demand for professors. Students and faculty alike should join to demand that the college adequately pay and benefit their part-time faculty.

“I think the college wants to take advantage of part-time faculty,” another IC professor said. “And we’re taking the low pay because we love to teach.”

On Tues. Apr. 17, the Labor Initiative in Promoting Solidarity will be hosting a panel in which several part-time professors will talk about their working conditions here at IC. Students will be able to engage and ask questions. The event will take place at 7 P.M. in Textor 103.

Alyssa Figueroa is a senior journalism and politics major who is a member of the Labor Initiative in Promoting Solidarity. Email her at [email protected]  Photo courtesy of LIPS.