Home Haircut Get on Board
HaircutIthacaNews & Views 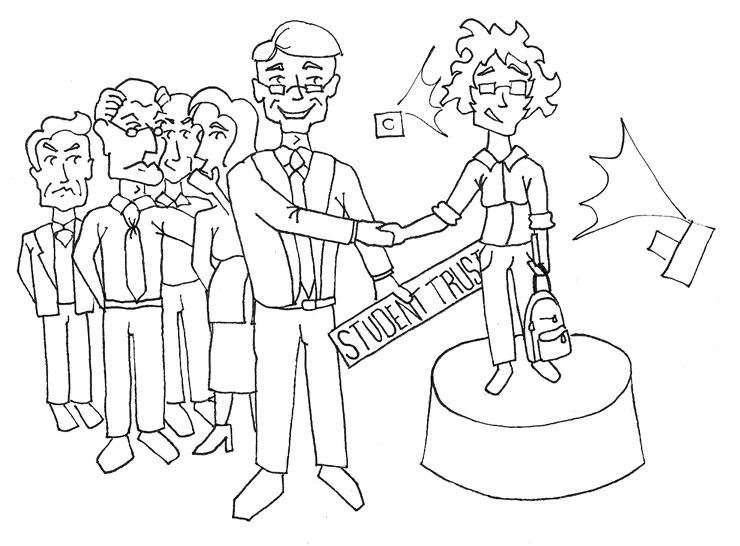 Later this year, in some sealed off meeting away from the student body, Ithaca College will appoint a new student trustee. The position places a single student on the College’s Board of Trustee’s for two years, granting them full voting rights on issues that profoundly affect the school’s population. They’ll sit on committees of IC’s largest benefactors with a chance to give voice to student concerns.

In short, the student trustee could be a force, someone who presses those in charge of our school and asserts influence at the highest levels of the administration. Instead, the current selection process all but ensures the position is a farce, a decoration that creates the illusion of student participation while keeping power away from those whose tuition funds the school.

The position falls short of its promise because the board itself ultimately selects the lone student representative, creating a situation in which there’s little chance for dissent. The SGA Constitution only vaguely designates the selection process, leaving it entirely up to the Board of Trustees. The Board appears to have taken full advantage of this power. Those interested in becoming a trustee need to apply to the current trustee, junior Elizabeth Stoltz who, along with Michele Lenhart, director of student leadership and involvement for OSEMA, assembled a team of students that will review the applications. This committee will interview those interested before passing on three nominations to the Board. Ultimately, the Board will conduct their own interviews before settling on their choice.

There’s no way of knowing exactly what criteria students have to meet in order to satisfy the Board members and join their ranks. The Intercom message inviting students to apply loosely defines the standards as people “who are engaged and invested in the success of Ithaca College, are of sound character and display a natural tact for working with others.” However, one has to wonder what constitutes “investment in the success of Ithaca College.” Would the Board of Trustees ever appoint a student who vocally dissents college policy? Like someone who campaigns to pay a living wage to all campus workers, a move which costs the school money? What about a student who advocates for an Asian American Studies program? Or even a person who questions the necessity of raising tuition to more than $50,000 per year?

It’s unlikely at best, because such a person would be a thorn in the side of the administration at Board meetings, complicating proceedings with student concerns. They don’t want that; they just want the appearance of it.

If the position is to hold any meaning at all, Ithaca College needs to open the student trustee post to democratic elections. Students could either vote directly for the trustee or even vote for the committee members who conduct interviews with the candidates. Students would turn out for these elections because the position could truly matter; if they have a stake in the process, they’ll be willing to participate. The trustee should be a permanent member of the budget committee, so that those who pay tuition have a direct say in the school’s cost. And, of course, there should be more than one student representative on a 32-member board.

Other schools hold an election for the position. Even Cornell, with a larger, more unwieldy student population, has a democratically elected student trustee. Why don’t we?

If the administration isn’t ready to implement some sort of vote, then it should drop the pretense of having interest in student concerns altogether. It shouldn’t bother asking Stoltz and other students to interview applicants before they talk to the Board because a committee assembled at the discretion of the Board, not by democratically elected student representatives, interviews the candidates. In fact, the Board shouldn’t have a student trustee at all if the current selection process is maintained because if the single student voice on a 32-member committee is selected by the existing members, the position becomes nothing more than a rubber-stamp slapped on the Board’s decisions. It looks like student participation, but only if you ignore the mechanism behind it.

Sam McCann is a senior journalism major and member of the Labor Initiative Promoting Solidarity who’s “invested in the success of Ithaca College.” If you’d like to talk more about transparency in student trustee appointments, email him at [email protected] or come to LIPS meetings on Tuesdays at 7 P.M. in Williams 218.

A Reason to Rally

Buzzsaw Staff and Alumni Call for Repeal of...