The Only True Feminists 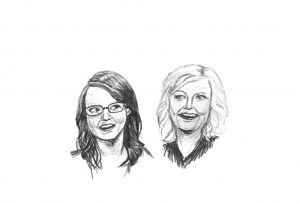 Tina and Amy prove they are absolute authority on equality

Standing tall and proud on the Golden Globe stage in their stunning and elegant ensembles that could easily pay for any struggling college student’s tuition, Amy Poehler and Tina Fey embody the pinnacle of everything that is right in Hollywood: they are our feminist heroes, our patriots, and our martyrs.

Both women have proven that white women can in fact make it in the business, even though much of their success was not derived from the big screen but rather inside cozy television screens hidden within the lackluster homes of the American middle class.

Besides the free booze and ego gratification that comes from attending one of the most heavily publicized TV and movie awards shows of the year, everybody goes to the Golden Globes to acknowledge the accomplishments of the systematically oppressed and marginalized groups in popular media. And through the sheer presence of superduo Fey and Poehler, the 2015 Golden Globes ceremony was transformed into the ultimate feminist awards show.

Riding the socially-liberal progressive rollercoaster, the Hollywood Foreign Press tipped its hat to two new TV shows honoring the marginalized and underrepresented: “Jane the Virgin” and “Transparent.” Regardless of those accomplishments, the best moment of the show was when the feminist queens took the stage, daringly making fun of the dethroned king of comedy, Bill Cosby. Standing in solidarity for female victims of sexual assault across the nation, Fey and Poehler proceeded to make rape jokes in order to fight misogyny in the comedy industry. While some viewers claimed that the dynamic duo were being disrespectful towards those who are victims of sexual violence, and specifically those allegedly drugged and raped by Bill Cosby, others believed that shock is inevitable in comedy and that what Fey and Poehler said was “not that bad,” especially considering that the jokes came from already victimized white women.

As the crowd of influential celebrities listened to Gina Rodriguez’s acceptance speech on why having diversity on TV matters, the two hosts made sure that a positive female Asian-American representation would help carry the show. Heavily stylized with geisha makeup, Margaret Cho joined the hosts playing Cho Young-ja, a fake member of the Hollywood Foreign Press and North Korean autocrat. Gliding stringently across the Golden Globe stage in her North Korean military uniform and speaking tyrannically in a deep accent, Cho’s performance was so realistic and authentic that some celebrities believed that Cho was actually a North Korean official and felt their sense of security slipping away, calling for backup security immediately.

While some found Cho’s bit to be a little too close for comfort, others expressed outrage, believing that the hosts were intentionally misrepresenting Asian-Americans and perpetuating harmful sentiments against North Korea. In order to neutralize the situation, Fey quoted Tracy Morgan in the first episode of “30 Rock” saying, “Affirmative action was designed to keep women and minorities in competition with each other to distract us while white dudes inject AIDS into our chicken nuggets,” with the added intention to help the public realize that all struggles are important and inherently in proportion to each other.

Despite the fact that “30 Rock” has been over for nearly two years, Tina Fey is still by far one of the greatest female writers, producers, and actors mainstream media has to offer. When asked what her secret was, she quotes herself playing Liz Lemon in the episode titled “The Fighting Irish” saying, “I pretty much do whatever Oprah tells me to do.”

Feminist god status is no stranger to Amy Poehler either, as the seventh and final season of “Parks and Recreation” comes to a close. Leslie Knope is finally getting around to building a park, only after running for city council, getting married, obtaining a more than stable income, creating Galentine’s day, as well as giving birth to three triplets and fostering a productive community of civil servants along the way. In essence, “Parks and Rec” has broken the glass ceiling, demolishing every stereotype as to what a white female protagonist is and can be.

However, at the end of the day, both goddesses of sitcom leave middle class audiences questioning if there is a need for female representation on screen anymore. In fact, many are wondering if it is okay to go back to male dominated entertainment pieces now that the two pioneers have obviously proven that women are indeed human beings capable of great things.

Michele Hau is a freshman culture and communications major who hopes she’ll be able to bag her a rich one. You can email her at [email protected].