Cortland resident Edward Wormsly woke up Wednesday morning to find his childhood dreams on his front porch, dead, next to a copy of his daily newspaper. Wormsly’s dreams were forty-eight years old when they passed on after a brave battle with doubt and familial obligations.

“It was really unfortunate the children had to see that,” Janice Wormsly, Edward’s wife of 14 years, said.  “Tommy-he’s our youngest- saw them, saw them just laying there. ‘What’s this stuff,’ he said. [sob.] He didn’t even know Edward had dreams.”

Despite Mrs. Wormsly’s grief for her husband’s late aspirations, friends and neighbors say it was a long time coming.

“Ed was always talking about being Spider-Man, always talking about saving the world. His ‘Great Responsibility,’ he called it. Thank God that’s over,” old friend and neighbor Richard Fink said. “I don’t think he realized he couldn’t actually spin webs, stick to walls, any of that stuff. I tried to explain it to him once, but it didn’t go over well.”

Nor did it go over well when Wormsly’s wife asked that he not address her as “Mary-Jane” at all times, or kiss her exclusively while hanging upside-down from a rope or name each of their three daughters ‘Aunt May.’

“Still,” Janice said, “He always had a great Halloween costume … even if it was the same one every year. Also, all of those comic books will be worth an incredible sum of money one day … well,  they better be worth something…” 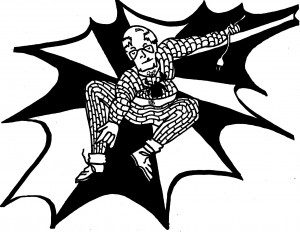 Authorities are attempting to pinpoint the exact cause of death of Mr. Wormsly’s hopes and aspirations. Wormsly, who wore a  full Spider-Man costume beneath his outerwear every day, was not one to succumb to
doubt. Or logic.

“We suspect the victim could’ve been saved if certain parties hadn’t consistently distracted Mr. Wormsly from his goals of keeping the area safe from Doc Ock with demands for Happy Meals and rides to soccer practice,” Sergeant Brockhaus of Cortland said. Brockhaus was seen glaring at the Wormsly children periodically throughout the press conference.

His partner, Officer Hughes, failed to comment, but did cough and point to where the Wormsly children were standing several dozen times.

“It’s so strange, with them being gone and all,” Wormsly, a Wegman’s Assistant Manager, said when asked about his now gone dreams. “I always figured I’d grow up to be Spider-Man. But I have to realize now, that’s simply not the case. I will never be Spider-Man.  But my son will be.”

Wormsly revealed his plan to begin sending his son Tommy to school each day in full Spider-Man regalia, including a mask and one-piece jumpsuit. He also vowed to make frequent visits to arachnid exhibitions and nuclear power plants. When asked if he thought his son might grow tired of the superhero get-up or frequent fiction-related field trips, Wormsly replied, “I didn’t raise a quitter. I know I was never able to achieve my own childhood dreams, but as a father I have a duty to live those same dreams vicariously through my son.”

Unbeknownst to Wormsly, however, Tommy’s dreams and comic book preferences are not the same as his father’s.

“I don’t really like Spider-Man,” Tommy said. “Batman’s the best. I read all of his comics.”

Despite his plans, Wormsly is still on the lookout for a place to tell stories about better times and speculate sadly about all that could have been.

“I’ve been scoping out some bars where I can blow off some steam,”  he said. “I found a place where a guy comes in every Thursday night and says he would’ve been a great dragon slayer if only his wife hadn’t gotten some expensive operation.  I think I’ve found a new home.”