I recently made it to Zuccotti Park in New York City, where I was able to take pictures and talk to several people at the encampment. There are obviously people of all different backgrounds from all different places at the park, so this small number I spoke to is in no way meant to be any type of broad representation of the entire crowd. This is a number of individuals who I had approached and who were willing to engage in brief, informal discourse. 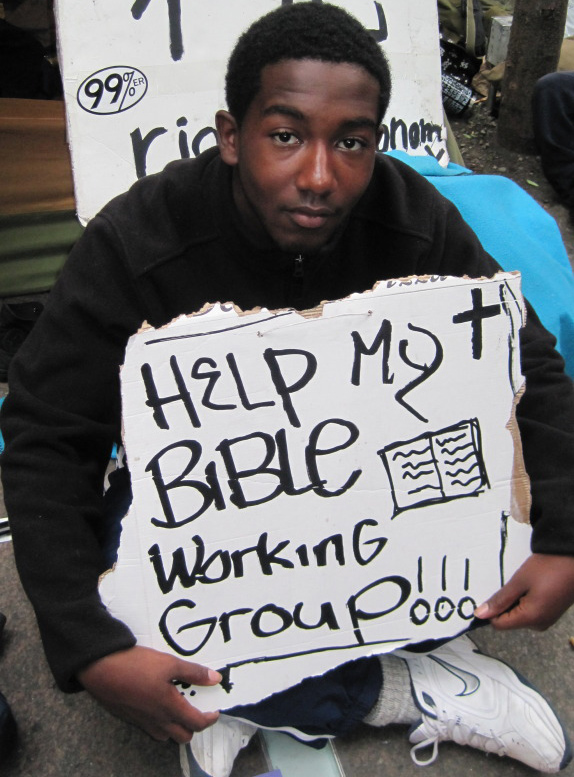 Though he does not describe himself as formally religious, Khorey started a Bible “working group” on October 19. The Bible, he said, is a book of stories, and people need stories. The group meets regularly at 6 pm to discuss stories from the Bible and apply them to the work they are doing at the Occupy protest.

When I asked him for an example of a Bible story relevant to Occupy, he referred to the Law of Attraction in Genesis and how you can attract everything that happens to you. It can be related to what he is doing at Occupy, he said, because if he is out there everyday, maybe he will attract more people to join.

Khorey said he would eventually like to become an EMT. 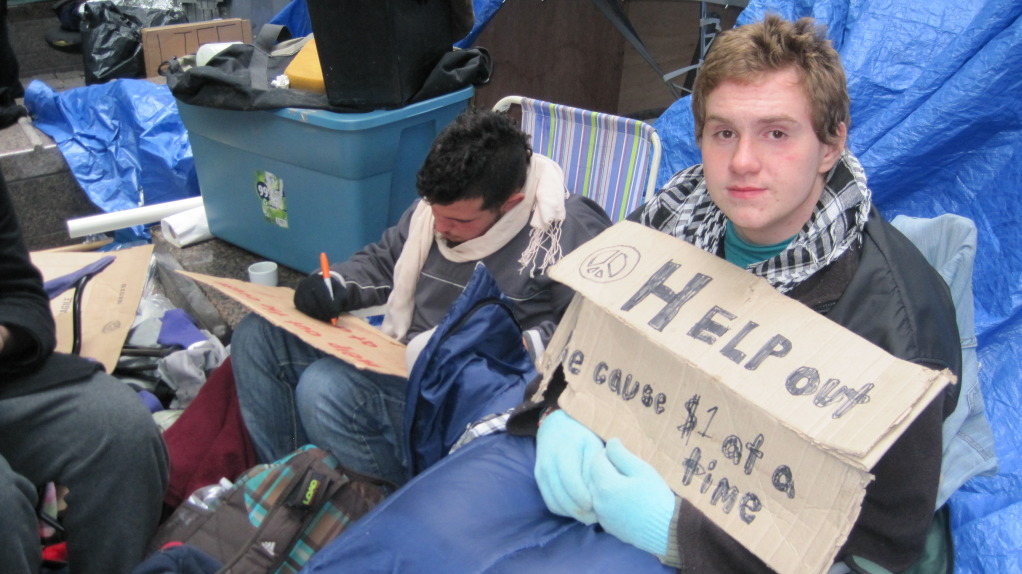 I tossed a small amount of change into a donation cup next to the group with whom Ryan was sitting. At one point while I was talking to him, a few professionally-dressed women came over and brought them socks.

Ryan and the other members of the group talked about continuing to occupy even after having items stolen — including an expensive laptop. When I asked Ryan about his hopes for the future, he said he wants to be comfortable and not have to worry about money so much. He said he first had to start thinking about the cost of rent at age 11, when his father lost his job at the Plaza hotel.

Barry hitch hiked his way to New York City from Tennessee. He said the trip up to support the movement as a way to honor his father, who recently passed away.

As it says on his sign (far left), he is currently collecting donations for a bus ride back to Knoxville, Tennessee where he has a packaging job, which he describes as “not a superb job but a job.”

However, he describes himself as a tattoo artist, which is how he previously made a living in Texas. 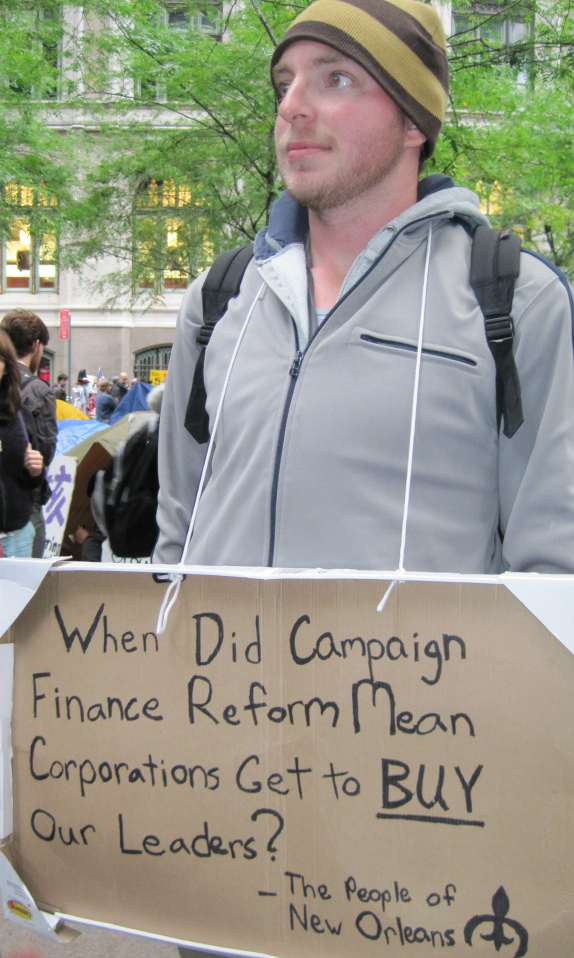 Zach said he has been waiting for a movement like this for a long time.

When I asked him about his sign, which reads “When Did Campaign Finance Reform Mean Corporations Get to BUY Our Leaders?,” he said it refers to the people not having a vote anymore when it comes to their leaders due to campaign contributors during elections.

He proposed a few solutions, such as shortening the campaign season from the current 2 years, and not only capping donation amounts, but restricting them to coming from “flesh and blood” contributors, as opposed to corporations.

While there are not as many perspectives associated with the Occupy movement in the south, Zach said he is glad to see some people in the country the way he does. He said he hopes to bring this movement back to the south when he returns. 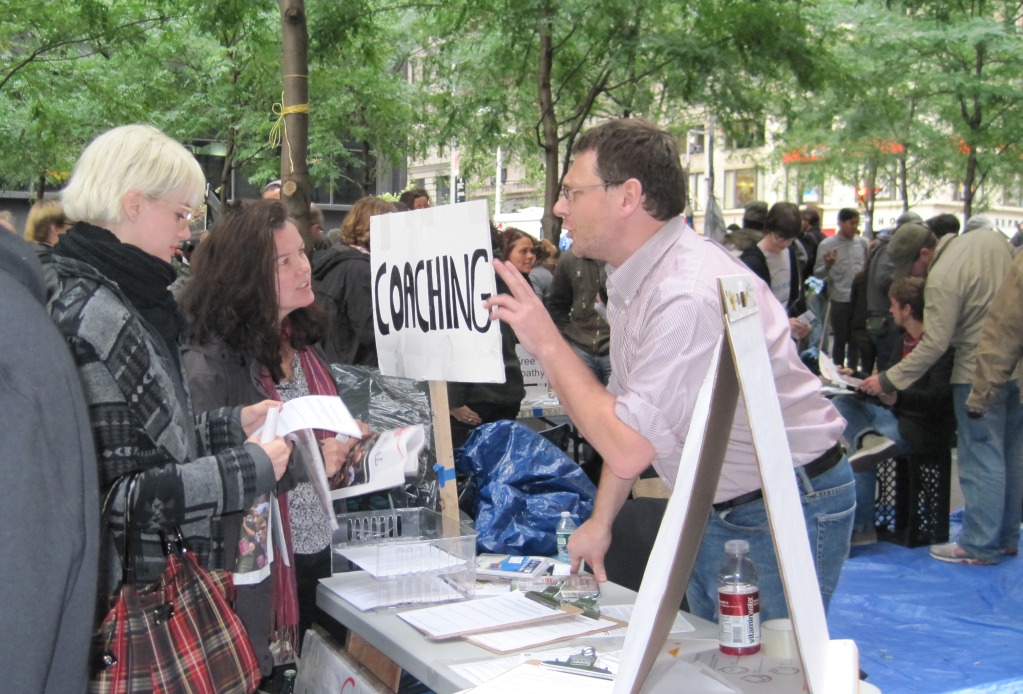 A representative from Coaching Visionaries had a booth set up at the encampment (in the photo on the right).

He stressed that the coaching his organization has nothing to do with advising or telling someone specifically what to do. Instead, they work on helping people find their own strengths, and how best they can be applied to the movement. To assess their strengths, people can fill out a form that asks questions such as (I took this directly off of the handout), “What really excites you and gets you fired up about Occupy Wall Street?” and “How do you envision a role or possibility for yourself within the movement?” before attending a free session with a volunteer professional life coach.

Just as I was leaving the booth, a girl approached the representative I spoke with, saying she felt “frazzled” because she needed help finding specific ways to apply herself to the movement. The representative gladly offered assistance. 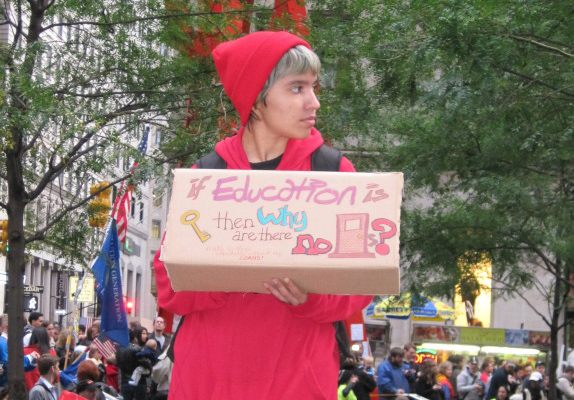 I saw Seth standing with a sign that referenced education and was instantly intrigued.

I asked her about her sign, which reads, “If Education is [image of a Key], then Why are there no [image of a Door]s?”

She said it refers to how “society puts education on a pedestal, but makes it virtually impossible” to obtain. Then when you leave, she added, you are in debt but making a salary that is less than the cost of your student loans.

Currently a high school senior, she is applying to colleges and looking to study either creative writing or graphic design. She said she has noticed that most financial help is in the form of loans as opposed to grants or scholarships.

She suggested that the financial aspect of education should go back to how it was in the 1960s. 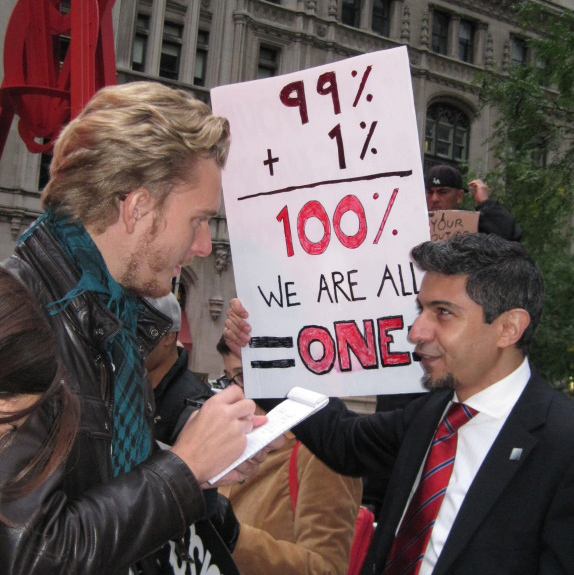 I spoke with Taha, a landlord who lives in downtown Manhattan, after having to wait for others to finish asking him about his sign, which read:

When I spoke with him, he told me that his sign represents an inclusive message, reminding us that we are all part of a whole, and that the movement is not an animosity thing.

He said his parents came from Egypt and achieved the American Dream” after coming to the United States. The American Dream, he said, has become an “illusion,” and needs to be brought back.

He compared corporate influence to an “institutionalized”, or “legalized form of bribery.”

Taha openly admitted being in the top 2-4% (he said he can not be sure the exact percentages). A woman rallying next to him, who bore a pin in support of Troy Davis, said that while she too is in the top percentages, she had been telling others not to ‘out her.’