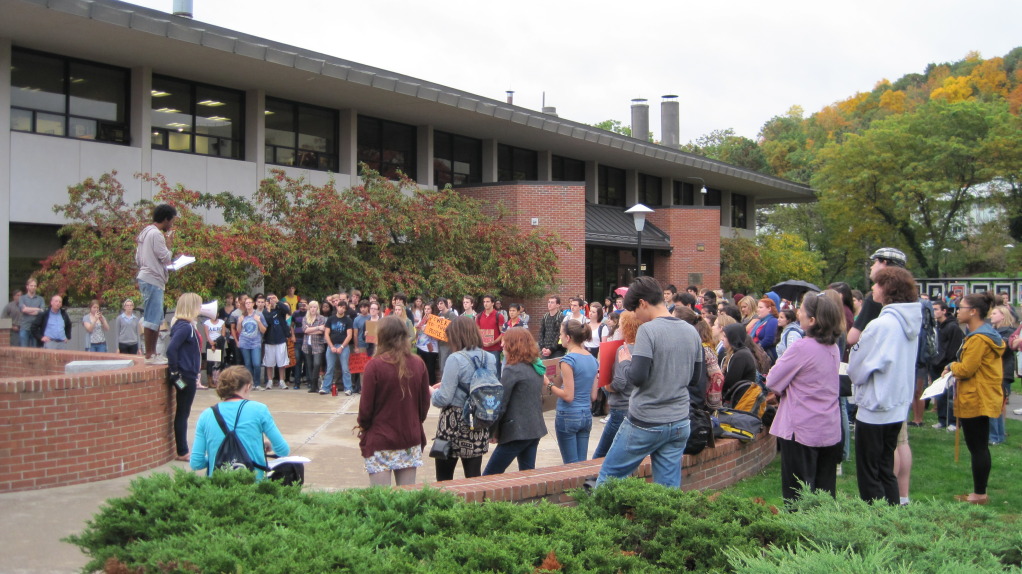 On Thursday, Oct. 13, Ithaca College joined an Occupy Wall Street movement with over ninety-two other colleges, with close to 200 students as well as some faculty participating in a walk out at 4:30 pm.

Students marched around the academic quad carrying signs similar to those held by protesters at the rally on the Commons last Wednesday. Some were more specific to how the current financial situation relates to students, such as a sign that read, “Thanks for the diploma … now what about my loans?” Chants included, “Hey hey, ho ho, corporate greed has got to go,” “United we stand, divided we fall,” and “Tell me what democracy looks like; this is what democracy looks like.”

The event followed with a series of speakers, who “took to the podium” at Free Speech Rock in front of the campus center. The first speaker was Ithaca College Politics Professor Tom Shevory, who talked about the history that led the current situation. Occupy Wall Street, Shevory said, is filling a “political vacuum” where political leaders have not held investment bankers accountable for their actions that have led to the crash of the banking system as well as vast inequalities and high unemployment.

Asking these bankers to be accountable, Shevory said, is a modest request.

“I think that’s one of the reasons this movement has so much energy – because it is a just movement.” Shevory said.

The next two speakers were Michael Smith, Associate Professor in both the history and environmental studies departments at Ithaca College, and Bob Proehl of Buffalo Street Books, which almost closed in Spring 2010 before switching to a co-op ownership business plan. Proehl talked to the crowd about the effects that large corporations can have on small businesses.

It began to rain, but no one moved. Between speakers, the crowd chanted, “Is the rain going to stop us? No! No!”

Several students, including organzers of the event, also addressed the gathering.

Hana Raskin, one of the organizers of the walkout, commended the crowd for their spirit of unity.

“We’re here today as Park students, as business students, as environmental studies students. We’re here from big cities, from small towns, but we’re standing here today united, and we’re brought together by our similarities rather than being divided by our differences,” she said. Rasking is from New York City and is protesting at Wall Street this weekend.

Following the speakers at Free Speech Rock, students marched around the academic quad again, continuing to hold their signs and chant in solidarity with the Occupy Wall Street Movement. 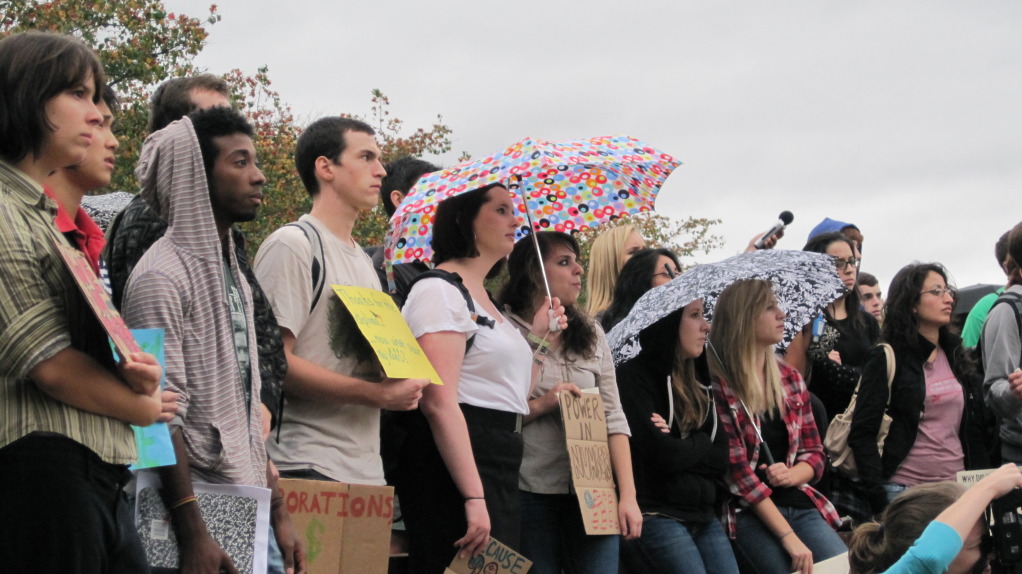 The event closed with students standing in a large circle in front of the entrance to the campus center. Anyone was free to address the crowd in the megaphone used previously in the demonstration.

Senior Pete Blanchard encouraged students to get to the protests in New York City as soon as possible.

The organizers announced that on Tuesday at noon, there will be an Ithaca College General Assembly on campus following a similar format to the meetings in Dewitt Park where working groups will be formed within the local movement.

At the end of the gathering, the organizers of the walkout collected names for a ride share to the occupation in New York City this weekend.

Later in the day on Thursday, in Dewitt Park, the grassroots movement of Ithaca and surrounding towns held their second meeting in Dewitt Park at 7:00 pm. Members from the previous meeting, as well as new attendees, showed up.

Raskin and another organizer of the campus walkout, IC senior Ren Ostry, were present at the meeting. They invited the members of the local movement to the Ithaca College General Assembly on Tuesday, encouraging the two groups to work together.

The meeting opened with a review of the hand signals for the meeting practices. It followed into updates from the working groups, who have started meeting regularly. Participants were then given a forum to make announcements about upcoming solidarity events in the area, such as a rally in downtown Binghamton Saturday and a rally at Cornell University at noon today.

During the soap boxing portion of the meeting, a question that had been brought up at the open meeting Sunday —but left some still feeling unsatisfied — was revisited: Beyond declaring solidarity with the protesters on Wall Street, what are our goals?

This time, the question opened a discussion of how to take the “macro” movement at Wall Street and make it into a “micro” movement locally.

Mike, of Ithaca, suggested that before the next meeting, everyone thinks of their community and what may hold them down. As a recent graduate of Ithaca College, he gave the example of loans for students.

“If all of these other Occupy movements dropped off the face of the earth, what would we do here?” he asked.

The General Assembly methods will continue meeting twice weekly, once on the weekend and once during the week to allow for the greatest amount of participation.

Junior journalism major Gena Mangiaratti has been following the “Occupy Wall Street” movement in Ithaca and nationally. Check out all of her entries about the protests HERE. And read all of Buzzsaw’s coverage of the Occupy movement HERE.