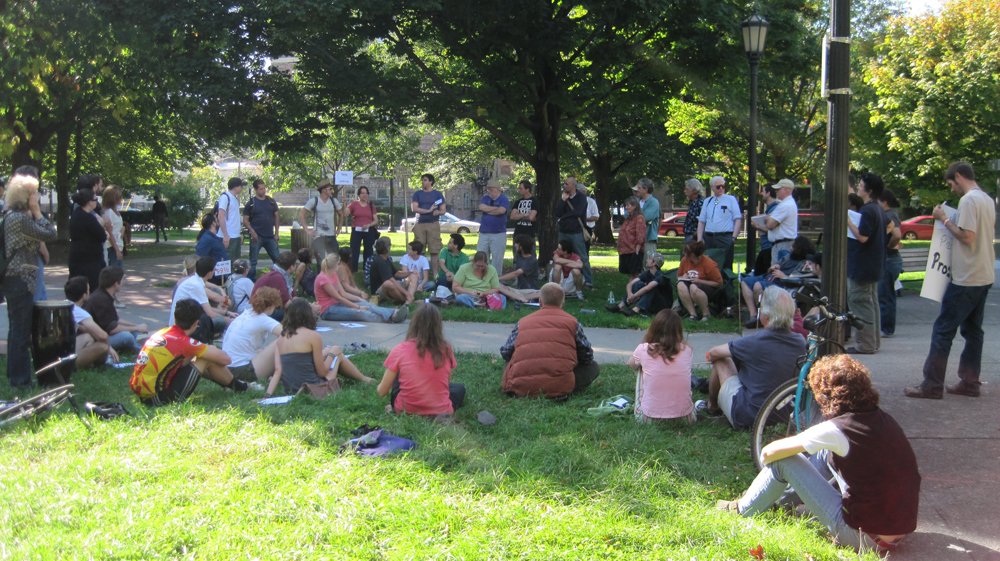 About 60 members of local communities in and around Ithaca who are in solidarity with the Occupy Wall Street protests met in Dewitt Park at 2 pm on Sunday, Oct. 9.

The meeting opened with a general introduction and announcements by Lucas Bonnet, a grassroots organizer from Trumansburg. Bonnet opened the meeting by thanking everyone involved, naming local organizations who have been active in the solidarity movement, such as GreenStar, who donated garlic and ginger to protesters at Wall Street.

He announced the daily meet-ups on the Commons, each day at noon, and also made everyone aware that they can make an open call for protests at any time on the movement’s many online forums or otherwise. 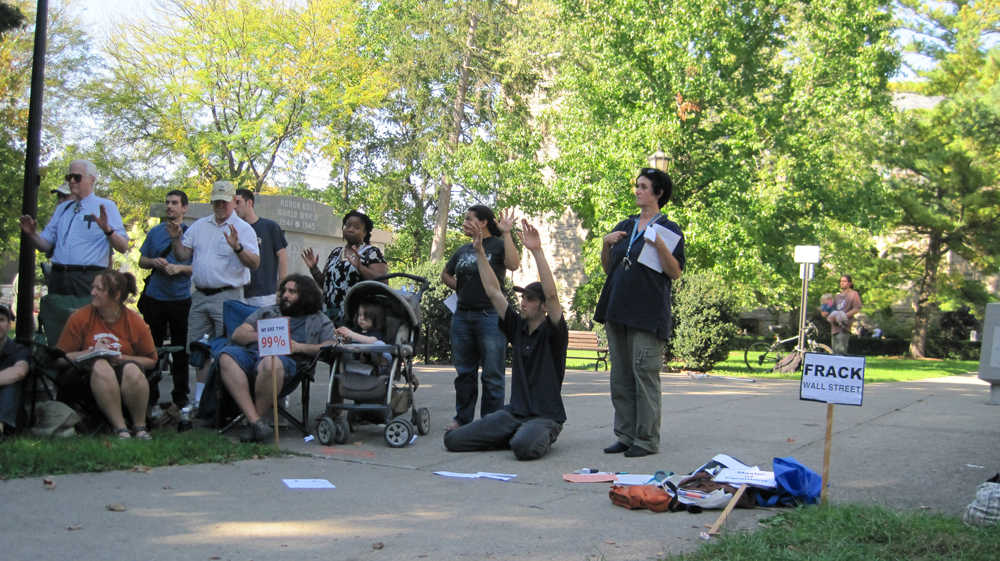 Bonnet noted that this particular gathering was not a general assembly, as its process of events did not mirror how every solidarity gathering would be conducted.

Nonviolence, Bonnet said, is one of the most important aspects of the movement. He reminded everyone to be respectful of one another’s viewpoints. Stevens stressed that no one should talk over one another at the gathering.

The meeting then followed into introductions by all who were present. Joined in a circle, some standing and others sitting on the ground, attendees at the meeting stated their name and reasons for why they were there. As well as Ithaca, those present had come from Cortland, Syracuse, Elmira, and other surrounding areas. They were relatively diverse in terms of age and status. Present at the meeting were two Ithaca College students who are trying to expand student involvement in the movement.

While their individual stories differed, they all agreed on being in solidarity with the discontent that has fueled the Wall Street protests.

Kevin, a student at Cornell, said in his introduction that the movement is the only hope for his generation to live a good life. He said they currently do not have any one particular politician who represents them – but that they don’t need one.

“We are our own voice,” Kevin said.

David, an Ithaca resident from Sweden who has been in the United States for four years, asked how a country as rich as the United States can keep so many people poor. There is no reason why it should be this way, he said.

An attendee who introduced himself as Robert said he is not an activist, just someone who would like to have a nice life, and that he would like to have his feet on the ground in his country without his needs being belittled. His expression remained relatively stoic as he spoke, but showed a hint of a smile when he was done, passing along the “Now talking” sign used at the meeting to minimize interruptions when one person is speaking.

In lieu of clapping and other non-verbal interactions, attendees at the meeting adopted hand signals used by the occupiers at wall street, to avoid extra noise that could make it difficult to hear the speaker. These include:

I also took a video of grassroots organizer Kat Stevens, of Cortland, demonstrating the hand signals (not in the same order as above).

The hand signals contributed to the overarching feel of democracy at the meeting, allowing everyone an equal opportunity to speak, as well as participate to the best of their skills and time allowance. Multiple attendees suggested that as a local movement, they should try to branch out beyond Internet outreach in order to best include everyone, such as through word of mouth.

The next task at the meeting was to establish weekly meeting times. They agreed to have two meeting times so far, continuing to meet in DeWitt Park each Sunday at 2, as well as meeting once during the week to accommodate those who work on the weekends.

The attendees then went on to establish the working groups that would make up the local grassroots movement. Everyone present was given the option to give input on what types of working groups to form, and who wanted to be in each one. To allow everyone a chance to provide input, Stevens established “stacks” at each step, where attendees who wanted to make a suggestion would state their name in order to be added each stack. Stevens then called the name of each person in that stack, giving everyone a chance to speak.

Each working group was established to be autonomous, with no individual in charge of each. Among the working groups created were direct action, outreach, logistics (security, medical, legal), technology, as well as a group dedicated specifically to establishing solidarity with the Wall Street protests by organizing trips down.

At the end of every meeting will be “soapboxing,” where all in attendance will be allowed to voice their individual opinions and suggestions.

Junior journalism major Gena Mangiaratti has been following the “Occupy Wall Street” movement in Ithaca and nationally. Check out all of her entries about the protests HERE.