Why You Need to Be Part of the Occupy Movement Now 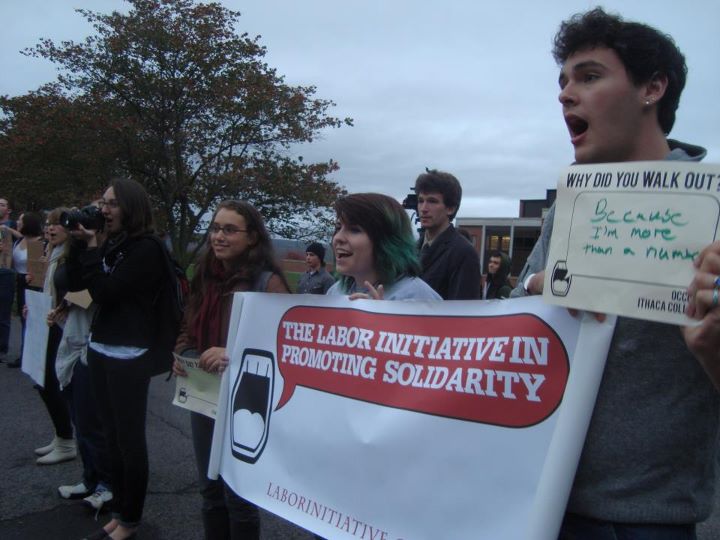 I remember in the Spring of 2010 when a few other students and I met in an empty classroom to talk about the low wages Ithaca College’s dining service workers were receiving. About six people showed up regularly to our meetings back then. By the time we became the Labor Initiative in Promoting Solidarity and had a protest in Spring 2011 on campus, nearly 50 students joined in the march on-campus to downtown, where we were greeted by nearly 100 community supporters. It was remarkable — LIPS was truly grateful to have such support. Yet, when I saw my peers rally at Free Speech Rock in the culminating protest — students I had never seen before — I couldn’t help but wonder, “Where were you when we needed you?” Where were all the students when we needed them to speak to workers, do research and organize initiatives around the most glaring injustice on campus? Why did they only show up for the action-packed rally at the end?

Movements grow, naturally. Of course, there will always be fewer people at the start of a movement, as members try to raise awareness and recruit others. However, I did not understand why, when students became aware of the living wage campaign — which many were — they did not immediately jump on board. LIPS did countless hours of legwork, and then students joined in the glory near the end.

Today, as I reflect on the Occupy Ithaca College rally, I see similarities. Students are aware of the Occupy Wall St. protests; many were also aware of the rally yesterday. This Occupy movement, which calls for stepping up, taking back your community and utilizing the power of the people, is a crucial development. For me, it is the only thing worth thinking about, discussing and being a part of. I know college students are busy, but every club they are in, every job they have to work, every time they stress out over homework or simply get angry about how busy they are — it all comes back to Occupying Ithaca College, Occupying Ithaca and Occupying Wall Street. All of the eggs are in this basket.

If you are aware of the movement and support the movement, you must be with the movement now. You must help with the legwork. Do not just come take part in a lively action and then fail to come to the Ithaca College General Assembly on campus this Tuesday. Do not scream about injustices for an hour one afternoon and then disregard attending the Occupy Ithaca General Assembly meetings with the community downtown. Do not sit in class rolling your eyes at students who will “accomplish nothing” by walking out and then come out to the big rally at the end when these students prove to you they can accomplish something.

This is the case for several students I spoke to who refused to walk out — they did not believe the movement would bring about any change. Perhaps it won’t. There has been a strong tendency in this world for a lack of true change, and therefore, it “makes sense” for nothing to come of this. Just like LIPS’s fight for a living wage — it didn’t “make sense” for Sodexo, a multinational corporation, to lower their profits in order to pay their workers a better wage at Ithaca College. (After all, that’s what business is about.) But, perhaps, if we take a leap of faith, change may be possible. Although a fight for a living wage is far less difficult and complex than a fight for a new societal system, the only way we may see change, perhaps, is by believing in a miracle. Plus, the only way the Occupy movement can start making those clear, concrete demands people are criticizing it for lacking, is to get every one together to talk about what makes them angry in their daily lives and ways we can change that. Be a part of that discussion.

Yesterday, some students walked out of class risking an absence, risking missing work, and risking the critical judgment of professors or fellow students, all in order to stand in solidarity with their peers. Down by Wall Street, protestors are risking getting pepper-sprayed, arrested and beaten to help those who have been affected by Wall Street (nearly everyone in this country). In Egypt, people risked death (and 846 people actually died) to get rid of a dictator and have a more democratic society. You have to join the others that are risking for you now.