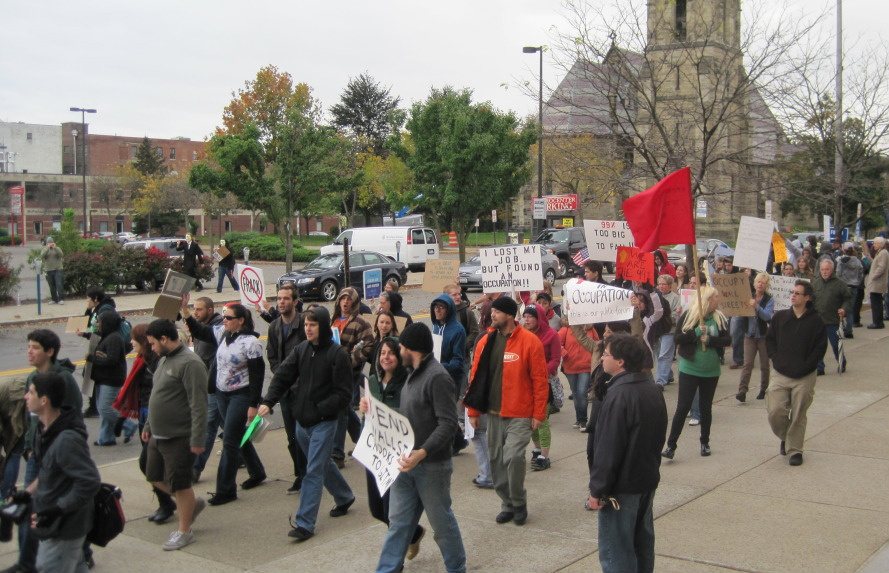 On Saturday, October 15, the Global Day of action, about 300 people showed up to “Occupy Binghamton,” a protest that is part of a grassroots movement organized by a large group of people, including Binghamton University, Broome Community College, and the union AFO-CIO. The event began at the park located at the corner of Court St. and State St. in Binghamton, where participants gathered to hold signs for an hour before having a general assembly and citizen speak out.

Cars passing by honked their approval. Some participants could be overheard remarking to each other, “Don’t honk, join us.”

Stuart, a student at Broome Community College, showed up at the gathering with a small American flag, which he held in lieu of a sign for the early part of the event. He told me he brought the flag in response to comments that the Occupy movement is “unAmerican,” and that everyone in it is simply “against capitalism,” when the movement is really a call to address corruption across the board and hold the “country’s best interests at heart,” he said.

Two police officers stood nearby but did not interfere. A young woman held a sign stating, “They are also the 99%” with an arrow pointing in the officers’ direction.

During the first citizen speak out, William Huston of Binghamton reinforced the ideas of compassion and nonviolence.

He commented on the popular Guy Fawkes masks worn by members of Anonymous that have been appearing at Occupy movements nationally.

Echoed by the People’s Mic, Huston expressed his concerns about the wearing of the masks. 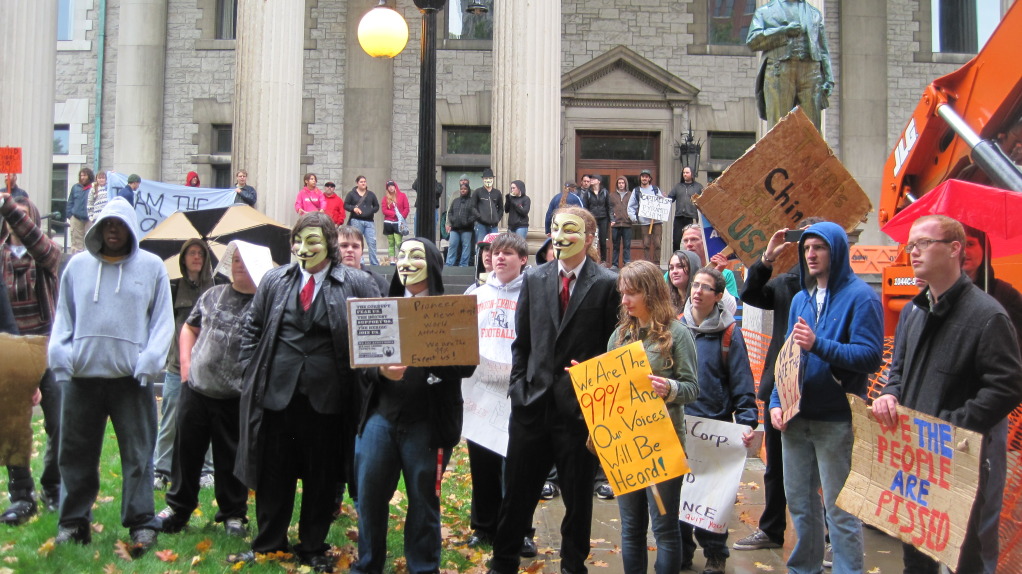 “I want to say, I don’t understand this. Guy Fawkes, I must tell you, was a bomber and an assassin,” Huston said. “Violence is unnecessary. The principles that I am fighting are nonviolence and compassion. We need to drop our resentments of all people. And we must work for the common good.”

Still, Guy Fawkes masks continued to be worn by several participants through the rest of the event.

The gathering had attracted people of all ages and statuses. The speak out illustrated how they are all affected as part of the 99% in different but similar ways.

Mik, a “suburban stay-at-home mom,” encouraged people to reach out to other members of the ninety-nine percent who were from a different “walk of life.”
“I’m really fortunate to be able to be a stay-at-home mom,” she said. “We’ve decided that that’s what’s best for our kids, and I’m probably a dying breed. People can’t afford to do this anymore. So what I would say to you guys is don’t talk to the people who look the same as you. Walk around and find someone who looks like they’re from a different walk of life. Talk to them; they’re part of the ninety-nine too. We’re all in the same boat. Some parts of it might be a little lower in the water than others, but it all going to sink if we don’t do something.”
Nico, who opened his speech stating that he has both a history degree and a teaching license but no job, said he was recently diagnosed with Brugada syndrome after he collapsed Thursday while at training for a job and was rushed to the ER, where he was kept overnight.

He left the hospital Friday morning — against medical advice — because he had to go back to work to afford the hospital stay, he said.

“I don’t know about you — it seems kind of fucked up to me that I had to do that,” he said.

“I know that Vestal is considered rich, but teachers have been laid off — one I know who is a substitute now,” one of the girls said. “I have to admit I am scared for my future, and [that of] others’ who I know. I think that the future might look up if any of this helps at all.”

Following the speak out, the gathering went on a march through downtown, participants holding their signs and chanting as the walked. They briefly paused in front of the post office on Henry Street before walking back to the park. Having gained momentum, participants again held signs, attracting many honks from cars passing by. Their chant, “We are the 99 percent,” at one point became, “You are the 99 percent.”

The meeting ultimately reached the front of the court house on Court St., where participants held another citizen speak out, then broke off to exchange contact information, a step toward forming working groups for the local movement.
At the time, there did not seem to be a unanimous decision on whether or not they will occupy Binghamton the way protestors occupy Zuccotti Park in New York City.

One participant suggested that they should not “rush into occupation,” as Binghamton does not have the same layout or facilities as New York City. Another participant emphasized the importance of forming working groups as a way to keep the movement going forward: whether or not they have a continuous occupation like Zuccotti Park, or come back once or twice each week, he said.

There is another general assembly planned for Monday, October 17, at the same park where today’s protest took place at the corner of Court St. and State St., also dubbed “Binghamton’s Liberty Park.”

UPDATE: As of about 9:30pm Saturday, there are occupiers camping out in the park, according to the Occupy Binghamton’s Facebook page.