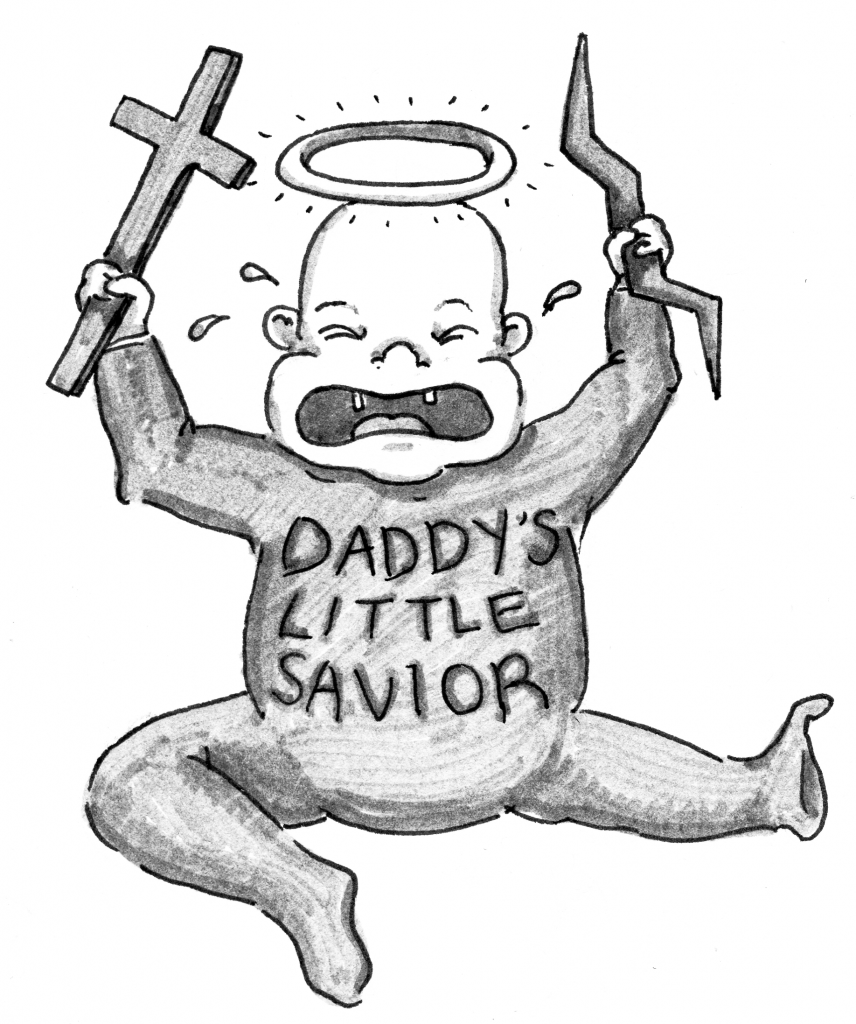 LORDES, FRANCE — The Virgin Mary, mother of Jesus Christ, Lord and Savior to many and revisionist troublemaker to some, appeared to three young women, about 16, in a pasture this week and confessed to them that Zeus may, in fact, be the real father of the Messiah. The girls, who had been speaking of their own sex lives when the incident occurred, were shocked when the Israeli woman appeared to them in a flash of golden light.

“We were just, like, minding our own business, talking about when we’d last had a French tickler – well, here, we just call that a tickler, you know,” said Thérése Baudin, 15, apparition spectator and local sexual dyanmo. “[Mary] showed up and started gabbing about how Joseph hasn’t touched her since Jesus was born. ‘It’s been millenia!’ she yelled, as if we could relate. Then, out of nowhere, [she] confessed that she isn’t exactly sure who the father [of Jesus] is.”

According to the eye witnesses, Mary is further quoted in saying: “I just feel really guilty and need to dish, you know? Joan of Arc and Mother Teresa just aren’t picking up what I’m putting down.”

While no paternity test results have been reported, there is growing suspicion that these claims may be true. The Lady of Lourdes has not appeared since and no official statement has been made by the Holy Family, despite the media’s efforts to shed some light on the situation.

Hera, wife and public relations manager of Zeus, has come out on behalf of the Greek god, saying: “There is no possible connection between my husband and this supposedly-virginal woman. After the whole swan catastrophe, I have personally held him under close wraps and can attest to his innocence.” The goddess later stated an alibi, claiming that 2000-some odd years ago, around when the conception of Jesus occurred, Zeus was “punishing some peasants for their meager sacrifices . . .one of his favorite hobbies.”

There is much concern regarding the reaction of the King of the Jews himself. With a current worldwide following of about 2.1 billion people and a strong Judeo-Christian platform, the Son of Man has a lot at stake. Although no formal release has been made, some sources spotted Christ in New York City this week during one of his famous bicentennial visits, clad in yellow corduroy pants, a baja jacket that resembled the Jamaican flag, and brown flip-flops. He was overheard in saying: “So what if I turn out to be a Greek demi-god? Why does that change my life’s work? If anything this would make me even more badass.” He spread a hearty amount of cream cheese onto his genuine New York bagel, continuing: “You don’t get to read about the time I fought the dragon or that kid I turned to stone in the New Testament. . . Now, those would make some hella myths.” The 2014-year-old deity adjusted His beanie before grabbing His iced coffee and exiting the establishment without commenting further.

This still leaves the question, however, of the other two-thirds of the Holy Trinity.

God prophesied for a virgin woman to bear Him a son, but if not Mary, then who? Although there are many suppositions by the media, one name continually resurfaces: Lady Gaga. Although the singer/songwriter/Cirque Du Soleil performer claims to be only 27, there is question about her real age. Gaga’s fashion styles, music, and general life choices seem to hint at an other-worldly knowledge she somehow possesses. Can this possibly be from walking the Earth for the last two millenia, never realizing her true purpose? The surrogate mother of God was destined to be assumed, body and spirit, into Heaven. Does that mean that the pop star’s mortal form is impervious to decomposition, granting her immortality until her mission is fulfilled? Her many references to Christianity within her 2011 album Born This Way indicate that this is exactly the case. The “Mother Monster” could not be reached for comment.
To further discredit the Virgin Mother’s story, Mary claimed to be impregnated by the Holy Spirit. However, sources indicate that the Holy Ghost was not where he claimed to be that day. At the time of conception, the Spirit was allegedly “becoming one” with an anonymous man, as He was known to do, inspiring the paramour to write fictional stories “from which the people can learn valuable lessons.” It is supposed that during this particular incident, the Book of Proverbs was created.

With all the evidence against her, the Lady of Guadalupe’s reputation is hanging in the balance. Zeus is best known for his consorts with mortal women, and, despite Hera’s statement, it is believed that after running the mill of Mediterranean women, he branched out to Palestine for a taste of something exotic. As for the motives of Mary, what better way to mask the embarrassment of being just another Greek god’s bootycall than to claim a role in the redemption of humankind?