An Open Letter to the Biggest Buzzkill in Ithaca 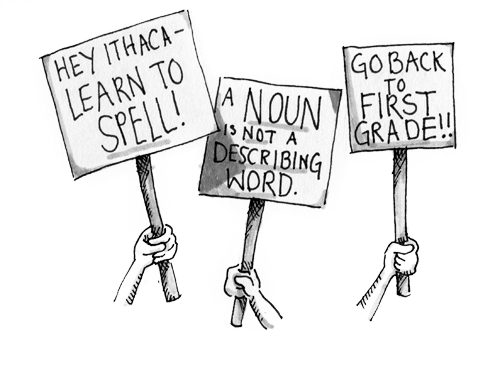 So Grammar Nazi, we meet again. Was your relentless mission to stop all Cornell students and faculty from ending a sentence with a preposition not enough for you? Were you not satisfied with correcting the grammatical errors on every single post that showed up on your Facebook News Feed?

Well my friend, or shall I say foe, it has recently come to my attention that you are now petitioning to have the “Ithaca is Gorges” slogan banned simply based on its improper use of grammar. So I’m just going to go straight to the point here and say that “Ithaca is Gorges” is one of the best marketing gimmicks to ever have been created.

You see, Grammar Nazi, it’s a lot like the words ‘I love you.’ Those three words just hold so much meaning. I do believe the magnificence of this phrase has gone straight over your head. I understand you despise puns, but for someone of such superior knowledge of the language arts, I am honestly shocked that you find absolutely no amusement in the “Ithaca is Gorges” motto. But allow me to humor you for a moment.

What concerns you is the word “is.” “Gorges” is a noun. A noun is a person, place, thing, or idea. Am I doing okay so far? A noun cannot describe another noun. Adjectives are what describe nouns and adjectives almost always come after passive verbs like “is.” Let’s give this lesson an example because that’s what always helped me in second grade. The word “gorgeous” is an adjective. So, if I were to say, “Ithaca is gorgeous,” I would be grammatically and not to mention factually correct.

Let’s take this from another angle. What if we used a possessive verb like the word “has?” The phrase “Ithaca has gorges” exhibits proper use of grammar. Not to mention, this phrase, like the phrase “Ithaca is gorgeous” is also factually correct.
You know, it’s funny my dear tyrant, while giving myself a swift refresher course on the proper way to form a sentence, I discovered something rather comical. The words “gorgeous” and “gorges” sound awfully alike, wouldn’t you agree? Don’t you just love the English language?

Let’s continue with the fun and just for a moment, put ourselves in someone else’s shoes. Say you are, I don’t know, the head of a marketing company hired to create a quick, catchy slogan to bring tourists to a small town in central New York. You are told to emphasize on this small town’s best features, but here’s the catch: you can only do it in three words. Well let’s see, Ithaca’s best feature is arguably its numerous waterfalls and gorges. And wouldn’t you agree that because of these gorges, Ithaca is gorgeous? How about we combine these two concepts and see what comes of it. Ithaca is Gorges. Yes! I do believe that covers everything we are trying to accomplish. It’s catchy, informative, and relatively humorous. Genius, really.

Now putting all fun and games aside Grammar Nazi, seeing as your previous attempts to make the world a more well-spoken place have ultimately failed, I think you will find it in your best interest to put this petition to rest as well. I mean, what exactly were you even trying to accomplish anyway? Were you looking to change the slogan or just get rid of it all together? I don’t know much about marketing but I’m pretty sure people would be less likely to walk around wearing a shirt that says “Ithaca has Gorges” or “Ithaca is Gorgeous.” The latter just seems incredibly arrogant, if you ask me. There are other places in America besides Ithaca, New York that are just as gorgeous if not more and you don’t see those places tooting their own horns so openly.

I believe I speak for the entire Ithaca community as a whole when I say that your petition is a lot of dumb. It has very stupid. Ithaca is Gorges. Ithaca is gorges as much as Cornell is scary, gothic buildings. Do you get what I’m saying? You feel me? Are you picking up what I’m putting down? Catch my drift? No? Didn’t think so…