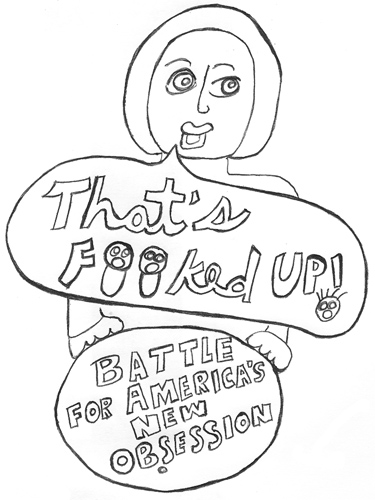 Love them or hate them, reality shows are becoming a tent pole of American television. The growing presence of reality programming is what inspired veteran producer, Lance Roan, to develop his revolutionary new show, That’s F***ked Up: Battle for America’s New Obsession. The show will be a competition, but instead of seeing which contestant can stuff the most cockroaches down his or her pants or which prostitute has the nicest singing voice it will be to determine which producer can create the most morally depraved reality show. The type of show that you can’t turn off, even though it’s making you hopeful that the Mayans were right and this horrible planet we call home will be destroyed soon.

The producers will work on their respective series and compete in challenges to win celebrity cameos and crazy shooting locations with one of their shows premiering each week. This will really be shows within a show; reality show-ception, if you will.

All six producers will live in a mansion together as they compete. They have no access to the internet, cell phones or the mass media. Only alcohol.

Bellow are reviews of each reality show that is featured on That’s F**ked Up!

Prom queen? More like expecting mom queen! This show will aim to see who is the hottest mom under 20. It will highlight all the glitz and glamour of dropping out of high school and working part time at Target. The winner will win a scholarship to the beauty school of her choice.

—I planned to give this show a 5 but after I heard that producers convinced a seven-month pregnant Mandy to wear a tube top to a job interview, I had to bump it up to a 6.5.

Ty and the gang take their home décor magic to America’s street dwellers. In the season premier they visit a 72-year-old Vietnam veteran who has been living in a cardboard box for two years. The design team brightens up his sleeping quarters with a skylight and help improve the structural integrity of the box by adding crown molding. The team, however, encounters some issues when the box can’t support the crystal chandelier they install.

—This show actually does a great job portraying the homeless with dignity and respect. Because of this I can only give them a 4.

From the producers of Dance Moms comes a show that lets the boys in on the action. Fight Dads follows fathers who enter their sons into underground fight clubs in order to pay off their own gambling debts.

—Fight Dads is almost like a real world Hunger Games. But instead of the games being over when only one competitor is left, they’re over when the boys sustain bruises and cuts that would raise suspicion from their teachers.

Inspired by the, “It Gets Better,” campaign, It Looks Better also aims to aid the lives of gay teens dealing with discrimination and hate. Except, instead of focusing on getting kids to love themselves because of who they are as people, it allows them to love themselves because they finally look fierce. As producer Charlie Bohse describes, “A lot of these kids are cast out by their parents and looked down on by their entire schools. But maybe if we give them fabulous make-overs things won’t seem so bad.”

—Not only does this show do a great job of trivializing the issue of bullying in schools, Brandon, 16, delivers some super bitchy, super awesome catch phrases from start to finish.

This daring new show catalogs the struggles and issues of wealthy, white adolescenct teens living in Newport, Rhode Island. Producers Mya Riely and Steven Roberts said that they felt that shows like My Super Sweet 16, Gossip Girl, One Tree Hill, The O.C., The Hills, The City, Real World, 90210, Melrose Place and Greek didn’t adequately or accurately document the plight of well off white kids. RHWK will focus on problems like deciding between an SAT class or private tutoring, the awkwardness of driving the same car as superintendant of your high school and having your first male modeling shoot on the same weekend of your lacrosse tournament.

—Once again, I was going to give this show a lower rating; then half way into the first episode Chad, 15, referred to his maid as “the help.” Also, his name is Chad.

6. Can you handle Arizona?

First time producer Nina Westbrook takes advantage of the fact that Arizona lawmakers have lost their minds. In this show, five contestants move to the state of Arizona to see who can “stand the heat.” Contestants include a young Mexican-American boy who is unable to study his people’s history in school; a female college student who is denied a legal abortion because she was determined to have been pregnant 2 weeks before she had sex; and an African American man who is pulled over everyday on his way to work. Who ever is able to deal with life in Arizona the longest wins 5 million dollars.

—Forcing people to live in Arizona is just plain wrong.

Katie Talay is a sophomore TV-R major who has not missed an episode of Tots in Tiaras. Email her at katalay1[at]ithaca[dot]edu.