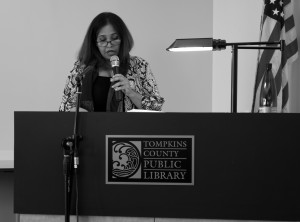 Sonali Samarasinghe is the 2012-2014 Ithaca City of Asylum’s writer in residence. Ithaca City of Asylum (ICOA) is part of a network of organizations that provide sanctuary “to writers whose works are suppressed, whose lives are threatened, whose cultures are vanishing, or whose languages are endangered.” Each year in conjunction with Banned Books Week, ICOA and the Tompkins County Library present some of these writers’ work in an event called “Voices of Freedom.”

Samarasinghe was a Sri Lankan journalist forced to leave her country after her husband, Lasantha Wickrematunge, the editor-in-chief of a prominent Sri Lankan newspaper, was assassinated by the government. At Voices of Freedom, Samarasinghe read from a book in progress. This is a recording of Samarasinghe’s reading from this book featuring Pablo Cohen, Associate Professor of Music at Ithaca College, playing “La Casa” by Carlos Gustavino on classical guitar.

Recorded and Edited by Lucy Yang