Aunt Flo’s in town and she didn’t bring brownies

“The date was going really good when I suddenly got that feeling that something wasn’t right down there. I excused myself to go to the bathroom, and as soon as I got in the stall I knew. I got my period,” said 18-year-old Marlee Pelton-Fuentes. 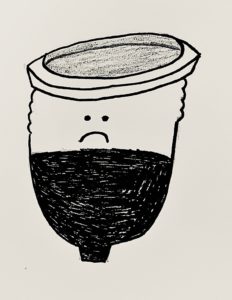 “I bled through my underwear and my leggings – I was so nervous I didn’t know what to do – and didn’t know how I was going to be able to get him to bring me home so I could change and fix myself. As we were leaving I told him I needed to get something from my
house before we hung out and he obliviously agreed. I clenched my legs together in what seemed like the longest drive home ever. I was terrified of getting blood on his car seats. I sprinted inside and changed as fast as humanly possible. Luckily he never knew and didn’t end up finding out until later into our relationship.”

Pelton-Fuentes’ story is not uncommon. In fact, it has a name: Period shaming. Period shaming is when people feel like their menstrual cycle is something they need to hide. It comes from menstrual taboos in Western culture that stigmatize periods as gross, unclean, and something that should neither be discussed or nor visible.

In fifth grade, I would pray that when I wiped, I would not find red splotches on my toilet paper, but one cold February evening, as I rose from the toilet to pull up my pants, I noticed a red watercolor painting in the water. Low and behold, Aunt Flo had arrived. I remember crying and feeling so embarrassed that I didn’t tell anyone but my mom for two whole years. I grew up in a household that was very comfortable with dialogue pertaining to bodily functions. We embraced the words vagina and penis and never used pseudonyms like “vajayjay” or “peepee.” So why was I so embarrassed about my menstrual cycle?

Although research is slim, many organizations and companies, such as THINX, a brand of period-proof underwear, are trying to understand period shaming’s origins and eradicate the humiliation suffered at the hands of Aunt Flo.

THINX employed OnePoll (a survey-led marketing research company) to conduct a survey for them in 2017 that sampled
1,500 US women and 500 US men on the topic of period shaming. The results are not surprising. 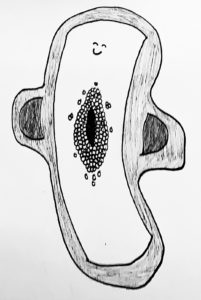 experienced period shaming. One in five women have felt ashamed of their period because of comments made by a male friend.

A spokeswoman for THINX said to Menstrual Hygiene Day, “Period-shame is something a lot of women feel, starting with their very first cycle, which can occur as young as eight years old. Those feelings of embarrassment and self-hate are then reinforced by society, which tells women that their bodies should be clean and tidy, and if they aren’t, well that’s not something to be openly and honestly discussed. By anyone.”
“Oh man I get PTSD from just thinking about it!” recounts Anna Okum, a 16-year-old from Cincinnati, Ohio. “So basically, after getting the whole period chat from my momma, she basically said she was a late bloomer, so I had nothing to worry about for a while, since every woman in my family had gotten their period crazy late.”

Comfortable with her mother’s “talk,” Okum was not prepared at 12 years old for the common premenstrual symptoms – cramps, mood swings, nausea, etc. – that began much earlier than her mother predicted.

“So, I’m at school and a whole week goes by where I went from crying one second, to screaming the next, to wanting attention, going back to crying, the period usual,” joked Okum. “So, I was in English class and I was like, ‘Man, I’m not feeling too good!’ So, I go to the bathroom and my friend Abby was in there crying because she just got her period and had NO idea what to do. As I was trying to comfort her, I look down, and lo and behold, I got mine too. So, now we were both missing class, had no idea what a tampon was, and couldn’t think of anything to do. So instead of being proactive and asking someone, we both lay down on the bathroom floor and cried about it! Mind you, we were both out of class and our teachers had no idea where we were. So, there was a search party of teachers around the school looking for both me and Abby. A solid 20 minutes later the janitor knocks on the door and sees us on the floor crying with our clothes stained, so… our school janitor called over a teacher who taught us how to deal with periods, and may I say I was too embarrassed to talk to that teacher ever again!”

Alex Coburn, a senior at Ithaca College, shared a different type of period horror story. “…Not because of a stain, but because it smelled like period blood… you know that fun little feature of menstruation where period blood smells super strong?” 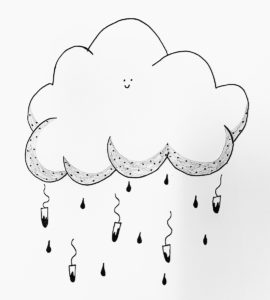 Blood doesn’t normally have a scent when we cut ourselves or get our finger pricked, so the fact that period blood smells can be shocking to people. The truth is, it is completely normal. Menstruation smells because blood mixes with vaginal bacteria, resulting in an odor. Christine Greves, MD, an ob-gyn at the Center for Obstetrics and Gynecology at Orlando Health in Florida, told Health earlier this year that vaginas are, “home to many different bacteria, and when that bacteria mixes with blood, it produces an odor. Simple as that.”

“It got so bad that my teacher noticed and made us all clean out our lockers, legitimately thinking that something had died, or someone had let food rot in one of them,” Coburn continued. “I stayed so silent and periodically ran to the sink to spread hand sanitizer all over my skirt hoping it would disguise the smell. Thankfully for me, my teacher found food in a boy’s locker. I felt bad because he was already ostracized by most of our classmates for being a little odd, and this only served to exacerbate that. But of course, the thought of speaking up about my period was absolutely horrifying, so I allowed it to happen.”

Toni Brannagan, an author at THINX, offers some tips to combat the stigma associated with that time of the month. “Be conscious of your subconscious behavior. You may think you aren’t embarrassed, but notice next time you do something such as hiding a tampon in your sleeve on the way to the bathroom or feel uncomfortable asking a stranger for a hygiene product. Don’t act like it is something to hide.” Acknowledge the bloody monster in the room and you will take away its power.

Lucy Calderon is a first-year Journalism major who got their period in a Papa John’s bathroom. You can reach them at [email protected].