Journalism in the Wake of Scandal

Are we doing enough to fulfill our duties as the fourth estate? 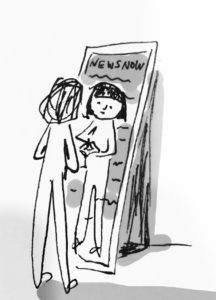 Albert Einstein is quoted as saying, “No problem can be solved from the same level of consciousness that created it.” This surmises a paradox of the U.S media which is not new, but has been highlighted over the past year: How can journalists ethically cover issues which affect their own field?

Idealistically, journalism’s role in society is to catalyze social justice. We consider the noblest reporting to be that which checks the government’s power, exposes oppression and serves the oppressed. But how can this reliably be done when the field of journalism itself is plagued by the same injustices it sets out to expose, and how can the powerful be held accountable when most media is owned by those in power?

To put this question in a current context, consider the most publicized series of injustices in the past few months: sexual harassment. The majority of abusers and predators to be exposed by this movement have been prominent members of either the entertainment industry or the government–two arenas uncomfortably close to the news. Due to this close proximity, a major impetus for the movement almost didn’t happen.

Freelance journalist Ronan Farrow was months-deep into an investigative expose on the sordid career of Harvey Weinstein when NBC, which Farrow had written the story for, began stalling and attempting to “kill” the story. NBC claims the story wasn’t ready for publishing. Farrow, who eventually published the bombshell article in The New Yorker, maintains that his story was solid, implying that NBC refused to run it for other reasons.

The effect of the movement is not only peripheral, however. Revelations about sexually inappropriate and abusive behavior have recently brought down several high-profile American journalists. Bill O’Reilly of Fox News, Matt Lauer of NBC News and Charlie Rose of PBS are some of the most noteworthy examples.

This string of firings perhaps gives the appearance that the mainstream media is cleaning house and starting fresh, but I’m doubting it. For instance, as of 2016, ESPN’s Mike Tirico was hired by NBC to provide play-by-play coverage of the NFL season. As reported by The Intercept, this came despite Tirico’s notorious career at ESPN, during which he was accused in 50 cases of sexual harassment by several female co-workers. His alleged behavior, for which he was given a three-month suspension, includes making inappropriate comments toward, groping and stalking the women he worked with. This year, Tirico will replace Bob Costas and host the 2018 Olympics for NBC.

I think that this problem can not be chalked up to the “few bad apples” explanation. I argue that there are flaws in the very structure of mainstream media which make it susceptible to injustice, corruption and bias toward the status quo.

One structural component of journalism which is perhaps at the root of many inadequacies is consolidation. Media consolidation has been very well documented for a long time, but never properly addressed. Basically this idea all comes down to ownership. As of 2012, Business Insider reports that six corporations own 90 percent of all U.S. media. This means that almost every song, movie, T.V. show or news story you ever consume is likely brought to you by one of six multinational corporations. It also means that each media executive has a personal audience, who have a disturbingly high propensity to be manipulated, roughly the population size of San Francisco.

Studies in agenda-setting theory have produced conclusive evidence that the information we receive from the news media has tremendous effects on public opinion and therefore societal behavior; such powerful information being owned by such a small portion of the elite should be alarming.

Perhaps the best known critique of media consolidation comes from Edward S. Herman and Noam Chomsky in their book, Manufacturing Consent. In it, they draw attention to the rapid concentration of media ownership and theorize what they call “the propaganda model.” The propaganda model consists of five filters through which information must pass before it is fit to print: ownership, advertising, sourcing, flak and anti-communism.

These five filters refer to the way free press is affected by media consolidation; the “necessity” of advertising in order to make a profit, the infallibility-status given to government and corporate sources, the use of flak— or backlash— as a means of disciplining journalists who dissent too radically and the ideology of anti-communism (communism referring to whatever the current bogeyman is).

Under the current system, mainstream journalism cannot be expected to resist, critique or expose the injustices upon which it is built. Before it can be reliable enough to provide in-depth coverage of injustices, it must address its own unequal, corporate and sexist structures. Before it can be trusted to check the powerful, it must become a press run for and by the people, instead of six wealthy CEOs. And before it can truly be regarded as a free press, it must become brave enough to publish real dissent, not just the marginalized dissent permitted by advertisers.

Owen Walsh is a third-year journalism major. He writes Amy Goodman fan letters every week. You can reach them at [email protected].