Living In Their Own Little World 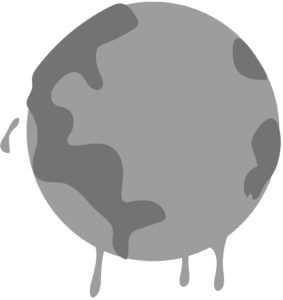 Midway through November, the island nation of Fiji held the 23rd annual United Nations climate change conference, where delegates gathered to discuss their country’s role in warming the planet, and promised action to mitigate their carbon footprint. The United States — which pulled out of the landmark Paris Agreement earlier this year — championed three forms of energy at this carbon-mitigation conference: coal, oil and nuclear.

The United States has been notoriously unwilling to firmly commit to green energies, despite being one of the worst emitters of carbon. And this continued reliance on fossil fuels has been carefully preserved by outdated skepticism or outright denial of climate change.
In the U.S. the arguments against “believing in” climate change have become trite and predictable. Deniers make the baseless claims that the evidence is just not there, that the climate has nothing to do with human activity, or that perhaps the scientists are right but the effects are not significant enough to worry about.

In addition, there is another element of the climate conversation that has become extremely predictable in the U.S. Whether on the Senate floor or at a local bar, the believer is probably a Democrat and the denier is probably a Republican. According to the Pew Research Center, 70 percent of liberal Democrats trust what climate scientists say compared to just 15 percent of conservative Republicans. Even though it is a matter of scientific consensus, climate change has become an issue as polarized and partisan as gay rights, gun control, health care and tax codes.

Many people, including several interviewed for this article, point to high profile Democrats (most notably Al Gore) who, by making climate change a platform of the Democratic party, have discouraged Republicans from accepting what climate scientists report.

But there are even deeper factors to consider as well. The skepticism and politicization of climate change are not natural events or accidents. Both have been carefully manufactured by powerful interests through the exploitation of fundamental human tendencies and behaviors.

David Kay, a developmental sociologist at Cornell University, explains that climate change is a unique issue in that the more people learn about it, the less likely they are to come to a consensus.

“The more people are educated and competent at handling textual, mathematical, and statistical data, the more they disagree about the facts [of climate change],” Kay says.

There are a number of explanations for this paradox that are still being disputed in academia. Thus far, Kay has been most convinced by the argument that when people answer questions about whether or not they believe in climate change, they are not responding from a place of knowledge, but a place of deeply ingrained identity. In other words, climate change-deniers are not really taking on the lofty task of disputing the research done by hundreds of climate scientists around the world; they are instead refusing to admit to a flaw in their fundamental worldview.

The desire to reject information that challenges long-held beliefs about the world is an element of human behavior that runs much deeper than liberalism or conservatism. In fact, researchers of cultural cognition have generally found this tendency to be alive in all of us.
“One thing that’s very clear is that we all pick and choose information that supports our preexisting beliefs,” says Kay.

The process of picking and choosing information which supports our worldview, and rejecting information that challenges it, is defined by Kay as “motivated reasoning.”
When people are motivated by something as palpable and potent as identity — in this case the identity of conservatism, which includes minimal regulation on corporations, private over government interests and the preservation of capitalistic structures, all of which are threatened by environmental regulation — no amount of irrefutable scientific data will be enough for them to reassess their own sense of self and their own perception of the world; indeed it may only reinforce these things.

Those who benefit from denialism are wise to the cultural phenomenon of people wanting to believe what fits into their perception of the world and wanting to discount what doesn’t. To this end, there is a group of “scientists” who have made it their business to produce misinformation with the intent of confirming the public’s pre-existing biases against accepting the findings of climate studies.

In a book titled Merchants of Doubt, Naomi Oreskes and Erik M. Conway tell the tale of a small, insidious group of scientists who have developed a successful strategy for sowing doubt among the public about topics that the scientific community has long had consensus on.

Oreskes and Conway identify men like Fred Seitz, Robert Jastrow and Bill Nierenberg — who first developed their strategy for manufactured skepticism in the 1970s when they disputed the indisputable research linking cigarettes to cancer — as significant players in the anti-science movement against climate change.
“They were all senior American scientists with strong connections to the Reagan administration… so government officials were willing to listen to them,” Conway says.

Sponsored by right-wing think tanks and corporate institutions interested in preventing the free-market restrictions environmentally-friendly policies require, these scientists and their peers have applied the “Tobacco Strategy” to legitimate climate change research.

These think tanks have been largely successful, most likely due to the phenomenon of motivated reasoning: one scientist disagreeing with the consensus of almost every other climate scientist can be enough to confirm the beliefs of conservatives who have everything to lose.

As Conway explains it, “We have networks of think tanks that exist to generate disinformation, a media establishment that happily publishes it — mostly for free — and a public that laps it up.”

The Tobacco Strategy could not work without the complicity of the “media establishment,” identified by Conway. Mainstream news sources have played a pivotal role in shaping attitudes toward climate change, often fostering skepticism or apathy. According to Media Matters for America, between 2014 and 2015, Fox News was the only legacy broadcaster to significantly increase climate change coverage, and the majority of that coverage focused on denialism or criticism of climate policy. CBS and ABC both covered the issue less in 2015 than in the previous year.

Furthermore, the fourth estate essentially provided the candidates a free pass on climate change in the most recent presidential election, bringing the topic up zero times in any of the three general election debates.

And when the climate is covered, the media has often over-represented the arguments of deniers, suggesting that there are equally valid points to be had on both sides, ignoring the lack of evidence, lack of credibility, and abundant conflict of interest on the side of the deniers.

“The American media practices a form of bias in its demand for ‘balanced’ coverage of major issues, insisting on ‘both sides’ being taken equally seriously regardless of merit,” Conway says.

In response to the polarization of the issue and the invention of doubt about climate change, politicians and activists have been attempting to find ways to make lower carbon-emissions attractive across party-lines. One such group is the Citizens Climate Lobby (CCL), which campaigns for a fee on fossil fuels that would increase the cost of carbon emitting energies and therefore incentivize the necessary shift to renewables without directly threatening the fundamental ideologies of conservatism, like small government and minimal regulations.

Nancy Jacobson, a professor of biology at Ithaca College and member of the CCL, believes a market-based solution can bridge the political gap currently inhibiting carbon reduction.

“The idea is that this would make fossil fuels more expensive and incentivize investors, innovators, utilities and consumers to help in making the move to energy sources other than fossil fuels … Since this is a market-based solution that would not grow government, it can be attractive to conservatives,” Jacobson says.

The CCL’s carbon-fee represents an example of climate scientists, activists and politicians attempting to find common ground with deniers whose conservative or capitalist identity is preventing them from accepting the science. These solutions are purposefully non-confrontational to the conservative ideology in order to achieve more widespread support.

This solution has scientific data backing it up. Dan Kahan, a leading researcher on cultural cognition, details his findings on this topic in Handbook of Risk Theory.

“Don’t simply bombard people with information if you are trying to make them more receptive to risks,” he wrote. “Doing that can actually provoke a cultural-identity-protective backlash … Information can help, but it has to be framed in a way that affirms rather than threatens the cultural identities of potential risk skeptics.”

However, there are others on the left who feel that the conservative worldview must be challenged, and that current economic paradigms as we know them today, especially those favored by the political right, cannot coexist with the type of drastic shifts fighting climate change requires.

The best-known voice of this argument is Naomi Klein, author of This Changes Everything: Capitalism vs. Climate. While Klein does in fact support a carbon tax like the CCL, she argues against creating a solely market-based approach to emissions-curbing, saying that the drastic threat of climate change calls for deeper societal reforms than those that can be easily stomached by Republicans.

“The first problem with this strategy [of appealing to Republicans] is that it doesn’t work … The far more troubling problem with this approach is that rather than challenge the warped values fueling both denialism and disaster capitalism, it actively reinforces those values,” Klein writes in This Changes Everything.

Unfortunately for planet Earth (and fortunately for corporations that stand to lose capital from carbon reduction policy) climate change is an exceedingly complex issue both scientifically and socially. No solution exists to the problem that does not also address some preexisting and hegemonic aspect of most people’s daily lives.

Only making matters more complex, those who deny that the planet is getting hotter are not the only ones hindering the green movement.

Kay observes that even people who accept the science of climate change practice their own form of denialism. While many people are not denying the information they receive from scientists, they ignore the implications of that information and continue to live life as if everything is normal.

“Imagine somebody from another planet comes to me and says, ‘I have irrefutable proof that within your children’s lifetime, the world is likely to be uninhabitable’…Well I’ve heard that message and I’m just living my life like I normally do. So isn’t that a form of denial?” Kay asks.
The denial of climate change, whether of the validity of the science or of the risk it poses, is widespread. The enormity of its implications are precisely what restricts people from acting. Too many everyday truisms, like taking a gas-powered car from point A to point B, and too many reified worldviews, like capitalism and consumerism, are challenged for people to accept the implications and take action.

The paradox this presents is finding a solution that is both radical enough to reverse the crisis of climate change and digestible enough to be accepted by the public. So long as corporate interests continue to produce undue doubt and hold back progress in order to protect their own interests, human existence on earth remains in jeopardy.

Owen Walsh is a third-year journalism major who is in denial that exams are around the corner. You can email them at owalsh@ithaca.edu.