The intersection of attractiveness and influence

In Western society, beauty is a currency unlike any other. Often more powerful than money, people who are considered conventionally good looking are more likely to get a job, find a partner and earn a better living solely based on how they look. While we like to believe the age old phrase “beauty is in the eye of the beholder,” the 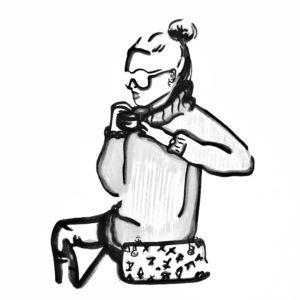 notions of what is considered “beautiful” and what is not are typically dictated by culture and unfortunately the mainstream media as well. Celebrities, moguls and some of the most successful business people often fit the cultural definition of “attractive.” Our advertisements, billboards, music videos and movies are all dominated by this idea of beauty and the secret power that comes with it.

According to a 2016 Maclean’s article by Charlie Gillis, researchers found that one of the biggest reasons “beautiful” people hold power over our society is that we see them as greater people just based off of their looks. “Basically, we persuade ourselves of their greatness, projecting virtues onto the beautiful without the slightest knowledge of whether they possess them,” said Gillis. “Study after study has since shown we assume them to be smarter, kinder, more generous and more trustworthy than their less comely counterparts — even when we have nothing more to go on than pictures of their faces. This tendency, referred to as the “what’s beautiful is good” stereotype, affects men and women; adults and children; people of every race, religion and ethnicity,” he noted. “It applies whether the target of our gaze is a potential mate or a prospective head of government.” Unsurprisingly, Many psychologists agree. This issue in our society stems from the belief that if someone is attractive on the outside, they must be on the inside too. While we know that often this is not the case, genetically we are predisposed to feeling this way.

Maja Wood, a private practice psychologist whose work addresses issues of how physical appearance influences psychological development, said these experiences often reach the workplace. While two individuals could have the same resume, one’s attractiveness often helps them get the job over their competitor. This could be attributed to the psychological phenomenon known as the “halo effect.”
“This is a type of cognitive bias in which your feelings and perceptions of one characteristic in a person carries over,” said Wood. “If a person is seen as beautiful, then that person is also perceived to have many other positive qualities as well, such as being intelligent, motivated and successful. So, of course, that can help with a career.”

When assessing how “beautiful” people are potentially getting further ahead in various aspects of life, it is important to note just what these characteristics are that our society finds to be so appealing in the first place. Changing from decade to decade, the most common norm in what Americans consider to be “beautiful,” is unfortunate but not surprising: being white.

According to Margaret L. Hunter, author of Colorstruck: Skin Color Stratification in the Lives of African American Women, “The detrimental effect of these European beauty standards on black women is a societal issue that is often unaddressed on a multisystem level. Black women today are subjected to incessant messages about European ideals of beauty through family, peers, partners, the media, and larger society. If young black women stand in contrast to what society dictates as attractive, they may find it difficult to grow to accept themselves. ”

Michelle Hebl, Professor of Psychology at Rice University, says this is not exclusive to American society, but that almost every culture has strong norms concerning their community’s beauty. Some are cross-cultural, such as clear skin and good face structure, whereas others, like weight, hair and body shape, are not. Hebl says that, “In our society, lighter skin, mature cheekbones coupled with baby-faced features, wrinkle-free skin, and thinness are all portrayed as user-desirable features in women. Men also face inordinate pressures to look a certain way but these standards often involve appearing a certain height and having strong muscular features, also traits that are sometimes very difficult to attain.”

With these societal limits in place, it is almost no surprise who is considered attractive and who isn’t, and it is no surprise there is a small number of people that can actually fit this mold. What is eerily disturbing about this country’s beauty standards is the blatant power, oftentimes social and economic power, we give to people who achieve these standards.

Statistically, researchers have found that being good looking pays. According to Daniel Hamermesh, Professor of Economics at University of Texas at Austin, there is an immense amount of evidence showing that almost all countries, including Germany, Australia, the UK and of course the United States, all discriminate based on looks. But just how significant is this economic disparity?
Hamermesh says, “The typical comparisons are between folks in the top one-third of looks, the next one-half, and the bottom one-sixth. The effects appear larger in the United States, but in general the penalty for bad looks appears larger for men (than for women). Among men in the United States the top one-third make about five percent more than the average group, while the bottom one-sixth make about ten percent less.” Hamermesh also notes the direct correlation. “These differences account for a large number of other factors that cause people’s earnings to differ.”

These statistics prove the ugly truth about how our society and our companies view their employees. Hamermesh notes that there are reasons companies benefit from hiring good looking individuals, which could contribute to why they do it. “Customers prefer dealing with good looking people. Other workers get pleasure out of working with them. And the boss enjoys being with them also.” The way in which employers and even employees may “enjoy” being around good looking individuals brings this argument full circle, back to the “halo effect” that often occurs when someone who is considered beautiful is around others who are seen as merely average. Bosses may see someone who is good looking on the outside and assume the inside matches as well. Because others inherently want to be near beautiful people, the cycle continues over and over again. According to Hamermesh, some places, including Washington D.C. and California actually consider it workplace discrimination to pay people or promote them solely based on their looks. However, that is not the norm across all fifty states.

Unfortunately for our country, there seems to be almost no solution for the way in which we perceive and treat people society deems “beautiful.” Hamermesh put it bluntly: “There is no incentive for employers to alter their behavior. Without government intervention or affirmative action for the ugly, nothing will change anytime soon.”

What we need to do as a society is look inward and ask ourselves just why we turn attractiveness into a hierarchy of unattainable standards that only a small percent benefit from. Seeing things in yourself that aren’t conventionally beautiful, perhaps cellulite, acne or scars and embracing them to your fullest potential is the best way to combat our culture’s inherent desire to give good looking individuals more power and status. Changing the dialogue about what is and isn’t considered “attractive” is the first step to embracing everyone’s unique beauty, both inside and out. The more we press our media and even ourselves, the more we ask, “why am I lifting that person up and putting myself down?” and the more we love and accept everyone as being beautiful in their own way the more we actually achieve true power. There is beauty in being good to ourselves.

Morgan Kornfeind is a third-year journalism major who wants you to know who’s the fairest of them all. You can reach them at mkornfeind@ithaca.edu.