The Horrors of Holocaust Denial

The words “conspiracy theory” are bound to evoke fairly strong images in the minds of those who hear them. Commonly, when one thinks of such ideas, they think about aliens, the Illuminati, or the moon landing. These theories are, more often than not, laughed off as jokes; it’s unlikely that there is truly an underground society of celebrities, such as Beyoncé, who are all conspiring to take over the world, but it’s still entertaining to discuss.

However, some of these theories can cause extreme harm, on both a societal and personal level. One such theory is Holocaust denial. This dangerous conspiracy theory is returning to the mainstream and creating a harmful climate in which such commentary is acceptable for some and hurtful to many.

Following Donald Trump’s Holocaust Remembrance Day statement early in his presidency, in which he did not mention Jewish people, as well as Sean Spicer’s claims that Hitler did not use chemical weapons during the Holocaust, it is rapidly becoming clear that anti-semitism, in all of its forms, is steadily working its way once again into mainstream politics and media. A study by the Anti-Defamation League reported that in the first three months of 2017, anti-semitic incidents rose 67 percent in the United States, in comparison to the same time frame of the previous year.

In line with this is a rise in Holocaust denial, or a conspiracy theory in which non-believers state that the Holocaust itself never happened, that gas chambers were never used by Nazis, or that the number of people killed was closer to 500,000 than the true estimate of approximately five to six million people, a whole order of magnitude higher. In a recent interview 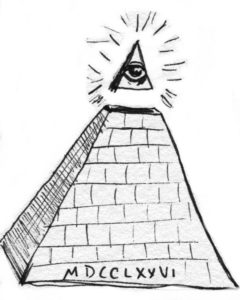 with The Guardian, historical lecturer Dr. Nicholas Terry says that there are “thousands of ‘low commitment’ Holocaust deniers online.”

In online forums such as Reddit, 4chan and other various websites, many users write posts centered on denial, often full of anti-semitic slurs and imagery. One user writes, “THE HOLOCAUST HAS BEEN USED FOR SOCIAL ENGINEERING FOR OVER 50 YEARS. DO NOT LET SOME PATHETIC RELIGIOUS CULT MANIPULATE YOU INTO SUBMISSION [sic].” Another user comments on a video of an interview done with a Holocaust survivor, saying, “So it’s quite possible to create an eyewitness out of nothing if you pay enough shekels [sic].” Such comments are altogether too common and indicative of the more nonchalant anti-semitic conspiracy theories that have seen an increase in followers in recent years.

Although both Holocaust denial and anti-semitic commentary have run rampant since the end of World War II itself, there seems to be an increase in recent years that represents a resurgence. A 2010 Harvard University survey stated that, in 2009, 1,256 news, opinion and feature articles contained the subject of Holocaust denial, as opposed to 287 in 1999. Additionally, a survey by the Anti-Defamation League showed that, of the people surveyed who had heard of the Holocaust, 32% believed that “it is a myth or has been greatly exaggerated.” These statistics are just a small sample of this larger issue, which largely impacts many people on an intimate level.

Sophia Zinger, a freshman at Millikin University in Decatur, Illinois, is personally impacted by Holocaust denial. “My grandmother and my late grandfather are both Holocaust survivors,” she said. “They both grew up in Austria and were there when the Nazis invaded. My grandfather fled the country with his infant nephew and, when the Nazis came to my then-sixteen-year-old grandmother’s door asking for her father, she convinced them to come back later and her family fled that day. The majority of my family members were not so lucky.” Zinger has grown up watching the impact that the Holocaust has had on her family, as has student Elena Ganz. Both have practiced Judaism for their whole lives, and have seen the loss of life and family through their relatives.

Said Elena Ganz, “I was born and raised Jewish, and as soon as I learned about the Holocaust, I learned about the family members I had that lived through it…Hearing the horrific stories of tragedy that impacted my family tree will never leave my mind.” The Holocaust is a tragedy on its own, one which has impacted Jewish people generation after generation, and will continue to do so for hundreds of years. Holocaust denial is an awful addition to an already horrible history, one that is treated so casually in conversation, almost in a joking manner. Ganz tells a particularly haunting story about her own experiences with anti-semitism and how it evolves into denial.

“When I was in middle school, Holocaust jokes got thrown around a lot. The usual Hitler and Nazi jokes didn’t bother me because I was used to getting them,” she explains, “But one day, someone made an oven joke, something about Jews being related to pizza because an oven is like a gas chamber.” Ganz describes the way that these jokes reminded her of her great aunt Dorothy, who survived in a factory work camp as a young girl, and eventually shut herself in for the rest of her life. For individuals with ancestral ties to the Holocaust, the gruesome means by which Jewish people were executed are nothing to joke about.

It’s truly impossible to measure the impact of Holocaust denial. While jokes are common, they are no less dangerous than outright denial, as they make light of what Ted Loewenthal, a Jewish student of the University of Illinois describes as “a blatant attempt to rewrite the narrative of extreme prejudice that Jews have faced.”

This denial creates a climate of fear, one that is difficult to escape. Despite irrefutable eye-witness testimonies, physical evidence and historical facts that clearly show the horrors of the concentration camps that Ganz describes, Holocaust denial continues, harming and frustrating those who are left to cope with its side effects.

“It happened in Germany. It happened in Poland. It wasn’t a freak accident. It was the direct result of centuries of racism,” Loewenthal says, a stark reminder of the cause of both the Holocaust and its blatant denial. Similarly, Zinger attributes the denial to “people’s desire to maintain their privilege.” She states, “Our country is on a current, insidious trend of denying the truth. [It] is, in many ways, built on and sustained by lies, and I think Holocaust denial is a way to strengthen that illogical foundation… if this continues, an outright accepted falsehood is going to be normalized and we are going to suffer for it greatly.”

So how can one combat the horrors of Holocaust denial? Despite all of the facts, it seems to be growing around the world, at least in the realm of internet subcultures, even with the many laws against it. It seems difficult to fight, which is the excuse that many give against anti-semitism. Loewenthal says that the best way to attack the issue is by making it immediately clear that such behavior isn’t okay.

“What happens sometimes is that a couple of people start going ‘Hey, maybe killing Jews is okay,’ and most people ignore them, but a couple of people pay attention, because it validates their internal prejudices,” Loewenthal said. “So you have to make it clear as soon as it pops up that it’s not okay.”

On a personal level, stepping in is the most important aspect of fighting Holocaust denial. However, when it comes to the deniers themselves, Zinger makes her own points.

“I would implore these people to analyze why they feel the need to deny something that’s so blatantly irrefutable, to find some empathy and to educate themselves,” she said. And that’s truly the lesson here; educating, advocating, and involving yourself when you observe Holocaust denial is the first step against a conspiracy theory that might otherwise be treated as a joke. Even the smallest action can be enough to spread the harmful ideologies of Holocaust denial, and cause problems for years to come.

Audra Joiner is a first year exploratory major who doesn’t give a fuck about your ignorant Reddit thread. You can reach them at ajoiner@ithaca.edu.