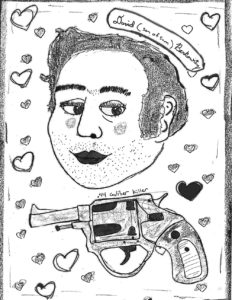 In an era where media violence is the subject of much debate and conjecture, it’s hard to imagine that a film like John Waters’ Serial Mom would ever be made. The dark comedy, which features Kathleen Turner as a mother who commits multiple murders at the slightest faux pas, is a cult favorite.

Released in 1994, it sets mass-media murderers in a satirical light, and it points a finger at a killer based on her infatuation with True Crime novels. Today, we might not make this same connection between a devout interest in true crime and actually perpetrating one; criminology culture is growing.

With blogs, TV shows and novels amassing a large fandom focused on the study of criminals, as well as the sales of “murderabilia,” or objects belonging to famous killers, it’s somewhat common to explore this community of killing.

For others, however, it’s hard to imagine that there is a place dedicated to dissecting the Columbine killers’ journals or bidding on John Wayne Gacy’s clown art, let alone to imagine the reasons why. And yet, some of the same people who question it are those who love horror classics, Criminal Minds and Agatha Christie novels.

So why do people love killers, whether they’re real or fictional? The answer may lie in the depths of the popular blogging platform Tumblr, one of the most prominent places where one can find a cult following amassed by murderers, serial killers or school shooters. This corner of the internet calls itself the True Crime Community; it features many blogs, often run by teenagers and twenty-somethings, that center around the nuanced details of murders and shootings.

Many of these bloggers have their own opinions surrounding why they are so fascinated by true crime; one blogger by the username “truecrume” says that they found their interest in this subculture after hearing people ask, in the wake of a tragedy, “how could this happen?” Some bloggers find themselves looking for answers. They post memorials for the victims on their birthdays, share quotes from families looking for closure, and write condemnations of the killer’s behavior.

In some bios, however, a single word sets the tone for the content of the blog: condone. According to another user, who goes by the username “ericstrenchcoat,” (a reference to the infamous trench coat worn by Eric Harris, one of the Columbine shooters) certain members of the community “[condone] the actions of the perpetrator.” While others, according to ericstrenchcoat, “realize that this can be a sensitive subject to some” and, as a result, they “try to be respectful to the victims/their loved ones/everyone involved [sic].” These members of the community refuse to condemn the killers that they idolize.

Surprisingly, many members of the community fall into the category of “condoning” such violent acts. Although a more uncommon phenomena in the True Crime Community, there is subsection of people “who openly condone and disrespect the victims, people who say they’re ‘saving themselves’ for a dead serial killer,” according to ericstrenchcoat.

The modern equivalent of those who would write love letters to imprisoned murderers, these bloggers seem to lack the educational perspective that many members feel is so integral to the group. Many of these bloggers have a very select form of content on their blogs: fanart and fanfiction. They can range in nature from cutesy drawings of the Columbine shooters in flower crowns to pornographic images involving themselves and Ted Bundy.

This subsection of the True Crime Community is a fandom in its own right; people gush over photos of the shooters, dissect their writings and debate over whether or not the killers were truly problematic by their definition. Dr. Scott Bonn, acclaimed criminologist and author of Why We Love Serial Killers, claims that this infatuation is not all that surprising. “It’s not uncommon for these murderers in prison to receive fan mail and love letters from [people] who are obsessed with them,” Bonn said, “I think there’s a little bit of the bad boy phenomenon going on. Some of these serial killers have groupies, and I’ve talked to them. Their claims seem to be that ‘he may be a bad boy, but I’m the only one who understands him. I can fix him.’” Oftentimes, these bloggers are the ones sending such letters, containing their art or their stories. Even more shocking than the content, however, are the creators: after examining the TCC, it’s clear that most of the members of the True Crime Community are teenage girls.

Many people are more shocked by the demographics of the community than they are by the actual content. However, Tumblr user “babyklebold,” again named for one of the Columbine shooters, Dylan Klebold, offers one simple explanation for why so many young girls are involved: aesthetics. “The majority tend to be drawn to the looks of the person,” they said, “and it’s just a teenage girl’s typical reaction to a guy they find cute.”

It’s easy to make this connection, as the killers that young girls tend to focus on are often considered to be aesthetically pleasing, at least by Western standards of beauty. But Bonn says it’s part of a larger phenomenon. He notes that murder is often an intra-racial crime, or a crime that is mainly committed within the same race.

“There seems to be a pattern to the types of stories that receive the most attention,” Bonn said, referring to major media portrayals of murder, “and oftentimes the victim is a very attractive, young white woman.”

It’s a common phenomenon with dangerous results. When one creates a sexualized and racially homogenous picture of murderers, not only are they creating a dangerously glamorous vision for future killers, but they’re ignoring the impact it has on both survivors and victims.

“The stereotype that all serial killers are young white males is simply not true, and it does an injustice to the minority victims of serial killers,” Bonn said. “If we don’t pay attention to when young African American women are getting killed, it very much does an injustice to those victims and their families, and yet, this is the case.” Bonn believes that, due to the stereotype that most serial killers are white men, and the fact that murder is an intra-racial crime, not enough attention is put on minority victims and their families.

Bonn notes that, in many of the shows he consults on, there’s a drive toward emphasizing attractive, white male killers, simply because media loves to focus on upper-class, white women. In part, this creates a cycle; young white women find themselves attracted towards young, white male murderers, who in turn murder young white women, and create more fascination.

“It’s interesting, the audience of the True Crime genre of books and movies does skew female. To a certain extent, it’s the closure in those TV shows; people like to be frightened, and while women are certainly not alone in that, it’s the closure that shows that the bad guy is always caught, and it makes them feel safe,” he said.

It’s the paradox of horror. Although people want a healthy environment to experience fear, they don’t actually want to be in danger. This creates a demand for horror related media, especially in the realm of the True Crime Community. As Bonn points out, “One of the lures… is that idea of being frightened, with a heightened adrenaline, and yet, at the end of it, feeling very safe and secure.”

This theory is immediately evident in modern media, especially on television. Millions of teenage girls gush over American Horror Story’s Tate Langdon, a school shooter and serial rapist who captures the heart of a young girl named Violet. Langdon, played by Evan Peters, is brutally romanticized. His portrayal is fraught with soft moments that, while often interpreted by fans as a nuanced and complicated character, truly lend themselves toward an unhealthy expectation for young fans, one that frames emotionally abusive and often violent tendencies as romantic.

Tate is well-loved, and photos of him are common on the same Tumblr blogs that also feature killers such as John Wayne Gacy, Adam Lanza and Charles Manson. Many people consider Tate to be forgivable even though he commits rape and murder. And, although he’s an easy example of an on-screen killer who is beloved offscreen, he’s far from the only one.

Such roles are common — in fact, they seem to dominate both large and small screens of every single era. A pattern emerges, where we see the murderer rapidly becoming the romantic partner, as in Scream, or more recently, Get Out.

Filmmakers even make a pass at real killers; the soon-to-be-released indie film My Friend Dahmer focuses on the humanization of Jeffrey Dahmer by considering his personal struggles, as well as the series of events that led up to his rape and murder of sixteen young men.

In addition to the Western ideal of beauty that is often associated with the popularity of certain killers, Bonn believes that there is another force at work. “I think there’s a little bit of the bad boy phenomenon going on — some of these serial killers have groupies, and I’ve talked to them,” he said. “Their claims seem to be that ‘he may be a bad boy, but I’m the only one who understands him, and I can fix him.’”

It’s a well-loved trope in modern media; everyone from the aforementioned Tate Langdon to Christian Grey of Fifty Shades of Grey seem to fall into the archetype of the “bad boy” who is only good to his girl. And it’s just as dangerous; it creates an unhealthy belief that the bad boy relationship is the ideal.

The younger teenage girls who feel this level of involvement seem to get sucked into the belief that they can fix a man who can and will hurt them. As a result they feel attracted to an abusive relationship. It’s readily promoted by the media, as well; while Bonn says that while he urges media to “depict reality and not promote stereotypes,” oftentimes, it’s impossible to wholly escape the reasons that people love these killers.

It’s easy to claim that people who participate in serial killer culture love murderers because they idolize them, and because they, too, would like to commit murder. But that’s not reality. It’s easy to imagine that this fascination is outside of the mainstream, but murder culture isn’t just limited to true crime killers, it’s in mass media, too.

The truth is that people love killers because they know why they’re afraid of them, but they are so distant that there is a certain safety from them. Once a person knows a killer, whether they’re real or fictional, they’re behind bars. They can be poked and prodded, explored and warped into an urban legend. Their fans can choose to believe, at that point, that they can be changed. They can choose to ignore that the person they’re idolizing is a murderer, or a racist, or a rapist, and instead focus on them as the victim. They explore the unknown through the facts that they do know, and it’s this touching of the void that enables the controlled kind of fear humans crave.

Audra Joiner is a first year exploratory major that killed this article. You can email them at ajoiner@ithaca.edu.