This was supposed to be my first album review. I was going to write 500 words praising the emotional depth and versatility of XXXTentacion’s album 17. Then I saw the news.

In 2016, XXXTentacion was charged with aggravated battery of a pregnant woman, false imprisonment, domestic battery by strangulation and witness-tampering. The alleged victim’s 142-page testimony details graphic patterns of both psychological and physical abuse over the course of their relationship. I was horrified, but I wasn’t surprised. And after a while, I became horrified that I wasn’t surprised.

After his single, “Look at Me,” dominated SoundCloud and later Spotify, popular hip-hop magazine XXL added him to their 2017 XXL Freshman Class, a group of up-and-coming rappers they feel will dominate the sound for the next few years. (Past Freshmen include Chance the Rapper, Lil Yachty, Lil Uzi Vert, 21 Savage and more of today’s greats). Being an XXL Freshman doesn’t necessarily mean you’ll be widely accepted as the “New Wave” but it’s still an honor and a huge boost for that artist’s exposure. Each new Freshmen gets a moment to shine in the highly anticipated annual XXL Freshman Cypher, where artists have a chance to express themselves, both individually and as a group. If the XXL Freshman Class list determines the honor roll for hip-hop, the cyphers determine class ranking and XXXTentacion was arguably the top of his class.

I’d only recently become a fan of XXXTentacion (about a month after “Look at Me” was released), and watching him develop from, “that rapper with that one song,” to arguably the most talented Freshman in the XXL 2017 class gave me hope for the future of hip-hop. I searched his backlog of music that includes artists like Ski Mask the Slump God and found a new subgenre of hip-hop that might not even be hip-hop anymore. It sounded metal as hell. It was loud and scary but exciting and tapped into societal and racial issues with both depth and the “F**k Off” mentality that teenagers are stereotypically known for. They’re young and angsty and they have something to say. The anger in his voice perfectly matched his iconic blown-out-bass focused production. Over time, I interpreted his whole sound as “Black Teen Angst Incarnate.” Punk rock for black kids. I was sold. 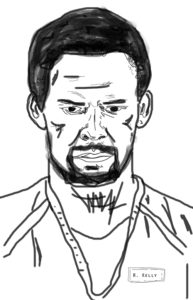 17 showed me more than his anger. Now-hit “Jocelyn Flores” is a heartbreakingly slow jam dedicated to his friend who committed suicide. The album discusses themes of family, friendship, mortality and a lot more than what I thought X was capable of as an artist.

Now that the news of his alleged abusive past has spread, the question becomes whether or not he’ll face consequences within the hip-hop community. I doubt he will.

Hip-Hop has a history of being very forgiving to horrible people, as long as your music bumps. Kodak Black has a fanbase that has to actively either defend or ignore his sexual assault charges, Chris Brown’s career is still very much intact after he abused Rihanna and it seems like everyone straight up forgot about Rick Ross rapping about dropping drugs in a woman’s drink to “Take her home and enjoy that.” I know he’s not technically hip-hop, but R. Kelly should be in prison for the rest of his life, and yet, to this day, his lyrics “My mind is telling me no, but my body’s telling me yes” are sung with gusto.

It looks as though the hip-hop community doesn’t care who makes good music as long as they can listen to good music. With new artists sprouting up every day, why do people feel the need to keep the abusers on a pedestal? At this point, I don’t think the question is if it’s a problem or not. It is.

While in some cases, the music might actually have a positive tone/message that overshadows an artist’s potentially problematic behavior. I personally have a problem with Logic using the N-Word. A friend of mine played “Everybody” by Logic and I was stunned to hear not only Logic saying the N-Word with a little too much gusto, but a dramatic pause afterword as if to say, “Yeah. I just said that. Listen to me.”

So I did. I asked my friend to play the line back so I could get some context, all while my white as snow friend repeated, “Don’t worry bro, he’s biracial, he can say it.” I listened again and heard the context. He explained that he has a black dad and a white mom and that being biracial meant he was never fully accepted by either community. As a black/black passing kid raised by two black/black passing parents, I obviously can’t speak on his experiences in that regard.

That said, as a black/black passing kid raised by two black/black passing parents, I don’t think it’s cool that the rapper that most people see as white uses the “N-Word”. While fans of his are so eager to point out his biracial heritage, most of the fans defending his use of the “N-Word” are white kids trying to let the white-ish rapper get away with saying it.

I see Logic as a door for white rap fans to say the N-Word. The Logic fans that I know, who defend him the most, are the very kids who don’t understand the social and historical implications of saying “nigga” at the end of a line. They don’t understand that hip hop was not, and is not for them like every other genre is. Hip-Hop is black culture turned pop culture and Logic is proof of this. What I am really wondering is, can you separate your appreciation for the art from the artist, and even if you do — will it change anyone’s mind other than your own? I don’t want to come across as a dick for ruining everyone’s favorite artists with the horrors of reality, but it is a hard balance to find, especially in a world that idolizes artists while overlooking their flaws.

Segaro “Bo” Bozart is a third year IMC Major, who is incredibly passionate about staying woke and would like others to do the same. They can be reached at sbozart@ithaca.edu