The Toxic Relationship of the Century 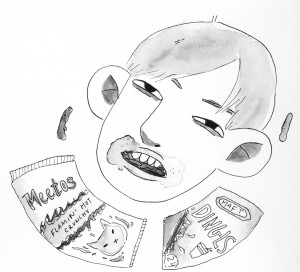 If we examine the United States in terms of the food it produces, it is likely that your mind will settle on the neon orange of Cheeto puffs, cheesy Doritos, the pastry puff of never-expiring Twinkies or the all-American classic, apple pie. Discounting the organic version of the latter, there is a common theme among every “food” product that was listed. While America is the melting pot of ethnicities, cultures and ideas, the American ideal for foods consists of chemicalized, over-processed, packaged foods.

So what is the significance, or the danger of these over-processed snack foods so prevalent in American culture? Mark Gehlhar, an employee at the Economic Research Service of the Agriculture Department, an institution that supplies economic research to help influence public and private decisions regarding economic agricultural policies, said artificial American foods are, “tailored for convenience,” more so than anything else, in an Interview with New York Times journalist Hannah Fairfield.

But what exactly does convenience mean in terms of the American lifestyle? Why do people choose junk food over other, more healthy options available to them? According to Derek Bryan, a contributor to Livestrong.com, a large part of it comes down to busy schedules obstructing the time and energy it requires to make healthier meals. Elements of addiction also play into why people crave the artificial flavorings and additive sugars.

According to an article titled “Addicted to Fat: Overeating May Alter the Brain as Much as Hard Drugs” Katherine Harmon writes , “Like many pleasurable behaviors—including sex and drug use—eating can trigger the release of dopamine, a feel-good neurotransmitter in the brain. This internal chemical reward, in turn, increases the likelihood that the associated action will eventually become habitual through positive reinforcement conditioning.” In other words, increased exposure to foods that are high in sugars and fats can increase an individual’s desire for these ingredients, and thus they will continue to buy and eat junk food.

Now, exactly what ingredients go into Coca Cola or Cheetos that actually make them so easy to manufacture and apparently highly addictive? Chemicals galore is the answer. According to a comprehensive list on Natural Society, a health foods news source, more than half of the ingredients used in junk food are chemicals like Aspartame, Sodium Benzoate, Orthophosphoric acid and Citric acid. Add an artificial sugar substitute and some carbonated tap water and you’ve got yourself an easily marketed soft drink with hardly any naturally occurring ingredients.

Who’s to blame for this craving epidemic for foods that add to your calorie count and orange-dyed fingertips? Marion Nestle, Professor of Nutrition and Food Studies at New York University, said it’s not just the people buying the junk food products to blame.
Nestle sees the reliance as a food industry issue, specifically that, “those products are cheap to make, last a long time, and are highly profitable.” Now there is an important distinction to make here, because while those processed foods may be at the forefront of everyone’s minds when it comes to “classic American foods,” there has been a definite shift in the amount of snack products available for consumers in the past three years alone. In a 2014 article for the Huffington Post fitness buff and writer Jill S. Brown wrote that, “the future looks bright for the companies providing us with healthy product choices.”

According to the Natural Products Industry Forecast 2014, “the natural products industry is projected to grow 51 percent to $226 billion by 2018.” This means, that while there may be a large market for junk food, healthy alternatives are becoming more and more available. Perhaps it just takes a change in perspective for the American people that are still creating a demand for junk food despite the growth in health foods.

But while Natural Food Companies may be following this trend in the year 2017, it doesn’t necessarily mean that the general public is taking into account the wide variety of snack options they have available to them. In a study published in the British Medical Journal Researchers Martínez-Steele, Monteiro, Baraldi and Louzada interviewed 9317 American participants about their intake of added sugars in ultra-processed foods. In the study Ultra-processed foods are defined as “industrial formulations which, besides salt, sugar, oils and fats, include substances not used in culinary preparations such as additives used to imitate sensorial qualities of minimally processed foods and their culinary preparations.” According to the results of the study, “Ultra-processed foods comprised 57.9 percent of energy intake, and contributed 89.7 percent of the energy intake from added sugars.” Essentially, while healthy options are available, ultra-processed foods still make up the majority of all the calories that Americans put into their body because of these artificially flavored food products.

Researcher Euridice Martínez-Steele elaborated on the social nature of the relationship between consumers, the food industry and unhealthy options. Martinez said “On one hand, the consumer is not committed with healthy eating, while on the other end the food industry finds limited barriers in producing the most profitable, but low quality, products.” But it doesn’t need to be this way. Martinez said that the best way to cut down on chemicalized food products as a staple in American diets is to identify the root of the issue in both the consumer as well as the industry.

“The consumer must seek to consume healthier foods and diets while the industry must strive to produce less ultra-processed foods and products rich in added sugars in favor of processed or minimally processed foods.” However, for this to happen, it needs to be addressed at a government level as well.

Michelle Obama promoted healthy food options while she served as first lady, and this model could be followed by public policy officials. At a government level, the taxation of products that are full of over-processed artificial ingredients and the subsidization of these funds into health food production would also be great modes of action to kickstart healthy eating. Martinez also said that the marketing and labeling of healthier food products will definitely need to be changed, an industrial and commercial shift that would maybe have an effect on the general attitude toward health food options.

Brown University PhD candidate, Emily Contois, who specializes in the connection between food, nutrition, popular culture and the American identity, agreed with many of the strategies Martinez proposed. However, she suggested that the current relationship between consumers and the food industry’s production choices is not something that can entirely be re-routed through any one of these proposals alone.

“Even as a scholar who studies advertising, however, it’s not the most effective strategy for supporting people to change their diets. Neither is nutrition education on its own. It’s far more effective to couple such strategies with efforts like policy change and the creation of health promoting environments—focusing on spaces of everyday life, like food markets, schools, workplaces, parks, and transportation systems,” Contois said.

So now, when you think of American food products, it’s very likely at first thought, you settle on junk-food. But perhaps that doesn’t need to be the case much longer, that is if American policy makers and food industry CEOs can see that nutrition experts, scholars and researchers are all saying the same thing. There is an inherently toxic relationship that currently exists between consumers looking for an easy way to buy food and a food industry that qualifies the overproduction of artificial foods with the quantity of funding it brings back into their companies. But there are also sustainable food companies like Organic Valley, Nature’s Path and Newman’s Own, to name a few. If companies like this received a bit more funding from the people who can afford to eat nutritious foods, perhaps policy makers could join in and enact some of the multiple possibilities for shifting Americans’ diets toward healthier options.

Mila Phelps-Friedl is a second-year journalism major who licked cheeto dust off her fingers to type this article. You can reach them at [email protected]