The Flaws of Free the Nipple

Breasts are not sex organs. They are not sexual until censored. In fact, my closest female friends and I send each other snapchats of our boobs almost daily. We’re cute and young, and we love our tits and each others’ tits. We are modern women, freeing the nipple and loving it. 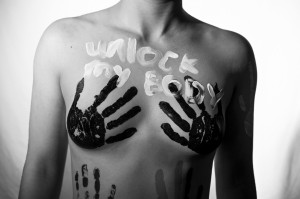 The “Free the Nipple” movement stemmed from Lina Esco’s documentary film, which follows topless women taking to the streets of New York City to protest the censorship of female nipples.

According to the Free the Nipple website, the film — along with the movement itself — aims to “[explore] the contradictions in our media-dominated society, where acts of violence and killing are glorified, while images of a woman’s body are censored by the FCC [Federal Communications Commission] and the MPAA [Motion Picture Association of America].”

That being said, Free the Nipple really only seems to benefit young, able-bodied, cisgender, white women — women who have set the American beauty standard already, women who are less likely to be denounced while topless. The majority of photos I see of breasts on the feminist-wide-web are of white, 20-somethings flashing without a care. Even the movement’s advertising and website is made up almost entirely of photos of young, white women.

Zing Tsjeng, a journalist for Dazed magazine, covered the lack of diversity in the movement in a 2015 article entitled “What the hell is #freethenipple, anyway?”

“Scrolling through the #freethenipple hashtag, you notice a few things: a lot of the posters are white, thin and able-bodied,” Tsjeng wrote. “Many are conventionally attractive; most of them are young. In short: no old, flabby, lopsided or wrinkly tits here.”

And honestly, there are very few people who were ever averse to seeing a healthy, white, young woman’s breasts in the first place. Not many people are screaming, “Keep your top on!” And while, of course, this movement is not a sexual one — it is not meant to benefit those who are just eager to stare at healthy, white, young boobs. It seems like those who are taking part in the movement are comfortable doing so because there a lesser stigma toward them already.

While the movement’s message is a strong one, the problem is it really only represents a small sector of the entire population of women. Feminism has a strong component of unity, and the core of the movement is all women standing together and being liberated together. So where are the old women, women who aren’t completely able-bodied, women of color, transgender women? I think that if an old lady were to “free her nipple,” everyone might be like, “Whoa … um, maybe we should repress the nipple a little bit.”

The 2015 article “Bringing Diversity to #FreeTheNipple with #LiberateAllNipples,” written for Wear Your Voice, an online intersectional feminist publication, points out the inequality in the movement. The article focuses in on the Daily Mail’s coverage of National Topless Day, in which only seven of the 60 topless women photographed were women of color. The article goes on to write, “#Freethenipple proclaims to end the objectification of women and rape culture, but if we consider that black women are at greater risk of being sexually assaulted than their white counterparts, why are the women who are most vulnerable eliminated from such a potentially powerful campaign?”

Women are not truly liberated until all women are liberated. Feminism is about unity and equality. While it really feels like modern feminism is moving in a positive direction, there needs to be wider and more inclusive representation.

Lizzy Ring is a first year writing for film, TV, and emerging media major who wants you to keep your eyes up, buddy. You can reach them at ering@ithaca.edu.