From Birth Control to Mood Control

When I walked into the reproductive health nurse’s office in my high school, she introduced me to a variety of birth control making sure to mention their tendencies toward significant mood swings and depression, both of which I have experienced ever since my decision to receive the Nexplanon implant. The Nexplanon implant is a type of birth control inserted through one’s arm and can last for three years.

A study conducted by Danish researchers found that more than a million women between ages 15 to 34 have a 40 percent increased risk of depression after four months of birth control use.

Birth control provided for women has significantly progressed since the pill was approved in 1960. A National Health Statistics report published by the CDC in 2012 revealed that 62 percent of women who are of reproductive age are on some type of birth control, ranging from pills to female sterilization.

Most birth control options for women function through the manipulation of hormones which messes with the balance of the brain’s “feel-good” neurotransmitters such as dopamine, serotonin and norepinephrine. This often influences the patient’s moods and can cause or magnify the effects of mental illnesses such as depression and anxiety. For pills and pill combinations such as Ortho Tri-Cyclen and Ortho-Cyclen, mental depression is a side effect often listed by physicians.

Brenda Contreras is a Colorado State University student who is currently on birth control and has experienced the mood changes it carries.

“It was the end of my senior year of high school and I had shown up to finish my final exam for my Calculus II class,” Contreras said. “I was under a lot of stress to finish high school with good grades. When the teacher came around to give me my test, I felt an extreme sense of shame and guilt, that I had let him down somehow. 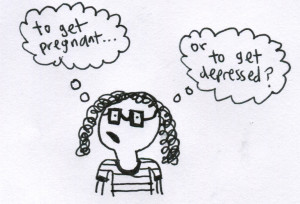 And afterwards, I couldn’t even focus on my final because I was trying so hard not to cry. Eventually, I couldn’t take it anymore and basically just ran out of the classroom to the bathrooms across the hall to let it all out… I am not a person who cries easily.”

Birth control affects different people in different ways. Contreras believes that depression was not a specific issue for her despite the mood swings. “I would not say I felt depressed but it’s difficult for me to give a clear answer without the help of a medical professional because of my perceived attitude and personality,” Contreras said.

The connection between birth control and depression is even stronger when the patient has prior experience with mental illness. “Even before I got the birth control I was depressed but now it’s magnified and I don’t know if it’s the things at home or birth control or both,” Zulma Reza-Alarcón, a college student who is also currently on the Nexplanon implant, said.

“My emotions were everywhere,” Reza-Alarcón continued. “The strongest ones were the sad and angry feelings. Everything irritated me, from the smallest push to an insult. I would get sad over everything and cry.” While she is on her third and last year of Nexplanon, she claims the magnitude of the side effects of the Nexplanon has not decreased in any way.

As for the toll the birth control took on me, panic attacks had become more frequent, mood swings were undeniable and when they occurred, I would often ask myself why I felt the way I did — and remember the side effects of the birth control. Despite knowing and telling myself repeatedly that my feelings and thoughts were irrational before attempting to dismiss them, they were thoughts I had no control over. Upon the insertion of the implant, the nurse made sure that I was aware of the side effects and circled “St. John’s Wort” which is an antidepressant that Nexplanon users must avoid or else the birth control would be ineffective.

Ortho Cyclen, a birth control pill, was rated 7.6/10 on drugs.com. A majority of the low scorers claimed that pills heightened their depression and anxiety, one patient who took the pills for 2 to 5 years even revealed that they had suicidal thoughts and ignored their depression, thinking that it was perhaps just the way their life was supposed to go. Another comment on the review page claimed that they were severely depressed and developed social anxiety, but once they were off the pill, their mood significantly lifted.

In a list from the same website of different contraceptives, a majority of the birth control types listed mood swings, depression or mental depression as a side effect with the rating averaging at a 6.0/10.

Women being able to choose what do with their bodies, such as take birth control, is an undeniable sign of progress, and while a 40 percent increased risk of depression is not the majority, it is still significant and doctors still make sure to warn women of this side effect.

Despite there being more options for women, research and personal experiences have shown that it all boils down to an ultimatum, having to choose between two things that are not desirable: unwanted pregnancies versus mental illness or severe mood swings. What choice really is present?

Berellyn Alberca is a first-year chemistry major who always reads the side effects. You can email them at balberca@ithaca.edu.