Buzzing Out of Existence 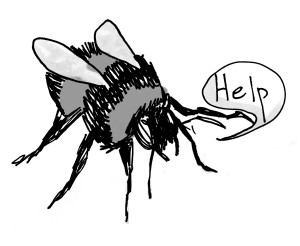 A group of students stands on a roof at the University of Wisconsin-Madison. Clad in protective suits, they gather under the late summer sun surrounded by thousands of honey bees. This up-close interaction is a requirement for their Insects and Human Culture class. Trading in their notebooks for beehives, the students get up close and personal with the threatened pollinators they learned about in the classroom.

“I’m trying to get this population of college students to appreciate what honey bees are, what we have and the threat they are under,” said Dr. David Hogg, entomologist and professor of the class.

These honey bees, working in their rooftop hives and flying around Hogg and his students, are facing a danger shared by their comrades around the United States. Annual losses for managed honey bee colonies, meaning they are domesticated by beekeepers, were recorded at 42.1 percent in the 2014-2015 season, according to preliminary results of an annual study conducted by the Bee Informed Partnership, the Apiary Inspectors of America and the United States Department of Agriculture.

This is the second-highest annual loss recorded to date, showing an increase from the previous year, when about one-third of colonies were lost. During the 2014-2015 winter, 23.1 percent of managed U.S. colonies did not make it through the season, showing a .6 percent decrease from last year, according to the report.

With one-third of all food consumed by humans in the United States directly or indirectly affected by honeybees, according to the United States Department of Agriculture, the trend of bee loss will be detrimental to the current human population, as well as the environment as a whole.

Bee losses are occurring for a variety of reasons. According to the Environmental Protection Agency, disease, pesticide poisoning, stress due to bee management and environmental changes are all factors that may be contributing to this concerning trend. One of the biggest threats to honey bees are hive invasion from the Varroa Mite, according to Emma Mullen, Honey Bee Extension Associate for Cornell University’s Department of Entomology.

“There are lots of different parasites and diseases that affect honey bees,” Mullen said. “Probably the biggest issue right now is this mite. It’s called the Varroa Mite…it’s basically a nasty parasite and it’s very hard to control.”

The Varroa mite sucks the blood of the bees, causing weakness and a shorter lifespan, according to a report by the University of Kentucky’s Department of Entomology. The mites develop on the bee larvae and spread to other colonies by traveling on workers and drones.

“We see our typical losses, but I don’t think winter itself plays as big a part as other factors…” he said. “That mite will spread 17 plus viruses through the hive, and as a result, in the winter…the viruses take their toll, because a healthy hive is able to survive the harshest winters.”

The use of pesticides may also be detrimental to bee health, according to the EPA.

“It is a very complicated subject,” Mullen said. “One of the biggest ones in the media right now are neonicotinoids. There are some countries…that banned neonics. There is still a lot of controversy about the studies themselves.”

A 2012 review by the Xerces Society for Invertebrate Conservation concludes that overall evidence suggests that neonicotinoids are harmful to bees. It also states that there have not been properly-conducted field experiments carried on over a sufficient period of time.

However, inconclusive research, Mullen said, leaves room for question when gauging the true effect of pesticides on bees.

Bee management is also a factor when considering the cause of bee loss. Many large-scale beekeepers move their colonies to warmer climates in the winter in order to pollinate crops. This form of bee management could be causing additional stress on the colonies, leading to loss of the hives, Hogg said.

Bee loss, according to Hogg, could also be the result of the changing landscape of agribusiness.

“I think it’s happening as a result of the way people do agriculture,” he said. “There is no simple solution. I think there are a lot of things at play, but the big migratory beekeepers that move their colonies around to pollinate various crops around the country, because they get paid a fair amount of money to do that, I think it’s a major contributor because it’s putting a lot of stress on the bees.”

This practice of large-scale beekeeping also decreases the amount of attention given to each hive, while also homogenizing the treatment of the colonies, Hogg said.

“If you can pay attention to each hive, you obviously know the needs of that hive, whereas, if you have 2,000, you just have to apply the same thing to every hive,” he said. “You don’t have time to look into it and diagnose what’s going on. So, for treating for mite, for example, you just automatically treat every hive.”

“Normally if I do nothing to a hive, it’s going to die within three years from the buildup of the [Varroa] mite,” he said. “If I stay very aggressive, and keep my mite levels really low, it is incredible how healthy that hive is and how long that hive will last.”

“We are seeing some beekeepers who are actually giving up their business because it’s too expensive to maintain it this way and they are not making a profit,” she said.

These beekeepers will feel the most significant effects if this trend of bee loss continues, Mullen said.

“What growers will do is rent honey bee colonies to come in and specifically pollinate those crops,” she said. “So, as we are losing colonies to different factors, things like the mite, or nutrition, or maybe pesticides, this will drive the price of colony rentals up significantly. Now growers pay a lot more money because there is a lot more demand for these colonies and not as much supply for the colonies.”

One of the greatest concerns of the last decade was Colony Collapse Disorder (CCD). CCD spiked it the winter of 2006-2007, when beekeepers were losing 30 to 90 percent of their hives, according to the EPA. CCD occurs when the majority of a colony’s worker bees disappear, leaving behind the queen bee, honey and pollen. Few bees are found dead near the hive and there are not high levels of the Varroa Mite or other diseases.

CCD was a problem nationwide until about 2010, when percentages of collapsing hives leveled out again. According to Mullen, CCD is not synonymous with colony loss.

Even with CCD under control, general colony losses remain as an alarming concern. In the short term, research is able to compensate for these losses through the use of wild bees, for example. Eventually, however, agriculture could see a larger impact, Mullen said.

“We are at the point where we are still able to have enough colonies to do these pollinating services for agriculture, but if things get worse than they are, or we can’t find a solution, or figure out how to mediate these colony losses, then there can be impact for agriculture,” she said.

This impact would land right into the plates — and wallets — of food consumers. If losses continue at current rates, and the cost of pollination services increase, food costs will increase, according to the USDA.

The larger picture of agriculture, environmental health and human health is tied to the health of insects, which has been impacted by habitat loss, Hogg said.

“We are doing agriculture totally differently,” he said. “And every decade it seems like there is another shift in the way we do things, that’s maybe not friendly insects in general. A lot of it is habitat loss, by getting rid of the plants and having large monocultures where you are just growing one plant on large acreage.”

Movement toward a more natural ecological process, he said, could alleviate the impact of monoculture and other human activities.

“I’m a big believer in what is called agroecology, where you’re trying to use knowledge of the ecological relationships to try to make agriculture look as close to nature as possible,” he said.

For the students in Hogg’s Insects and Human Culture class standing on the roof surrounded by colonies of honey bees, they may, in this moment, be the closest they will ever be to the nature of bees. For timid students, Hogg emphasizes this point and encourages them to pull out the bee frames with their gloved hands.

“This is probably the only opportunity in your entire life you’ll have to pull out this frame,” he says to his students.

This depth of understanding for the needs of bees brings the statistics of colony loss to life, making the reality honey bee loss impactfully clear. An increase in honey bee deaths, leading to a world with less pollinators, would completely change the environment as humans enjoy it today. By emphasizing the interconnectivity between human life and bee health, the reality of bee loss can create a buzz of urgency for human action.

Emma Rizzo is a senior journalism and Spanish major who cries over spilt honey. Email her at erizzo1@ithaca.edu.