The Hypocrisy of the “Pro-Life” Movement

When being pro-life only extends until birth

“The Republican Party must continue to uphold the principle that every human being, born and unborn, young and old, healthy and disabled, has a fundamental, individual right to life.” — Republican National Committee for Life.

Today it is so easy to be a hypocrite. You hate trashy reality TV, yet you secretly binge watch the Kardashians for hours. Or you call yourself a vegetarian, yet every once in a while you sneak a little chicken finger to satisfy your hunger.

However, with something as challenging as the issue of pro-life, in which most involved have a steadfast position, it doesn’t seem as though hypocrisy would be likely to occur. Yet that seems to be the status quo for so many widely recognized groups advocating for the pro-life movement, especially the GOP. It is far too common within the Republican party to see an overlap of support for pro-life combined with support for defunding welfare, banning contraception or making access to it more difficult, anti-gun control laws and the death penalty — all decidedly anti-life positions. 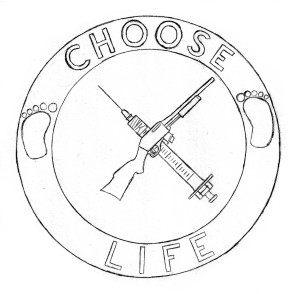 What we see is that the GOP is pro-life until birth, after which the ones most in need of help — single mothers and low-income people — are left to fend for themselves.

Economics
An article from the Huffington Post by Warren Blumenfeld that was published in May 2015 and titled “The Hypocrisy of ‘Pro-Life’ and the GOP,” encapsulated the failure in logic in the Republican party’s pro-life beliefs. The article discussed how the GOP is in favor of helping the wealthy, but its policies often come at the detriment of the poor, the people who need the most help to stay alive.
“Under its understanding of being ‘pro-life,’ in its policies and accumulated legislative actions, the GOP fights for the lives of the upper 10 percent of our population who control approximately 80–90 percent of the accumulated wealth and 85 percent of the stocks and bonds,” Blumenfeld wrote. “It works to keep corporative and executive tax rates lower than the rates of the secretaries who work in these corporations.”

As a result, there is a climate of little economic mobility for new mothers looking to maybe try and earn a few dollars for their families.

And so in addition to the poor job market, it is likely that these same women will have limited access to government welfare that exists today, and even less in the future if things work out the way the GOP and many pro-life supporters hope. In May 2014, The Atlantic published an article stating that while many programs have grown in the United States, welfare that assists new unmarried parents has not.

In a study for the journal Demography published in 2014, economist Robert Moffitt details how “the poorest single-parent families — 80 percent of which are headed by single mothers — receive 35 percent less in government transfers than they did three decades ago.”

The Republican party, which has been steadfast in its support of cutting welfare to people who need help getting by, shows its hypocrisy when it advocates cuts to government aid that would help single mothers, and as a result their children, have a shot at a better life. This is yet another example of the Republican party being pro-life until birth.

To be fair, it’s not always Republicans slashing welfare. In 1996, when former president Bill Clinton decided to put an end to “welfare as we know it,” a five-year cap was put on the program, which includes food stamps. A 2012 New York Times story estimated that, “one in every four low-income single mothers is jobless and without cash aid — roughly four million women and children.” In the government in general, but especially within the Republican party, there is a real climate of pushing single parents under the rug, those same mothers whose fetus’ pro-life supporters were adamant about saving.

Contraception and Restricting Abortions
As well as unfair economic situations for new mothers, there is the contraception problem. How does one suppose that fewer abortions will be necessary if there is not increased birth control use?

An article by CBS News from 2012 reported on a long-term study in St. Louis that offered women the free birth control of their choice. The study revealed that, amongst other positive effects, the program lowered the abortion rate for participants. There were 4.4 to 7.5 abortions per 1,000 women in the program. This is compared to the national average, which is almost 20 abortions per 1,000 women nationally.

Reducing the number of abortions through increased use of contraception is pretty common sense, so it really is absurd that anyone, particularly those so staunchly against abortion — such as the GOP — would oppose birth control legislation and funding. And yet it’s in the news all the dang time with conservative’s war on Planned Parenthood.

In addition, abortion rates do not decrease in countries where it is illegal.

“We now have a global picture of induced abortion in the world, covering both countries where it is legal and countries where laws are very restrictive,” Dr. Paul Van Look, director of the World Health Organization’s Department of Reproductive Health and Research, said. “What we see is that the law does not influence a woman’s decision to have an abortion. If there’s an unplanned pregnancy, it does not matter if the law is restrictive or liberal.”

So being “pro-life” would mean protecting the lives of mothers by ensuring that they have access to safe abortion procedures right? Wrong. During the first Republican presidential debate, then-presidential candidate Scott Walker was asked about the GOP’s position of banning abortion. Walker had previously asked Wisconsin legislature for a 20-week abortion ban that had no exceptions for rape and incest, clearly an extreme situation in which the life of the mother should be taken into account by the pro-life Walker.

His justification was that: “I believe that is an unborn child that’s in need of protection out there, and I’ve said many a time that that unborn child can be protected, and there are many other alternatives that will also protect the life of that mother. That’s been consistently proven.”

Republican candidate Marco Rubio also stated in the debate that he does not favor exemptions in anti-abortion laws for cases of rape or incest. His, and Walker’s, position are hypocritical however, as both should be pro-life when it comes to the well-being and life of a woman that has been the victim of rape, and not just focus on the fetus.

Guns
And then there are pro-life gun nuts. Seems contradictory doesn’t it? In October, The Daily Show’s new host Trevor Noah perfectly pointed out the insanity of being pro-life and anti-gun control.

“Imagine if we could bring some of that pro-life passion into being more, well, pro-life,” he said, referencing the high number of people in the U.S. that are shot each year. “But right now, they’re [pro-life advocates] more like comic book collectors. Human life only matters until you take it out of the package, and then it’s worth nothing.”

According to an article by Forbes published in 2015, at least 32,000 people are killed from guns each year, and yet there seems to be a peculiar overlap between pro-life supporters and pro-gun supporters. Many conservative Republicans don’t support common sense gun legislation. When commenting about the October mass shooting in Oregon, presidential candidate Jeb Bush responded by saying: “Look, stuff happens. There is always a crisis…” But when asked about abortion he said: “I’m completely pro-life and I believe that we should have a culture of life.”
That seems like a more appropriate response to a shooting than essentially, “shit happens.”

And then there is the blatant hypocrisy of pro-life people themselves committing acts of violence. Just recently, Lewis Dear carried out an attack on the Planned Parenthood clinic in Colorado Springs. He’s charged with the murder of three people, including a mother of two, an Iraqi War veteran and a police officer. Dear, who has proclaimed himself as deeply religious, is noted to have mumbled something about “baby parts” while being taken into custody. And this is not the first time something like this has happened.

According to those statistics, there has been a multitude of violence committed against abortion providers. There have been eight murders, 17 attempted murders, 429 death threats, 199 incidents of assault or battery, 100 butyric acid attacks, 400 invasions, 42 bombings, 663 anthrax threats and four kidnappings against these providers. These instances are examples of the “supporters of life” being outright violent and downright anti-life.

The Death Penalty
As for the death penalty, out of 33 states that restrict public funding to abortion, 27 permit death sentences, according to an article from Slate published in 2014.
Mike Christian, a pro-life Oklahoma state representative, told The Associated Press: “I realize this may sound harsh, but as a father and former lawman, I really don’t care if it’s by lethal injection, by the electric chair, firing squad, hanging, the guillotine or being fed to the lions.”

He also threatened to impeach judges who dared delay executions for any reason. What? You care about a fetus more than a grown human person, to the point where you could care less if that person is brutally slaughtered. Especially when a study showed that 4 percent of inmates sentenced to die are innocent, as reported by The Guardian in 2014.

The whole ideology and consistency of the Republican’s position on pro-life is confusing, but I guess we can just leave it up to pro-lifers and the GOP to sort it out for themselves.

Anna Lamb is a freshman journalism major who is pro-cancelling finals. You can email her at alamb@ithaca.edu.