Surrounded by the chatter of other young professionals, Sarah Matte stands in line with her roommate outside of a restaurant in Los Angeles. There they stand for a half hour before being seated. This wait has been mirrored by people in cities across the country and world. Sidewalks in different time zones have been occupied by those anticipating a cherished weekend pastime: brunch.

The pair repeated this arrangement about twice per month. Eating brunch together became a special part of their friendships, Matte said.

“I like the idea of stumbling out of bed and meeting somebody,” she said. It is a very communal experience .

The practice of brunching began in England, growing in popularity until it evolved into its modern form in the beginning of the 21st century with the onset of the economic recession, according to Farha Ternikar, sociologist and author of the book “Brunch: A History.”

“What we see is that with the high cost of living and the recession … not everyone can afford their dream home or their vacations, but the lower-middle class and the middle class can still afford little luxuries like gourmet food,” she said. “Food starts becoming an indicator of status.”

The status associated with this brunching population is one embodied by what is known as the creative class. This class, which includes people such as Matte and her roommate who both work in the entertainment industry, is made up of working individuals who often working independently in innovative and creative fields.

A privileged social and cultural upbringing is often a common denominator in those enjoying their membership to the creative class, Ternikar said.

“You get these young, liberal, hipster artists and they aren’t all making 100,000 dollars a year but they know something about food trends,” she said. “They know what kale is … and the majority of them are coming from educated, middle class families, and even though they may not be making as much money as their parents … they have the cultural capital to know where you can go to get brunch.”

With this social and cultural capital in hand, members of this class are able to direct their consumption decisions toward what is trending at the time, Ternikar said.
“This creative class or this leisure class, they are part of this pattern of conspicuous consumption,” she said. “Basically brunch has manifested in symbolizing a way that people are able to be seen, and show that even though they don’t have the economic resources, they still have the cultural capital to know what’s cool, what’s on trend.”

Shawn Micallef, author of “The Trouble with Brunch: Work, Class and the Pursuit of Leisure,” also critiques the societal pattern of consumption as a representation of status.
“Brunch is this performance of middle class leisure,” he said. “Big cities that have a robust brunch culture have kind of gotten a bit out of control.” 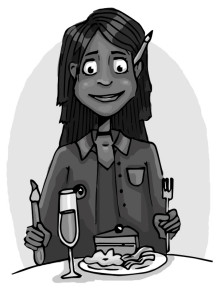 “You had to go to certain spots, right?” he said. “These cool, trendy brunch spots. They were often in old storefronts. The tables were all mismatched and your knees would touch your neighbor. The wait staff would be grumpy and kind of resentful of your presence, because they were usually hungover artists and the whole thing was kind of unpleasant.”

According to Micallef, the members of the creative class who frequent these brunch restaurants are working in the knowledge economy, the name suggested for the modern, information and entrepreneurship-driven workforce. These workers are driven without benefits or a pension, much like workers in the service industry.

“[The service class] is not that much different from the knowledge workers or young creatives, who are working in these other areas that are more valued by society and maybe are getting paid a little bit more,” he said.

The main difference between the two classes, however, is the inner notion of being in the middle class, which exists beyond monetary income, Micallef said.

“There is a fair amount of mobility to get into the creative class but there are also a fair amount of barriers,” he said. “You have to be able to rustle up a certain amount of social capital and cultural capital, and not everyone has the means to do that.”

Those in possession of this cultural capital also have the privilege of time, Terniker said.

“Brunch has come full circle from being this elite institution to now this hipster institution where even if you’re a student you can brunch,” she said. “Because students may not have excess economic capital but they have the time.”

This concept of excess is key in understanding the participation in food trends such as brunch, Terniker said.

“Brunch, in the end, symbolizes excess,” she said. “Excess consumption, excess money, excess time and ultimately also, brunch is the one meal where you can have bacon, cake and alcohol. There’s no limit to what you can eat at brunch. There’s no judgement of having alcohol before noon on a Sunday if you’re out to brunch.”

It is this culture of excess that warrants critique, as opposed to the meal itself, Micallef said.

“[The book] became not a condemnation of brunch but a vehicle to talk about wider class implications and precariousness,” he said.

The meal that has come to symbolize excess began in England as the lunch-breakfast hybrid of the society’s elite, Ternikar said.

It then spread to the United States as a meal enjoyed by college-aged men in the early years of the twentieth century, Ternikar said. Brunch then gained popularity with the upper class in the Northeast in the 1920s. It was in the 1980s, she said, that the meal expanded to the middle class, gaining a following amongst other food trends, such as vegetarianism, in the 1990s.

21st century brunch, with this large following, became an integral part of leisure. The social culture surrounding brunch, in which people want to be out spending time with other people, is positive overall, Micallef said.

“There are genuine reasons why people love brunch,” he said. “It is that kind of community with your friends over dinner. It’s an ancient thing we do. We talk and relate to each other while we’re eating. It’s some kind of human impulse.”

Matte, as a twenty-something living in a city, said young people today seem to prefer brunch over other meals as a social gathering.

“It is social,” she said. “It is something people tend to enjoy, and maybe they enjoy it a little more than going out to dinner … it does seem to be that more people would elect to go out to brunch than they would to go out to a meal.”

Brunch, as a habit of the creative class, is also a unifier in a culture of remote work, Micallef said.

“A lot of the work people do in this so-called creative class is very individualistic,” he said. “You are a painter. You are a writer. You make earrings. You produce copy for technical books, whatever … there’s not that unifying identity among creative workers but everybody seems to like to go to brunch.”

The popularity of brunch as this shared leisure pursuit does not seem to be waning, Terniker said.

With brunch remaining a part of modern culture, however, it is important to be mindful of its representation of inequality, Ternikar said.

“I think brunch is always going to be here,” she said. “It is always going to absorb different trends … Brunch is an indicator of gentrification, and changes, and economic climate of a community. The same way as when you get a Starbucks or Target in your neighborhood. I would say it signals that there are definitely changes happening.”

Food consumption patterns overall are indicative of this social evolution, she said. Coffee and chocolate consumption, for example, are also indicators of how contemporary society is measuring status. As consumption and status continue to be emphasized, Ternikar said, consumers need to be mindful of the implications of their spending habits.

“Ethical consumption is really something that Americans need to think about really carefully,” she said. “I think that’s really where we can understand what is going on in our society. How much of it is marketing, neocolonialism and capitalism intersecting with multinational corporations and how much of it is actually individual choice?”

Emma Rizzo is a senior journalism and Spanish double major who likes to have breakfast for under 15 dollars, thank you very much. Email her at erizzo1@ithaca.edu.