Call for Rochon’s resignation and changes to the campus climate

At 4:53 p.m., POC at IC posted on Facebook that the occupation of the Peggy Ryan Williams Center is officially over.

The occupation of the Peggy Ryan Williams Center is continuing.

As of 11:50 a.m., a few members of POC at IC are on the third floor of PRW in front of President Tom Rochon’s office. It appears as if a few sleeping areas have been set up on that floor as well.

A Public Safety officer is present on the third floor.

The second day of the occupation of the Peggy Ryan Williams Center is drawing to a close. As of 9:45 p.m., over 60 people were still inside the building.

Public Safety officers have maintained a presence in the building and are checking everyone who enters PRW for a college ID.

POC at IC members occupied the building throughout the day.

At 8 p.m., the group held a teach-in led by Belisa Gonzalez, associate professor and director of the Center for the Study of Culture, Race, and Ethnicity. The discussion centered around being an “ally” and touched on points regarding how to be a better ally and whether being an ally even exists, among other topics of discussion. Close to 100 people were present during the teach-in.

The discussion lasted until approximately 9:30 p.m.

According to the POC at IC Facebook page, the group plans to occupy PRW until noon on Dec. 11.

POC at IC has announced they will be sleeping in the Peggy Ryan Williams Center for the remainder of the nights this week.

“Assata Shakur once stated, ‘Nobody in the world, nobody in history has ever gotten their freedom by appealing to the moral sense of the people who are oppressing them.’” 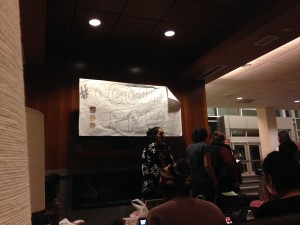 So said the activists from the group POC at IC, which stands for People of Color at Ithaca College. POC at IC began an occupation of the Peggy Ryan Williams Center — the primary administrative building on campus — demanding that President Tom Rochon resign. The occupation began at 9 a.m on Dec. 7 and continued after PRW had closed for the day. POC at IC said they plan on staying until the morning, at least. Food has been brought in preparation of the overnight occupation.

On the Facebook event’s description, POC at IC wrote: “An occupation done in the spirit of protest is entering and holding space within a building or a site that holds symbolism. Occupations typically challenge ownership or usage of the space in question, while pushing to redefine the space being held. Since this is a protest, various occupations last different lengths and can extend for days, weeks, months and even years.”

Several members of POC at IC declined to comment on the occupation.

The action comes after a semester of upheaval in which protests have rocked the campus regarding racially charged incidents, an alleged culture of racial bias at the college as well as a perceived lack of inclusivity in the college’s governing structure. The protests have focused on the removal of Rochon based on the demonstrators’ belief that Rochon has failed to create a safe campus environment for people of color.

The protests this semester have been spearheaded by POC at IC and were sparked by racially charged comments made by Public Safety officers during resident assistant training, as well as by a party theme of “preps and crooks” by the unaffiliated fraternity Alpha Epsilon Pi that many students found racially offensive.

In addition, remarks made at the “Blue Sky Reimagining Kick-Off Event” on Oct. 8, in which two white alumni panelists referred to an alumna of color panelist as “the savage” sparked outrage from many students and faculty. Many questioned the administration’s delayed response to the Blue Sky Reimagining compared to the speedy response to the fraternity party, as well as the nature of the administration’s response to the Blue Sky event, which essentially said the college could not prevent hurtful language. 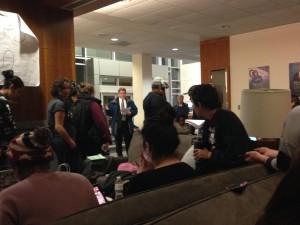 At 3:15 p.m., with over 50 people spread across the PRW lobby, two members of POC at IC made a statement in which they said the occupation of the PRW would continue after the building’s doors locked at 5 p.m.

“POC at IC is now occupying PRW … take up as much space as possible,” the activists said.

There were still over 30 people occupying the lobby of PRW as of 5:15 p.m., including at least one faculty member.

An investigator for the Office of Public Safety and Emergency Mangagement, who was inside PRW after the building closed, said he had no comment regarding the protests except that the college’s Core Emergency Response Team would make the decision of how to respond to the occupation.

At 6 p.m., Terri Stewart, director of the Office of Public Safety and Emergency Management, and several Public Safety officers walked across the PRW lobby and into a closed door meeting. At 6:09 p.m., Benjamin Rifkin, vice president and provost for educational affairs, addressed the occupiers. Standing with Rifkin were Stewart and Nancy Pringle, vice president and general counsel of legal affairs. Rifkin said to the occupiers:

“Good evening, everyone. I just want to reinforce that Ithaca College respects the protest movement’s desires to make the PRW a safe space for them and for everyone after hours. So, the building normally closes at 5 p.m. so the doors automatically lock. You will be able to access all the buildings public spaces, we will not prevent students and faculty from coming and going, however the doors are locked. Public Safety officers will be at the entrances of the building to ensure safety.”

Rifkin added that only people with a valid Ithaca College ID would be let into the building and requested the occupiers keep the building clean. He also reminded the students that normal college policies regarding threats to property and fire violations are subject to judicial affair referrals, as always.

A faculty vote of no confidence has also been initiated. The results of that vote will be released Dec. 14.

In their statement, the POC at IC members said Rochon seems unaffected by the results of the vote.

“Despite all of this, Tom Rochon sits in his office with firm conviction that he is equipped for his job,” the activists said in their statement. “And while the administration expresses its support for the transformative change we desire, their actual solidarity has been proven faulty through the lack of immediate action regarding even addressing his removal.”

The activists said it is not the administration that holds the power.

The statement continued, saying the movement at the college is about giving stakeholders the agency to reject oppressive structures imposed by the college. The activists said the movement has the potential to bring the campus community into administrative affairs and reform the top down structure of governance at the college.

Freshman Rianna Larkin said she felt the 3 p.m. statement given by activists from POC at IC is similar to those given by the group in the past.

“At this point I really feel like they’re saying the same thing because they haven’t been heard,” she said. “[They were] just talking about all of the people here, especially people of color, and how important it is to listen to them.”

Sophomore Ariella Ranz said it is essential to stay at the occupation for as long as possible.

“I feel like this is, not exactly an obligation, but it’s necessary that people participate in the protests because even if you’re not in the POC community, it’s important that people still care about the issues and movement,” Ranz said.

This story will be updated.