Laws harm the very teens they are meant to protect

Sexting laws were put into place with good intentions. In 2003, The Prosecutorial Remedies and Other Tools to end the Exploitation of Children Today (PROTECT) Act was passed making it a crime to produce, distribute, possess or receive an explicit image of a child under the age of 18 nationwide. These laws were meant to protect teens from child predators and child pornography charges. 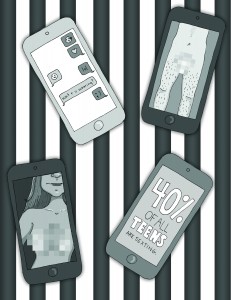 There are additional laws which vary from state to state but are linked by the philosophy that anyone, even those who are not yet adults, caught with sexually explicit pictures of minors will be charged. Throughout the United States, possession of a sexually explicit picture of a minor, distribution of the picture and promoting, coercing or soliciting are all crimes in and of themselves. In the state of New York specifically, persuading a child to make pornography is a class C felony which is punishable by up to 15 years in prison. Possessing child pornography can be punishable by up to four years in prison, while promoting an obscene sexual performance by a child is punishable by up to seven years of imprisonment.

Cormega Copening, a 17-year-old football player in North Carolina, was found with naked pictures of himself on his phone earlier this year and was charged with two counts of sexual degree exploitation of a minor and three counts of third degree sexual exploitation of a minor. His 16-year-old girlfriend was also charged and accepted a plea deal. Each count is a felony charge which could land Copening two years in jail for each count.

In the United States, there are varying ages at which children are recognized as adults, can drive or possess different kinds of firearms. Dr. Elizabeth D’Amico, adjunct professor of social work at The University of Connecticut and a program manager at The Connecticut Department of Children and Families, said that there should be a consistency for when an individual’s minor status expires.

“One of the things in this country that I think is really hard is that we have different ages for things,” D’Amico said. “So we call you an adult for this or that. Like when you are 16, you can drive in most states or you can vote when you are 18 but you can’t drink in most places until you are 21.” She said that if a teenager is able to have consensual sex with someone of the same status as them, then sending pictures to the person consensually should not be illegal.

Connecticut civil, criminal and family law litigator and trial attorney Drzislav Coric agrees that consistency should be enforced. “When laws are made, I don’t think the legislators who make the laws always think them out and understand all of the consequences of them. They try to solve a specific issue, which is usually some issue in the news for some reason, and then they try to resolve that issue and don’t see how it is going to have an impact on other things.”

In the age of cyberbullying, teens have found more ways of humiliating their peers beyond the classic ostracism, alienation and physical harm. The High School Youth Risk Behavior Survey identifies that 14.8 percent of students surveyed nationwide were bullied online. In this increasingly digital world, a type of bullying emerged in which sexual pictures of teenage girls and boys have been sent around in mass texts. These incidents can contribute to harassment of teens, and in some cases to the point of suicide, such as 13-year-old Hope Witsell, who ended her own life in 2009 after topless pictures of her were circulated throughout school.

These stories have found themselves in the middle of the public’s attention. Because of circumstances such as Witsell’s, teens are facing harsh punishment for sending pictures to just one person, as significant others. In 2014, Trey Sims, a then 17 year old from Virginia was charged with manufacturing and possessing child pornography after exchanging sexually explicit photos with his girlfriend.

In an interview with The Washington Post, his attorney Jessica Foster said, “The goal [of the law] was to protect children from injury. The problem is, here, there is no victim, because it’s very clear from the text messaging that these two had a consensual relationship. It’s not illegal for them to have a sexual relationship. … This is a law to protect juveniles, not to prosecute them, not to create more harm.” In the end, Sims was given 100 hours of community service and put on probation for a year.

Criminal records can be debilitating for minors because of the permanence of the consequences that may be associated with their charged crime. Minors found guilty of possession of child pornography could end up on the sex offender registries and could spend time if prison.

After serving time or while being on the register, finding a job can be extremely difficult. According to a 2010 survey conducted by the Society for Human Resource Management, inquiring if criminal records affected being denied jobs, 74 percent of the members of SHRM who responded reported that even a nonviolent felony conviction would be “very influential” in the employer’s decision not to hire the individual.

Status equals, or two minors in a relationship, are ending up being classified as sex offenders or serve time in prison and when applying for college or a job, there is often no room for an explanation for why they are on there, they generally just check a box. Even if potential employees were to explain their circumstances, as soon as they start to mention sexting or naked pictures, the chances of being hired may drop substantially.

An attempt by state governments to keep nonviolent criminal offenders out of the traditional criminal justice processes are called pretrial diversion programs. Those who have access to these programs may forgo community service or in some cases or go through sexual education classes to learn about the social dangers and legal consequences of sexting, Coric said.

For example, a 17-year-old student at Oliver Ames High School in North Easton, Massachusetts had received and saved nude pictures of other teenagers on the app Snapchat. He underwent an investigation by the police and The Bristol County District Attorney’s Office and agreed to a pre-trial diversion offer and had to complete 40 hours of community service.

Coric voiced his support for the programs because they keep children out of prisons. “I think that certainly giving people a break when they make a mistake especially if they don’t have a criminal history is a plus on many levels,” Coric said. “There are pretty severe consequences on having a criminal record. It can prevent you from going into some professions or getting a job to support your family.”

This does not apply to child predators. Coric said, “If you are a 30 year old sexting a 13 year old, I wouldn’t want you to have any availability of any Pretrial Diversionary program because you are someone that society should be protected from and somebody that shouldn’t have an easy out.”

Jeffrey Roy, the State Representative for the 10th Norfolk District of Massachusetts sponsored a bill earlier this year that would change the way teens are punished for sexting.

Roy decided to sponsor the Bill after a police officer from Franklin, Massachusetts came to him about concerns regarding the laws were toward children accused with sending and keeping explicit pictures of themselves or their peers. The police officer explained that if the teenagers were convicted, they would have to register as sex offenders. If put into place, Roy said the bill will, “give police and prosecutors additional tools to make the punishment fit the behavior and further the desire to keep students safe and provide a teachable moment.”

There is much discussion over what to do about sexting and many Americans feel that the current system is punishing teenagers for contradictory reasons. “Laws change all the time,” Coric said. From prohibition in the 1920s to the ban on gay marriage the United States has gone through many legislative changes and the laws on sexting could very well be the next to change for the better.

Gianna Folz is a freshman journalism major who has made “Express yoself” her personal motto. You can email her at gfolz@ithaca.edu.