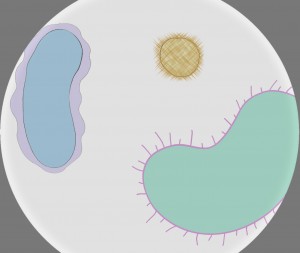 Bacteria are everywhere: our bathrooms, our kitchens, our cell phones and ourselves. Due to the association between these “bugs” and illness, a lot of our cleaning protocols and products are designed to reduce or kill the bacteria present on these surfaces. However, studying which bacteria occupy a given space, including space itself, can provide valuable information on the health, history and demographics of an area. Microbiome surveys, such as the New York-based PathoMap project, aim to give our bacterial neighbors their due.

Microbiome surveys take samples from specified sites to analyze which bacteria are present and in what quantities and ratios. To date, most of these have been done in environmental and medical contexts. For example, an article on Motherboard at the beginning of March 2015 explored the vaginome and how the collection of bacteria housed in the vagina has been linked to a variety of health topics, including how often a woman gets a urinary tract infection or the immune system risks of babies born via C-section. Another article from Mother Jones in November investigated the role of bacteria and fungi in plant function, pointing out that “the very plant-ness of plants” (photosynthesis) comes from an old symbiotic relationship between plants and microbes that could convert solar energy into chemical energy.

Greater surveys have attempted to tackle the microbiomes of entire ecosystems ranging from the human body, inside and out, to the ocean floor and, in one survey deemed as “ludicrous and not feasible,” the entire planet. This last one, the Earth Microbiome Project, began in 2010 to gather existing microbial samples from various environments around the world into one database for comparison.

Until recently, however, most surveys have glanced over the environment in which we spend the most time: inside. Several studies and subsequent ad campaigns show just how “dirty” common surfaces like doorknobs and phones are, but the buildings we occupy (known in the microbiology world as the built environment) also have an established set of bacteria. This set of bacteria changes depending on who is in the space and for how long, and the building materials, including paint and HVAC systems, can change how quickly the building microbiome shifts in response to the new people.

In the past five years, several surveys have been conducted in the built environment, including the Hospital Microbiome Project based out of the University of Chicago and the Home Microbiome Study. Many microbiome surveys share researchers to provide a more collaborative approach to understanding the microbial situation from site to site, and most are part of the Microbiome of the Built Environment Network (microBEnet for short).

MicroBEnet is a project funded by the Alfred P. Sloan Foundation to study and better understand the microbial makeup of the indoor environment from homes and hospitals to office buildings and schools. The project also connects these researchers with each other, researchers in other fields and the greater public to spread awareness of the indoor microbiome, as well as biology in general. David Coil, a project scientist at the University of California, Davis, and a member of the project, said the program started because the Sloan Foundation was interested in biodefense.

“They wanted to develop sensors so that you could go into a building and see if a bioterrorism event is taking place, but what they discovered is that actually we didn’t know anything about what is in buildings,” Coil said. “We spend 90 percent of our time indoors, and we knew more about what lived in a deep-sea ocean vent than about what’s in the average office building.”

Subway systems are part of the built microbiome in large cities, and researchers at the Weill Cornell Medical College in New York City recently published their PathoMap study, which took samples at various subway stations around the city in summer 2013 and analyzed the kinds of bacteria and DNA found. Ebrahim Afshinnekoo, co-lead author on the study, said the subway system was the perfect example of the universal feeling of touching a surface and questioning how dirty that surface was, but the idea was largely uninvestigated.

“What we really wanted to do was create this baseline, see what is on these surfaces, what communities are present, and now that we’ve done that, it opens up doors to interesting ways to take this data and take it further,” Afshinnekoo said.

The survey, which included almost 1,500 samples from 466 stations, identified more than 15,000 kinds of bacteria, viruses, animals, plants and other organisms. About half of the identified organisms were bacteria, most of which are the kinds found on human skin; one subway station that had been closed due to flooding after Superstorm Sandy had traces of bacteria that were only known in Antarctica.

Other organismal DNA found included various insects and rodents found in the subway system, humans and various kinds of vegetables; cucumber DNA occurrences actually outnumbered human DNA results. For Afshinnekoo, the most surprising part of the study was that half of the DNA sequenced from the samples didn’t match any known organism, which means there is a lot more for researchers to discover.

Since this was the baseline study, further studies need to be done to increase accuracy in the genomic results. Some searches on DNA found in the subways matched exotic animals including Tasmanian devils and yaks, and the New York City Department of Health and Mental Hygiene questioned the accuracy of finding bacteria associated with anthrax and the bubonic plague, even in such small amounts. Bystanders to the sampling process sometimes accused the researchers of spreading HIV, principal investigator of PathoMap Dr. Christopher Mason told the Wall Street Journal. The MTA also refused to comment on the findings or sanitation protocol.

The next subway project, MetaSUB, will take place this coming summer in 20 cities around the world, including Boston, Mexico City, London, Beijing and Sydney. The survey aims to compare the microbiomes of subways in cities with varying populations, ridership, number of stations and outdoor environment. Afshinnekoo also said the next New York-based study will look at how the city’s subway microbiome changes throughout the day and throughout the year, using PathoMap as the comparison.

“What we’re really pushing to move forward with, but I guess it’s really a limit of our current technologies, is to have real-time tracking and sampling and even sequencing of these samples,” Afshinnekoo said. “The idea of even the name of PathoMap was that we were creating this pathogen weather map so that you could get an alert on your phone of ‘Hey, you’re going to this station, there’s an outbreak of E. coli or this bacteria and you should wash hands or be careful.’”

Stadiums have also been swabbed for microbiome surveys, but instead of just identifying the bacteria found there, Project MERCCURI sent the samples to the International Space Station to observe how bacteria grow in microgravity conditions. The astronauts also swabbed the ISS to see what kinds of bacteria were already up there, and Coil said the ISS microbiome is a lot like that of a typical house, which is mostly the bacteria found on human skin.

In addition to the research, Coil said the project was also largely to get the public interested in and excited about microbiology. The Science Cheerleaders, an organization of current and former professional cheerleaders who are pursuing science careers, coordinated events at the stadiums with local cheerleading groups to sample surfaces, shoes and phones for bacteria to send up to the ISS.

Summer Wagner, sustaining engineering lab manager at NASA’s Johnson Space Center and a former Houston Texans cheerleader, said Project MERCCURI was her favorite Science Cheerleader project so far. The team did a great job introducing microbiology and the experimentation process to the participants, and it was fun to bring her aerospace engineering expertise to a group that doesn’t normally get to conduct experiments in space.

“It was a tremendous success,” she said. “The citizens that participated are able to say that they were a part of an International Space Station experiment.”

While not every participant in the Science Cheerleaders’ programs can say they sent bacteria to the ISS, outreach programs like this are critical for raising the next generation of scientists, including kids like Wagner who had no exposure to it as a kid.

“The Science Cheerleaders have been all over the nation sharing with citizens many STEM careers that exist and encouraging young people to pursue STEM,” Wagner said. “These messages are important in inspiring younger generations to become innovators.”

“Over much of recent human history, we’ve treated microbes as the enemy,” Coil said. “If we can convey to people that, you know, they’re not all bad and that we just need to learn to live with microbes instead of fighting against them, there’s real value to public health and society in doing that.”

Amanda Hutchinson is a senior journalism major who wants you to know that not all bacteria are bad. You can email her at ahutchi2@ithaca.edu.