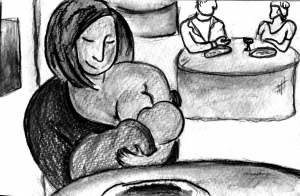 Exposing the public’s fear of breastfeeding

Seventy-nine point two percent of women breastfeed their children for some period of time, while more than 40 percent of women breastfeed their children exclusively for the first three months, according to a 2011 survey conducted by the Centers for Disease Control and Prevention. These statistics imply women are breastfeeding children; however, breastfeeding remains something largely unseen in public places.

Despite the prevalence of breastfeeding, it is not socially acceptable to breastfeed in public places, which has lead to hostile environments for women breaking this cultural norm.

Adrienne Pine, professor of anthropology at American University, became an internet controversy in 2012 after breastfeeding her sick child in front of students during a feminist anthropology lecture.

The situation sparked on-campus debate, with students questioning if Pine’s actions were “natural” or “unprofessional.”

In response to the incident, Pine wrote an online article, “The Dialectics of Breastfeeding on Campus: Exposéing My Breasts on the Internet,” which was published in CounterPunch in September 2012.

“So here’s the story, internet: I fed my sick baby during feminist anthropology class without disrupting the lecture so as to not have to cancel the first day of class,” Pine wrote. “I doubt anyone saw my nipple, because I’m pretty good at covering it. But if they did, they now know that I too, a university professor, like them, have nipples.”

Pine’s article questioned the underlying assumption that breasts and nipples are sexual and rejected the notion that breastfeeding in public should be a newsworthy event.

Martucci said she believes breasts are sexualized within American culture, which contributes to the stigma of breastfeeding.

“Since at least the 1940s, and arguably for the majority of the modern era, there has been discomfort in American society over the dual nature of the female breast as both a source of nourishment and an object of sexual desire,” Martucci said.

Martucci said this relationship between the “sexual breast” and the “nourishing, maternal breast” is that the sexualization of female breasts picked up around the same time that the movement toward breastfeeding started to return.

“Over the first half of the 20th century, breastfeeding rates fell,” she said. “By the 1940s, small pockets of educated, white, middle-class mothers began advocating for breastfeeding, and by 1956 the first breastfeeding support organization, La Leche League, had formed. The WWII and post-war years, however, were also the years when sexual norms shifted in such a way that a lively heterosexual marital sex life became an essential part of a happy marriage, and by extension, a happy nuclear family.”

“I would argue that today the expected norm is to breastfeed at all costs to the mother, especially for the first three months,” Martucci said.

It is actually harder for a woman to choose not to breastfeed today, Martucci said, because it is so pushed by the healthcare system. There is pressure on mothers to breastfeed unless they have a medical condition that doesn’t make breastfeeding feasible.

For example, mothers on Women, Infants, and Children, frequently referred to as WIC, a supplemental nutrition program for women, infants, and children, receive more food and get free breastfeeding support when they breastfeed their babies. In addition, the American Academy of Pediatrics now recommends breastfeeding for a full year.

Martucci said now most women who receive prenatal care in this country are educated about breastfeeding and, now, breastfeeding is considered a basic part of childbirth education classes.

She said she believes public breastfeeding should be considered acceptable, especially because health organizations and the general pubic tell mothers it is the healthiest way to feed their babies.

She said breastfeeding can prove to be more convenient because there is no need to prepare formula.

However, she said societal drawbacks continue to challenge the benefits.

“Alternatively, women who breastfeed must negotiate a society and a body politic that still does not afford women equality with men, and mothers often bear the brunt of this inequality,” Martucci said. “In the case of breastfeeding, women must often make sacrifices of sleep, time, money and personal well-being in order to breastfeed a child.”

Charlotte Robertson is a freshman integrated marketing and communications major who isn’t afraid of nipples. You can email her at crobertson@ithaca.edu.