I’ve been wearing band tees since middle school. Raised on classic rock by my parents, I sported Rolling Stones, Black Sabbath, Led Zeppelin and David Bowie merch almost on a daily basis. I had some friends who wore band tees, too, but for a lot of different bands: Slipknot, Korn, Queens of the Stone Age and the Sex Pistols, to name a few. I’d say band-tee-wearers were a minority in my middle school class; maybe because that’s just how we dressed, but more likely because we few students genuinely liked the music we liked. It wasn’t the conventional thing to do, but the whole hipster complex wasn’t really an issue yet. We were unintentionally a subculture of dress because we liked band tees, not because we thought they made us eclectic.

Maybe this is idealistic of me, but when someone wears a band tee. I like to assume they actually like the band and know enough of the artist’s work to justify wearing the shirt. I was personally petrified of going to school in a band tee that I didn’t feel I earned. Shit, I remember mentally listing every AC/DC song I knew whenever I wore my “For Those About to Rock” shirt to class. I was petrified that someone would ask me to name three tracks on the spot and in the moment I’d forget every song I knew and look like an asshole. 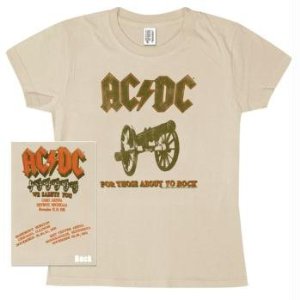 As if this color scheme didn’t make me look like an asshole already.

After my eighth grade crush did in fact ask me that exact question and I answered with confidence, I decided wearing a band tee was not something one should take lightly. If you’re going to spend money on a band tee, you should at least—go figure—listen to and like the band.

It seems to me that more and more young people are wearing band tees these days, featuring all of the same bands. With the exception of the metal heads I spend most of my time with at home and the indie fans I sit next to in class, modern youth seems to be normalizing and conventionalizing the band tee in an attempt to make it “vintage” and “edgy” in nature. While I’m sure some of these tweens and teens actually listen to the bands they’re wearing, I feel it’s safe to assume that many of them don’t. Here are four bands whose merch are being killed by contemporary teens and the popularization of being… unpopular? 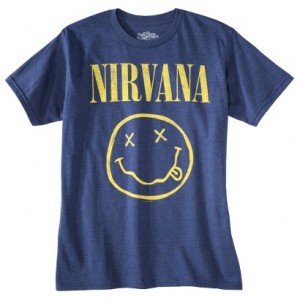 This might be the most heartbreaking shirt on this list. Nirvana is essentially the face of grunge and teenage rebellion. Whether Kurt Cobain would have liked being the face of anything is doubtful, to say the least. But Nirvana shirts being sold at Forever 21 to thirteen-year-old straight-edge kids just seems… not right. Sure, you don’t have to be an angry teen to like Nirvana, but you should at least understand their significance before you wear their logo like a fake Coach wristlet. Say what you want about Nirvana musically, but they had balls and they had purpose—two qualities that are tough to find on today’s radiowaves. Anyone wearing this shirt who thinks being able to mumble along to “Smells Like Teen Spirit” justifies their purchase needs a taste of “In Utero,” or my personal favorite, their MTV Unplugged album. Nirvana is a band with a lot of rage and a lot of pain; don’t take away from their legacy because you think the smiley face would be endearing on your Instagram. 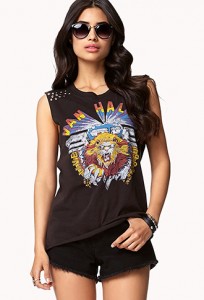 True or False: Wearing sunglasses makes you seem cool yet unapproachable enough so that no one will be brave enough to question your music taste. So do studded shoulders.

These shirts are all over the damn place. While Van Halen is iconic, I am hard-pressed to believe that mass numbers of teeny boppers even know “Jump.” I also wouldn’t call myself a Van Halen fan, but bands deserve credit where credit is due. Van Halen is one of the world’s best selling bands of all time. Metal for their era (perhaps hard rock today), they wrote edgy songs like “Hot For Teacher,” a track that would definitely get ripped apart in today’s day and age for its subject matter and political incorrectness. Eddie Van Halen played the guitar solo on Michael Jackson’s “Beat It.” (http://www.cnn.com/2012/11/30/showbiz/music/van-halen-jackson-thriller/) If MJ asks you to collaborate with him, that’s when you know you’ve fucking made it. Therefore, don’t go wearing a Van Halen shirt as though the band’s purpose was to make you look totally vintage. It’s disrespectful to the art to wear a band’s designs for your style alone without any knowledge of their work. Notice the above shirt is for their “Live 1982” tour? If your parents weren’t even on this tour, you’d best actually listen to Van Halen to get away with this one. 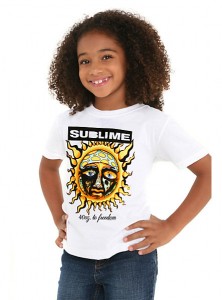 Edgy. Iconic. Trendsetting. The new must-have for your second-grader’s closet.

If you’ve ever smoked weed or fallen off a skateboard, odds are you have at least one Sublime song in your iTunes library. Sublime was a ska-punk band made up of three tattooed dudes from California who sang about pretty much whatever the hell they wanted. For instance, their album “40 Oz. To Freedom” features songs such as “Smoke Two Joints,” “Let’s Go Get Stoned” and “Date Rape.” While I’ve met plenty of real stoners and non-stoners who listen to Sublime, I’m curious how many kids buying their shirts at Hot Topic even know what ska is, or what a pot leaf looks like. Again, that’s not to say that a band’s fan must mimick the band; I’d be doing a lot of fucking drugs to keep up with Jimmy Page alone.

But too often are the masses encouraged to stop truly listening to music for the sake of mainstream media (this is how lyrics like “honey got some boobies like wow, oh, wow” (?http://www.directlyrics.com/usher-oh-my-gosh-lyrics.html) make money). Because bands are morphed from musicians to mere images, a Sublime shirt doesn’t necessarily mean you like Sublime anymore—it might just mean that you want to seem cooler than you actually are. Much like the local Hot Topic that decided to turn on its lights and sell Justin Bieber shirts (R.I.P., old HT that my friends were too scared to go in), alternative music is no longer a refuge for real fans anymore because it’s being marketed to and degraded by everyone else. 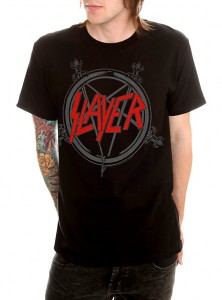 Do teeny-boppers know what a pentagram looks like? Or maybe it’s just an #upsidedownstar?

One of the “Big Four”
In the metal genre, Slayer is legendary. While they’re arguably not as big as Metallica (Metallica is the only band in history to have played on all seven continents, and they did it all in one year… how does that taste, Taylor Swift?), Slayer opened the door for thrashier, dirtier metal bands of today, and arguably the whole of American death metal. Slayer essentially pioneered the evil lyric content of a no-fucks-given metal band in the U.S. with albums such as “Reign in Blood,” “South of Heaven” and “God Hates Us All.” Sure, Metallica tried being creepy making a little kid pray the lord his soul to keep in “Enter Sandman.” That’s cute.

Slayer just fucking goes there: take the lyric “Count the bullet holes in your head” in the song “Mandatory Suicide,” or the lines “Join in my quest to leave life overturned / Spanning the world wave of doom / Spewing our death with the evil I’ve churned / Awaken the dead from their tombs” from “Born of Fire.” These guys were fucking brutal in their time, and honestly still are today. This is why it sucks to see Kendall Jenner in a Slayer tee. If Kendall Jenner actually liked Slayer, then maybe it would be an awesome thing; a mainstream celebrity that teens give a shit about genuinely promoting metal music would be near revolutionary. Tons of star-struck young people would go out and buy Slayer shirts, and because Kendall said Slayer was an awesome band, some of them would listen to their music. If she’s faking it, her fans will still buy the t-shirts—but none of them will care to know what the hell they’re wearing. 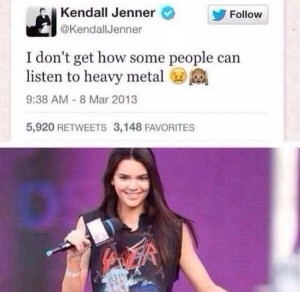