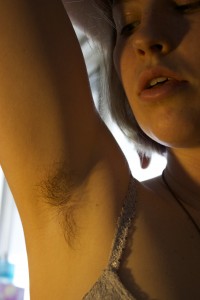 Back in 2010, a study was published in The Journal of Sexual Medicine that looked at how often women shave off their body hair. “Pubic Hair Removal among Women in the United States: Prevalence, Methods, and Characteristics”* asked more than 2,000 women of ages 18 to 68 to take a survey detailing over a period of a month how often they shaved and whether they partially or fully shaved unwanted pubic hair. Only 12 percent of participants in the 18 to 24 age group indicated they did not remove hair using one or more of the method options provided, which were shaving, waxing, laser removal and electrolysis. The study also found that as the age ranges grew, so did the number of women who did not shave.

Looking at media today, in television shows, movies and advertisements, the dominant image of beauty for women is a hairless one. Lisa Wade, associate professor and chair of the sociology department at Occidental College, wrote in her article “Women in Apocalyptic Fiction Shaving Their Armpits” that shows like The Walking Dead, which takes place in a post-zombie apocalyptic world, makes sure their female characters have smooth underarms. Wade said this shows just how averse society is to the idea of a woman with hair in places it naturally grows. But it didn’t used to be like this. Actress Sophia Loren, often considered one of the most beautiful women to have ever lived, did not shave her underarms. Today, however, it is nearly impossible to find a female celebrity open to growing their body hair.

Carla Golden is a professor at Ithaca College and a long-time feminist who teaches a course titled Psychology of Women in the Department of Women and Gender Studies. She said she believes society’s aversion to body hair on women is about fitting into a narrow idea of what is seen as beautiful.

Golden said over the years, feminism has become more mainstream. During second-wave feminism, in the ’60s and ’70s, activists would grow out their body hair and refuse to wear makeup, identifying these beauty practices as part of a system that oppressed women by insisting they would always be beautiful. Golden said feminism is about challenging power relations between women and men. Second-wave activists did this by rejecting the beauty standards that women are still expected to follow. In 1968, second-wave feminists protested at the annual Miss America Pageant in Atlantic City. They created “No More Miss America,” a list of 10 points about the event that they were against. Their very first point critiqued the oppressive practices that the pageant represented. They compared the pageant to a stock show, with animals being judged solely on physical characteristics. According to the document, women are forced to compete against each other daily for male approval, “enslaved by ludicrous ‘beauty’ standards.” Internalized misogyny was part of the system that they rejected, and they saw it displayed in pageants like Miss America.

“There’s an attitude today that if you have a body part that isn’t perfect, you should fix it,” Golden said. “It’s not just that you’re supposed to look your best; it’s like an imperative that you fix yourself if you can.”

One of the easiest ways for women to “fix themselves,” or become closer to the beauty ideal, is to shave off unwanted body hair, she said.

“Subsequent forms of activism have reclaimed femininity, and reclaimed beauty, and made the argument that ‘hey, you can be feminine and beautiful and that doesn’t bear on you being a feminist,’” Golden said about current ideas from the feminist movement.
But Golden also said she doesn’t think these things can be personal choices for self-gratification only.

“If you were to do a survey, I bet 99 percent of women on this campus — I could be wrong — would say that in the summer months they shave,” she said. “When you find something that so many women do, it’s got to be something other than personal preference.”

Compared to second-wave radical feminism, Golden said today’s much tamer version of feminism is the product of commercialism finding young girls to be a new market at which to target products. She said “girl power” promotes the idea that girls are strong, but not necessarily feminists.

“Girl power media culture shrink-wrapped femininity with feminism,” Golden said. “It took second-wave feminism – way, way, way diluted it – and turned it into girl power. Rah-rah, girls are great; girls are strong. And it sold that.”

Golden said the problem with girl power media feminism is that it doesn’t promote this idea for gender equality.

“They don’t quite see that it’s a sexuality focused on being attractive to men, as opposed to ‘What do I like? What’s good for me?’” Golden said.

Breanne Fahs, a professor in the Department of Women’s and Gender Studies at Arizona State University, has conducted several studies about the socialization of body hair removal today. Her piece in Psychology of Women Quarterly, Perilous Patches and Pitstaches: Imagined Versus Lived Experiences of Women’s Body Hair Growth, studies women’s real and imagined ideas of body hair standards. The results of the study suggested that the pervasiveness of body hair removal for women in the United States had transitioned from “an optional form of body modification to a relatively universal expectation” placed upon them.

Rachel Huley, a sophomore Ithaca College student who identifies as a feminist, said she believes shaving is a choice.

Huley performed in the Vagina Monologues on Feb. 15 as a woman coerced into shaving her pubic hair for her husband’s enjoyment, something she’s never done before and does not feel comfortable with. But that’s the character’s view of body hair. Huley, on the other hand, said she prefers to shave, but does not appreciate being told that she should.

“I once was sleeping with this guy and he was like, ‘It’s been a while since you shaved, huh?’ And I was like, ‘Bitch, I only do it during bath time,’” she said.

Her partner then suggested that she could leave a “landing strip.” Instead she chose to grow out her hair and shape it like an arrow.

“The only person that matters on the case of my vagina’s hair is me,” she said. Huley said this particular partner no longer communicates with her.

Although she and the character she played in the Vagina Monologues have different preferences when it comes to body hair, Huley said she can still relate to this monologue.

“She is sassy, but unfortunately succumbs occasionally because she wasn’t sure of her own worth, which I can definitely identify with,” she said. “I do love hair; I love all of the possibilities and the protection, but I find [not shaving] personally uncomfortable.”

Golden said she thinks women today don’t see themselves as enslaved by beauty ideals and they believe they have the freedom to do what they want to their own bodies.

“Hey, this is the legacy of feminism – that we can impose these standards upon ourselves,” she said. “Women have internalized this shit that you have to be beautiful.”

Some men, however, prefer body hair on women. Gary Peebles is a stunt man for television and film, and he said he finds body hair attractive.

“I can never peg why I’m attracted to hair on women, but I can say it’s appealing to my eye, touch,” he said. “I enjoy everything there is to enjoy about it.”

Peebles said he is aware of how against the grain this attraction is.

“I think my opinion about it isn’t popular at all, but I do think it’s a growing one,” he said.
He said from what he has observed online, body positivity has been a growing trend. As for Peebles’ partners, he said only one has had a negative reaction to this unorthodox attraction.

“All others I mentioned it to were often relieved, intrigued, surprised and usually very receptive,” he said. “Generally its always very, very scary to tell them. If a woman thinks her body hair is disgusting, how will she see you if you tell her you think it’s attractive?”

He said his favorite place to see body hair is on a woman’s legs, but he’s not picky.
“I’m appreciative of every active or non-active follicle there is on her because it’s the way she is and the way she’s supposed to be,” Peebles said. “The world has imposed enough on the female body; I’d feel just wrong trying to make specifics in my attraction to it.”

He said he himself does not have a lot of body hair and is very aware of how he fits into the beauty ideal set for men. He said not having body hair doesn’t make him feel any less of a man.

“Hair is neither masculine nor feminine in my opinion,” he said. “It’s human.”

Beauty standards give a different impression, but Golden said she doesn’t expect the beauty ideal will ever go away.

“The best I would hope for would be an expanded definition of what counts as beauty,” she said. 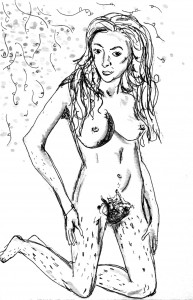 An older study from Fahs, published in the journal Feminism & Psychology in 2011, is titled “Breaking body hair boundaries: Classroom exercises for challenging social constructions of the body and sexuality.” The study is based on an in-class extra-credit assignment she posed to her students. They were asked to engage in non-normative body hair behavior. Male participants would shave their faces, legs and chests. Female participants would not shave anything. After 10 weeks of this non-normative body hair behavior participants wrote reflection papers about their experiences.

“I personally think that growing out body hair is an experience all women should try, in part to see how their bodies are socially controlled but also to reimagine their sense of freedom about their bodies,” Fahs said. “I encourage it as a form of experiencing, not just imagining, gender non-conformity.”

Fahs’ experiment began in 2008 and was inspired by a lengthy discussion of women’s pubic hair removal with a group of all-female students. Three self-identified radical feminists out of the group of 12 offered to try out this social experiment. When the 10 weeks were up, all three reported that they struggled with self-confidence due to the social punishments and social exclusion they faced.

Fahs said she believes part of the reason there is such a strong reaction to body hair is because throughout history it has been associated with power.

All subsequent groups that participated in Fahs’ experiment reported the same negative reactions. When all of the reaction papers were analyzed, Fahs found the disgust with body hair crossed race and class dimensions. This is the reality we face – a society conditioned to dislike certain features with such gumption that it affects even the most confident individual’s self esteem, as Fahs’ students discovered in her study. But Fahs said these classroom studies are about more than just body hair. According to the conclusion of her Perilous Patches study, “Conversations about body hair hold up a mirror to otherwise unseen aspects of gender and sexuality, making the seemingly benign (‘‘fluffy tufts,’’ ‘‘fuzzy patches’’) suddenly endowed with the power to unsettle and transform.”

Jamie Swinnerton is a senior journalism major who is sick of being told what to do with her body hair. You can email her at jswinne1@ithaca.edu.