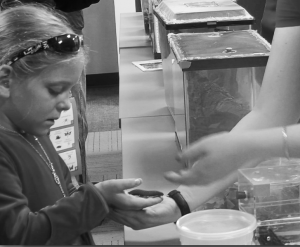 Kids swarmed through the bug origami room, bustling to get to the table to recreate their favorite insect. Patient undergraduate volunteers helped them fold the paper into place while explaining how the bugs functioned in the real world.

This was just one of the many fascinating and informative attractions at Cornell University’s Department of Entomology’s 11th annual Insectapalooza on Oct. 25, a fun-filled day devoted to educating the public about insects. This year, over 1,500 people of all ages and interest levels gathered to learn about how bugs and humans interact.

Laura Harrington, a medical entomologist at Cornell, set up a room with dozens of microscopes and infographics about insects that carry diseases that affect humans, a clear example of the interaction between insects and people.

“This exhibit is about disease vectors, and what we have here are mosquitoes that transmit diseases. We have ticks that are important in transmission of diseases like lyme disease,” she said. “We have lice, human body louse, we have bedbugs, and we also have some different types of ticks that you can see.”

Harrington said she is glad Insectapalooza is a time when the entomology department can interact with the public.

“Well, I think that Insectapalooza really helps people understand how important insects are,” she said. “Whether they’re good or bad insects, they’re very important, and culturally, humans have had a long association with insects.”

The event was just as fun as it was entertaining. Many families with young children were in attendance, and events were created to target the children specifically, including cockroach races (resembling those of hermit crabs) and “Pond-ering Insects,” where kids could use nets to pick up waterborne insects from a supervised kiddie pool. Children were thrilled to see their favorite creatures up close and personal.

Spiders were 7-year-old Matthew Smith’s favorite, he explained, “because they make webs.” His brother Jak Smith, 6, preferred butterflies, “because they don’t bite you or sting you.” Michael Smith, 4, liked ants, but when asked why, responded, “I don’t know!”

Linda Susan Rayor, another Cornell entomology professor, explained because of the over 35 exhibits, the event can appeal to people of all ages. “We’re essentially targeting 3 to 80 years olds at Insectapalooza,” she said.

But it’s more than just fun. It’s a common problem that the incredible research conducted in the science community has trouble getting to the public without being mangled by the media in the middle. For this reason, communicating science is a passion for Rayor, who was the first coordinator of Insectapalooza over a decade ago.

“The idea was that we wanted to be able to promote Cornell Entomology, and I think the real idea was that insects and other arthropods are really charismatic microfauna,” she said, grinning as a vinegaroon (a spider-like creature found in Arizona) scuttled across her hand. “These guys are so cool, and they are unquestionably the dominant animals on Earth. So we thought that we really had the possibility of sharing our information with the public.”

This gets to the root of Insectapalooza. It’s a unique event where, for $3, anyone can come and learn about some of the smallest creatures — oftentimes with the worst reputations — that are a part of our world. Whether someone is an unabashed insect lover or can barely stomach a butterfly, it’s absolutely compelling to see so many people who are so passionate about the same thing and so eager to share that passion.

“Our idea really is to share both the allure of insects but also to communicate the science behind the work that we do, because so much of insects and other arthropods have huge effects on the economy around the world,” Rayor said. She explained this includes a direct impact on the state we live in, right in the forests of central New York.

“So you’ve got insects,” she explained, “that are pests — turns out that New York state is the epicenter of invasive insects in the U.S. and it’s really scary. There are lots and lots of invasive insects that are coming in and doing damage to our crops, waterways, everything else. But at the same time, insects are absolutely key to human food and to pollination of plants around the world. So it’s really really important to be familiar [with] and both appreciate and work against insects.”

Alexa Salvato is a sophomore journalism major who won’t be caught with a fly swatter anytime soon. You can email her at asalvat1@ithaca.edu.