Exploring the freegan fight against overconsumption 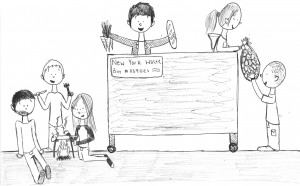 Blow dryers, mini fridges, iPods, safes, shoes. This seemingly random list actually describes items easily found in trash cans and dumpsters around the community — if only people were willing to dig through them.

Molly* and Drew* are students who have taken on the battle of reducing the impact of Ithaca College’s overwhelming overconsumption. At the end of each year, these students scavenge the garbage on campus and in the surrounding area looking for functional items that have been discarded as students move out.

“It’s just sad to see this stuff thrown away,” Drew, a 23-year-old graduate student, said. “There are just piles of things that people don’t want to bring home.”

Molly, a sophomore, was astounded by the amount of excess waste on campus.

What both students were unaware of was that they are part of a much bigger, international movement commonly called freeganism. Freeganism is a movement supporting alternative consumption practices and, in many cases, anti-capitalist ideology. Practicing freegans attempt not to purchase items, finding ways to obtain goods for free or as part of an exchange while engaging as little as possible in the mainstream economy. Those who adapt to this lifestyle choose to dumpster dive, repurpose, barter, garden and share, rather than spending money, even though many who practice similar ideology to the established movement do not self-identify as freeganists.

The Diggers, a San Francisco-based anarchist theater group, have been widely credited for coining the term in the 1960s. The Diggers named themselves after the English Diggers, a utopian group of agrarian socialists from the 1800s that desired a society without land ownership or commercial exchange.

Iryna Pentina, professor of marketing and international business at the University of Toledo and Clinton Amos, assistant professor at Hull College of Business, described the freegan mantra in their research paper, The Freegan Phenomenon: anti-consumption or consumer resistance?

“Freegans envision a future based on self-sufficient, sustainable communities,where we obtain vital resources in ways that don’t exploit people, animals, and the earth and share them freely to ensure that everyone’s needs are met,” Pentina and Amos wrote.

This freeganist philosophy is typically created on an individual level, with each practicing member deciding how their lifestyle encompasses the movement’s values. Some freegans may not incorporate dumpster diving into their daily lives, but instead maintain their own garden. Some freeganists are also more politically motivated than others.

“Public interest towards illegal trespassing and taboo-defying ‘garbage eating’ is especially strong when these activities are performed for reasons other than dire poverty,” Pentina and Amos wrote.

Despite the public perception of dumpster diving as a radical act, many who take part in trash picking may see it as a way to counter the increasing global waste problem.
The average person in the U.S. generates 4.3 pounds of waste per day, according to Duke University’s Center for Sustainability & Commerce. That equates to 220 million tons of waste per year, with 55 percent of that waste sent to one of more than 3,500 landfills.

U.S. consumption statistics are growing at a staggering rate, yet efforts by members of the freegan movement to decrease that waste are greatly hindered by law enforcement and public perceptions. For example, dumpster divers often run into legal trouble throughout much of the U.S.

Although dumpster diving may not be expressly prohibited by law, the practice often conflicts with trespassing or invasion of privacy laws. The general consensus is that dumpster diving on private property is illegal; this includes academic campuses.

“At the end of the year at towers there’s usually 20-foot dumpster bins and officers will drive by and tell you to get out of them,” Drew said.

Dumpster diving remains illegal on other forms of private property, including grocery stores, despite an estimation by the USDA that $15 billion worth of fruits and vegetables are tossed out each year by supermarkets.

There’s no easy fix to the environmental and socio-economic repercussions of overconsumption, but subcultures and social movements like freeganism are working to reduce consumerism.

“I’ve seen what people have thrown out and what is in the trash,” Drew said. “Often what I would already buy is already in the garbage. You learn so much about people and culture by looking at what is thrown out. It shows what is valued by society.”

*Names have been changed to protect the identities of sources.

Charlotte Robertson is a freshman integrated markeing communication major with one eye on your neighborhood dumpster. Email her at crobertson@ ithaca.edu.