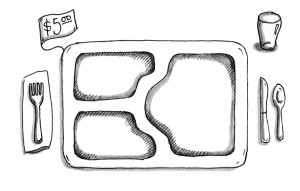 The politics of correctional nutrition

Roughly one in every 100 adults in the U.S. is incarcerated. For the 99 percent on the outside, jails and prisons are hidden and enigmatic. Movies and TV dramas about prison life are popular, showing that people want to know what really goes on behind bars: the alliances, the punishments, and, of course, the food.

Contrary to the common media cliché, prison food is not just bread and water. According to the September menu at the Tompkins County Jail in Ithaca, presented by Melissa Ike, a kitchen employee at the institution, there is a three-week rotation of set meals that add up to a 2,000 calorie daily amount. Breakfasts at the jail include cereal, waffles, milk, juices and fruit. Lunches range from hamburgers with fries to baked chicken with rice. Dinner usually involves a sandwich, soup and dessert. Both lunch and dinner include one serving of fruit and one vegetable. Meals tend to be heavy on bread products, which may have reasons beyond budgetary concerns.

Large diets don’t only make prisoners less volatile, they can also be part of the rehabilitative process for inmates with health concerns due to low socioeconomic status or high drug use, according to Ray Bunce, administrator at the Tompkins County Jail.

“We get all kinds of people here. Many have an addiction issue and may not be on a good diet,” Bunce said. “Part of what corrections does is health care to get them back on their
feet.”

Another form of rehabilitation for inmates in Tompkins County is the jail’s garden, where inmates can grow cucumbers, tomatoes, squash, green beans, peas and herbs.

“The garden program started last year and so far it’s been a success,” Bunce said. “It’s really rewarding to the inmates to see something productive come of their time.”

The fresh crops supplement meals, providing variety and a bit of relief for the jail’s tight food budget. The kitchen’s budget is $168,000 per year, Bunce said. That’s less than $5 daily for each person’s meals, including the guards, who eat the same food as the inmates. The lack of monetary resources leaves hardly any room for food that isn’t processed or bought in bulk.

In the 1990s, restricted budgets also led to some distasteful meals. Charles Sabba, who formerly worked in food service and as a corrections officer at the Federal Correctional Institution in Fairton, New Jersey, said, “The only bad food that was being served was the leftover Desert Storm rations that the military sent to all the prisons.”

These preservative-filled, canned rations of semi-perishable meats and vegetables were unpalatable.

“[The government] didn’t want to waste money and throw it out, so they fed it to the inmates — at least, they tried to,” Sabba said. “The inmates refused to eat that stuff.”
Budgetary concerns aren’t the only reason inmates often end up with innutritious, bland meals.

“There’s a sentiment that inmates shouldn’t have any frills, but your punishment is the time you’re doing, and the lack of freedom and privacy,” Laskowitz said. “There shouldn’t be further punishment by the food.”

The concept of “lesser eligibility” is what drives the notion that prisoners deserve fewer privileges than people on the outside.

“Especially in rural and poverty- stricken areas, where prisons tend to be located, people are quick to say ‘hold back on them, they did a crime,’” Laskowitz said. “But why not make things better for people on the outside instead of making things worse for people who are incarcerated?”

The quality of prison food is only as high as taxpayers allow it to be. As voters constantly look for cheaper ways to handle incarcerated populations, the jail’s ability to create a livable environment for inmates goes down.

“How people think about food both in and outside jails shows a lot about a culture,” Laskowitz said.

In American culture, there’s less focus on rehabilitation that on punishment. In prisons where inmates receive poorer nutrition than those at Tompkins County Jail and FCI Fairton, the food is bad because our culture enforces diminished quality for those on the inside. Improving food for inmates requires recognition of their humanity and a willingness to pay for a reasonable standard of living. Until then, it’s white bread and canned vegetables.

Sabina Leybold is a sophomore speech pathology major who’s doing her time with a pen. Email her at sleybol1@ithaca.edu.