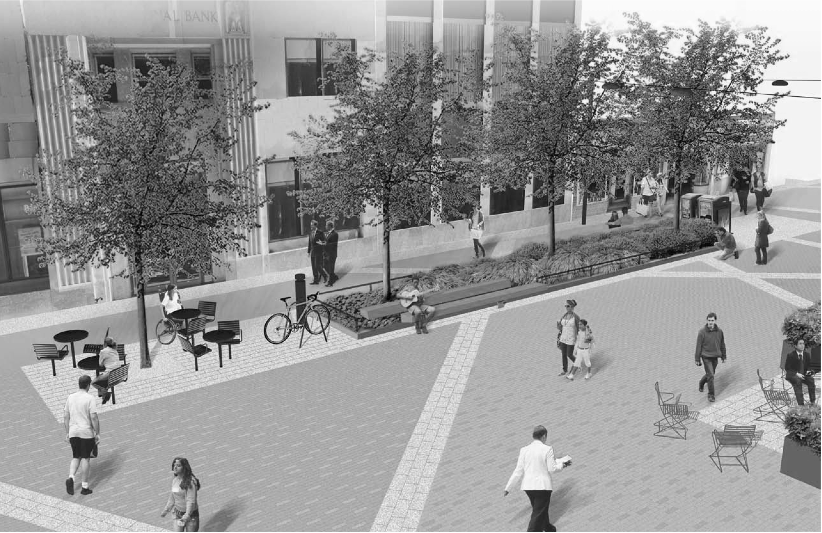 Image by Sasaki from their September 2012 Common Council Presentation

Breaking down construction on the Commons

The current state of the Ithaca Commons brings to question whether the outcome of reconstruction will be worth the cost and time spent with the area in disarray.

Work on the $11.4 million reconstruction project began April 15 and will continue through to the week of Thanksgiving according to project manager Michael Kuo.

“We set out to avoid high-retail season in respect for the businesses,” Kuo said.

Susan Titus and Matthew Peterson, workers at the Titus Gallery on The Commons, have been against the new plan from the start.
“I don’t like their plan,” Peterson said. “It looks like something out of ‘The Jetsons.’”

Adam Chafee at Sammy’s Pizzeria on The Commons said that since construction started fewer people have been coming in.
Titus believes that the obstructions are affecting her business as well.

“It’s been five years since the start of the recession,” she said. “We are not ready for this.”

According to the 2013 budget presentation from Svante Myrick, mayor of Ithaca, the city has had a multi-million dollar budget deficit for five years in a row. This brings to question whether the timing of reconstruction project was right.
Despite opposition, Titus is remaining hopeful that the outcome will leave a more beautiful Commons.

“We did need a new surface,” she said.
The surface is not the only piece being renovated in the project. Boston-based design firm Sasaki Associates created a 75-page plan for the reconstruction that illustrates many details of the project.

The majority of trees have been removed from The Commons area in the demolition process and most of the surface has been removed.

“We received an unexpected number of compliments after the trees were removed,” Kuo said.

He said that after the canopy was gone, it opened up gorgeous views to the surrounding hills and let in significantly more sunlight. The old trees also proved to be a fire hazard and were an obstacle to firefighters who needed to reach higher fires on The Commons.

According to the plans, electrical wiring, water pipes and storm drains will be moved to the middle of the street where there will be removable paving for easier access in the event that reparations or replacements are required.
Most of this has been completed, with storm sewer work being the only piece left to tackle before construction ends in November.

Construction is set to begin again around March 1, 2014 depending on the weather.

Between the start and the projected date of completion, July 31, 2014, there are several pieces that need to be finished including planting and replanting trees, laying the new surface, installing new childrens’ play equipment and adding a new fountain on Bank Alley.

The fountain may be one of the most interesting new features of the reconstruction. It is modeled after the flow of gorges and also has an area that has mist jets to cool pedestrians off on hot days. Bank Alley will also have a new stage for public performances and speakers.

Lighting will be replaced with LED light poles and suspended lights crisscrossing over The Commons and new electric outlets will be available to the public.

“I know when it finishes it will be a lot better,” Chafee said.

Plans and weekly construction updates are available to anyone online at ithacacommons.info.