Home Issues This Land is Your Land
IssuesLocalMagazineUpfrontweb-featured

This Land is Your Land 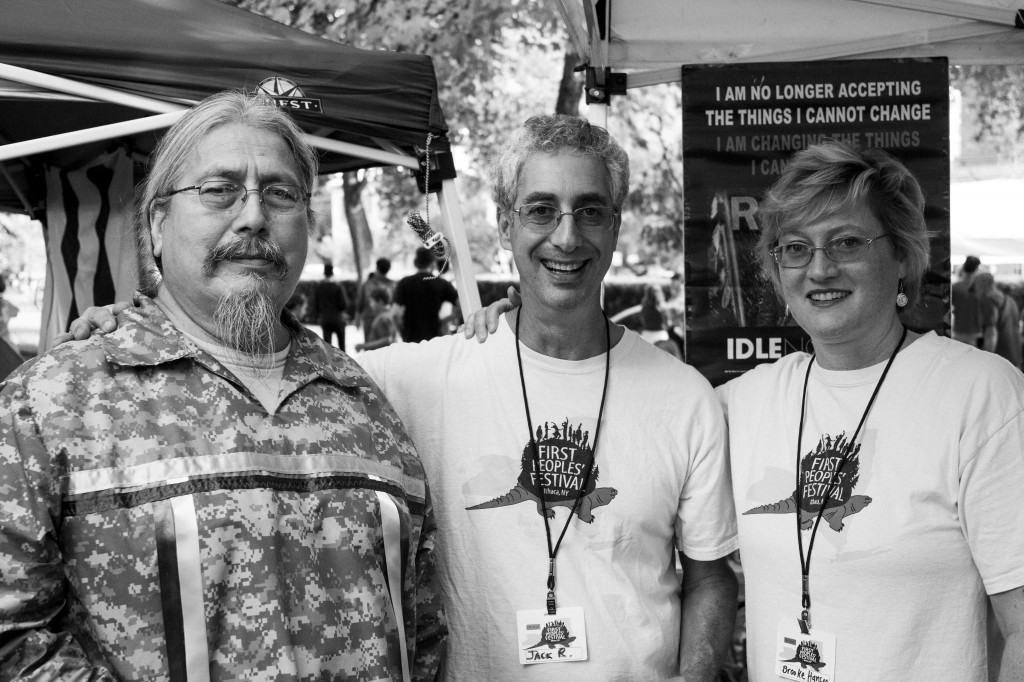 “Birdie, it’s time to come home,” Brooke Hansen, associate professor and chair of the anthropology department, said to Huron Clan, Cayuga Nation Mother Birdie Hill in 2005. It was the first time the Cayuga people would have the opportunity to live on and own their ancestral land in over 200 years due to the work of the Strengthening Haudenosaunee-American Relations Through Education organization.
The first thing Birdie did when she arrived at the SHARE farm was plant the “three sisters,” corn, beans and squash in traditional mounds. As she was planting the seeds, tears streamed down her face and into the mounds, and volunteers asked her if she was okay.

“She [Birdie] said, ‘Yes, I am fine, but this is the first time in 200 years that Cayuga hands have pushed corn into Mother Earth,’” Hansen said.

Before the SHARE farm was established, the Cayugas were the only members of the Haudenosaunee Confederacy not to own their own land. The five other member tribes, Mohawk, Oneida, Tuscarora, Seneca and Onondaga, own land in New York, Canada, Oklahoma and Wisconsin, even though all five nations’ ancestral roots are in Western New York. The other nations own thousands of acres of land, opposed to the Cayugas’ 70 acres. As of 1995 there were only 448 Cayugas living in New York out of the 16,754 members of the Haudenosaunee Confederacy. Information collected after 1995 could not be found.

This process of the Cayugas coming home started when Birdie told Hansen that people should learn about what happened to the Cayugas the Ithaca area.

In 1779, during the revolutionary war, George Washington tasked Maj. Gen. John Sullivan with a campaign for the the “total destruction and devestation” of the Six Nations. The soldiers burned crops, destroyed homes and followed a scorched earth campaign throughout what is now Pennsylvania and central New York. The Cayugas, as well as other members of the Haudenosaunee Native Americans, were dispersed from their ancestral lands.

The Treaty of Canandaigua was signed in 1794 between the sachems of the Six Nations of the Iroquois Confederacy and Cl. Timothy Pickering, who was representing President Washington to give the Cayugas 64,000 acres of their land back. However, New York state did not recognize the treaty, and the land was never returned.

Hansen also co-founded SHARE, which bought the 70-acre organic farm in 2001. To pay off the mortgage of the farm the organization fundraised for four years by selling vegetables at the Ithaca Farmer’s Market, handing out pamphlets and reaching out to anyone they could for donations. Hansen and Jack Rossen, professor of anthropology, even followed musician Dave Matthews to the Bahamas to try and reach out to him for donations. Unfortunately their efforts were thwarted by a strong tropical cyclone.

Even with their fundraising efforts, they were unable to raise the $250,000 goal, so they reached out to Clan Chief Sidney Hill of the Onondaga tribe for the remaining funds. When the farm was completely paid for, ownership was transferred to the Cayuga Nation of New York.
According to Hansen, SHARE’s fundraising process evoked negative emotions throughout the Ithaca area from people that did not want the Cayugas in the community, Hansen said.  Racism and discrimination were present throughout the area and many hate-signs sprung up throughout Ithaca and along Cayuga Lake, including two billboard-size signs on either side of the farm. To combat the racism and the Upstate Citizens for Equality Native American hate group, members of SHARE invited community members to the farm to share with them their culture and establish relationships with them.  Hansen said once people met the Cayugas the members of UCE changed their attitudes. After learning from them and interacting with them, the UCE members did not understand why they had been discriminating against the Cayugas.

“There are changes, but its gradual,” said Rossen. “You may not see it year to year, but over the course of 15 years we can definitely see the changes in the way people’s attitudes are.”

In 2005, Dan Hill was the first Cayuga tribe member to move onto the farm and he is still its caretaker. He holds work-days during important times of the year. Volunteers come from the community, as well as colleges, including Ithaca College, Wells College, SUNY-Cortland, the Finger Lakes Institute and Cornell University. The idea is to have allies and natives work together, establish relationships, and learn about the communities and the environment, Hansen said.

“There is a lot of interaction… I learned that you don’t know who is on the other side of the table,” Hill said. “Someone over there may be someone who can make a decision that will affect a thousand people, two thousand people.”

On Oct. 5 the Cayugas helped with the First Peoples’ Festival at Dewitt Park in Ithaca, which offered traditional Native American food, arts and crafts, children’s activities and performances. One of the performances was by Hill who played the flute. The Cayugas also normally host a Thanksgiving dinner on the farm in November for students that can not go home for the holiday, Hill said.
Junior Matthew Brooks was exposed to the SHARE farm through Hansen’s medical anthropology class last Spring. His interest was sparked, and he chose to participate in a service learning class where he went to the farm to help. A couple activities he participated in included planting raspberries and digging up tree stumps.

“Being there, they’re just always so inviting,” Brooks said. “You know they’re always willing and happy to talk to you about their history and their culture and everything like that. They’re just a great people to be around.”

Brooks also participated in an initiative that began in part because of the SHARE farm: The Two Row Wampum Renewal Campaign is an ongoing effort to promote peace, friendship and a sustainable future for the Six Nations. To celebrate the 400th anniversary of the Two Row Wampum treaty, the campaign organized a month of events. The festivities started with a paddle from Stewart Park in Ithaca up Cayuga Lake to the SHARE Farm where there was a picnic. The paddling continued at Onondaga Lake Park to Albany and finally New York City to attend the United Nations on Aug. 9 where people from Holland met the paddlers. The campaign involved Cayugas, Onondagas, Unity Riders from Canada and Europeans. Brooks said the campaign was a “transformative experience.”

The Two Row Wampum campaign is about creating relationships between the Native Americans and other community members and establishing a better understanding of the culture. The campaign was made possible by the first initiative with Birdie wanting education and understanding, which led to establishing the SHARE farm and the events that have followed.

The SHARE farm is unique in the Ithaca community because many other Native American communities are established on reservations, land allocated by the government, or have had long established communities. The SHARE farm is new in the scope of the Cayuga’s history, but its significance in their history connects back 200 years and will leave a lasting impact on the Cayuga community, as well as the Ithaca community.

“The SHARE farm was a symbolic coalescing point for many of these other initiatives to take place,” Hansen said.
_________________________________
Taylor Barker is a sophomore journalism major who loves sharing farms, not cookies. Email her at tbarker2@ithaca.edu