A twin’s perspective on sibling contention 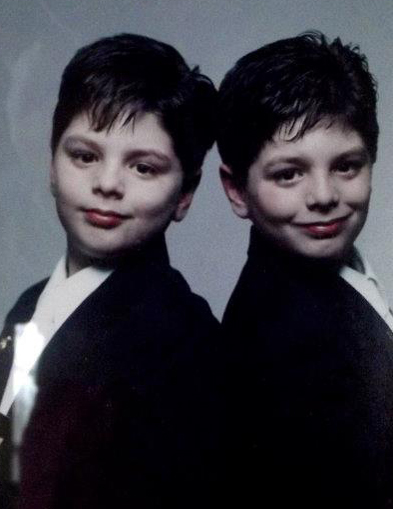 Chris and his twin brother Steve at age 6

Instinctively I turn around despite the fact that my name is, and always has been, Chris.

Masking my distaste with a plastered-on grin, I correct this unknowingly mistaken peer of mine.

“Oh, sorry, man.  I thought you were your brother.  You guys look exactly alike.”

Smiling through clenched teeth, I manage to grit out a begrudging “Don’t worry about it”, my tone dripping with the saccharine sincerity learned from years of waiting tables.

Chris and Steve.  Steve and Chris.  Like white on rice, we’ve been inseparable our whole lives. That is until we parted ways for college.

Here is where I thought the comparisons would end.  The fact that we were both studying music was of little concern to me.  We would be in different states, let alone schools.  Yet, the world of vocal performance is a small and competitive one, and if anything, it only enhanced the rivalry I felt between my brother and I.

Undeniably this causes some issues, but it also has its perks in that we can give each other help and advice when needed. Sometimes it feels like nothing has changed and he is still my other half. The days of speaking in our own language, a phenomenon known as “cryptophasia” according to TWINS Magazine but unjustly named “Stephen-ese” in our household because “Chris-ese” just didn’t roll off the tongue as nicely, have been replaced with a musical vernacular. But then, when I’m sitting in the pub and overhear someone shout to their friend Steve, I distinctly notice my lack of a reflex, and it strikes me that he is not here, and that I am slowly becoming a larger and larger fraction than just one half.

Sibling rivalry is no new concept, but it is undoubtedly on the rise. According to The New York Times, the incidence of twin births has been on the rise since, with one in every 30 births in the US being twins, a 76 percent increase.

Yet, coming in to your own as a twin can be an exhilarating and liberating thing, but it also comes along with its own set of baggage.  Especially when school vacations turn into catch-up sessions filled with slanting judgments and not-so-passive rivalries.

It is difficult enough in the world of vocal performance, constantly being thrown into competition with your friends, let alone having a talented brother at a top-notch conservatory constantly lingering in the back of your mind as you practice. As we get older and the work we are both producing gets more and more complex it is near impossible to not notice the tiny differences and flaws between us. That kind of critical analysis is what we are trained to notice in nearly every music class.

Unsurprisingly, it didn’t even take a full year for the conflict to heat up. Winter break of freshman year I came home to a surprisingly antagonistic brother and a house full of the most deliciously homemade food I had ever tasted.

As I stepped through the door I realized that my loud Long Island mother had become a beautiful angel in only the way a mother can after your first semester away from home. As Petey looked up at me with his big brown eyes, I couldn’t resist getting down on the floor with him and wrestling until I stunk of dog dander and saliva.

It wasn’t until after dinner that Steve started digging into me about what repertoire I had been working on for the semester. As I listed off what I considered to be a fairly substantial set of songs he preceded to roll his eyes and chuckle at the mention of various compositions. I looked at Petey, looked back at him, looked at Petey again and when he dodged my glance the second time I smacked both of my hands down on the dark wooden table, letting out a ring that shook each dirty utensil. Quickly the shouting began and soon enough Steve had picked up a math textbook from the table and was swinging it at my head. The sheer power of my ire and a finely honed defensive reflex caused my leg to burst into a spontaneous roundhouse kick that hit him smack dab in the face and sent him to the floor.

It took me a second to see the stream of dark blood running out of his nose onto the carpet. He looked up at me, held his hand to his nose and said with a perplexed grin, “Get the Resolve or mom is gonna kill us.”

Luckily for us the line had been drawn in the sand within a semester of starting school; we will fight, and we will compete, but it will take more than a kick to the face and a carpet covered in blood to come between us.

Christopher D’Amico is a junior vocal performance major who should not be bothered unless you want a roundhouse kick to the face (poor Steve). Email him at cdamico1[at]ithaca[dot]edu.