Home IssuesGalaxy Victory With a Grain of Salt
GalaxyNews & Views

Victory With a Grain of Salt 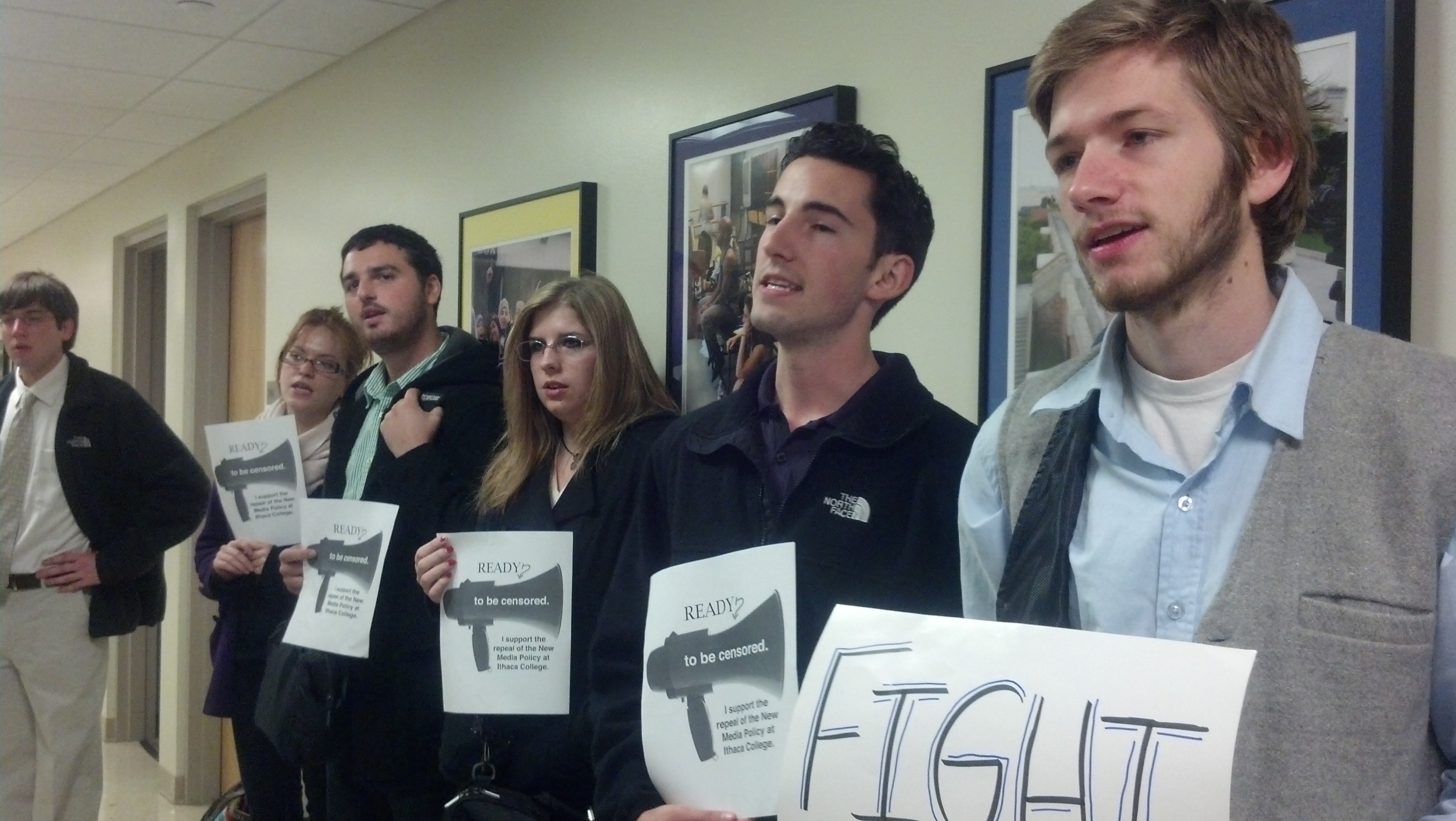 The campus community seemed to breathe a sigh of relief Nov. 13 with the announcement that the media policy instituted on Oct.1 had been rescinded.

While there is a widespread feeling of gratitude that the administration responded to the backlash, the sudden and short-lived policy has stirred lingering questions regarding how such a broad policy could be instituted with such little explanation or discussion as to why.

Kelsey O’Connor, senior journalism major and editor in chief of The Ithacan, said the media policy came as a surprise. While the administration claimed that the policy was aimed to direct student reporters to the proper sources for the convenience of both the source and the reporter, O’Connor said there were no related incidents brought to her attention prior to the policy’s implementation.

“That’s what really surprised me, was the fact that there was no consultation before the policy,” O’Connor said.

Members of the campus community — including but not limited to student journalists — criticized the policy and made calls for its repeal through a letter signed by faculty and staff, a Student Government Association referendum, and a student-organized on-campus protest that culminated with a sit-in in the Peggy Ryan Williams building.

Student leaders hope the policy’s sudden, unexplainable implementation has taken the form of a wake-up call for students to take interest and form responses to the process in which college policies are created.

Ayla Ferrone, a senior journalism major and one of the organizers of the protest, said she feels the students were left out of the conversation preceding the policy, and that the demonstration was a way to engage the administration.

“We felt that we needed something where, not only Park students who felt like this was a violation of their education, but also students from other schools, could get involved and really come together as a school of community and present that to the administration,” Ferrone said.

Rob Flaherty, senior television-radio and politics double major and president of the SGA, said the response to the media policy is the first time he has seen people from all areas of campus come together in the face of a college policy, which he attributes to both the lack of student input in the decision process and the palpable effects of this particular policy.

He hopes the media policy has lit a spark that has gotten the student body to realize the importance of their opinions on college policy.

“Seeing people get fired up about that was good, and I hope that in the future the student body gets active, gets engaged, and continues to be effective in lobbying,” Flaherty said.

On the day the policy was rescinded, President Tom Rochon told The Ithacan that his discussions with student media leaders following the policy’s implementation had a greater role in his decision to rescind the policy than the student and faculty activism.

But the visibility afforded by the protests and petitions no doubt helped bring light to the widespread criticism.

O’Connor said she was surprised by the all-campus response, but that the suddenness of the policy seemed to worry people.

“If the community response really shows anything it’s that they don’t take new policies lightly, you know?” O’Connor said. “I thought that was really the most interesting, or the greatest part of this entire media policy is the fact that the students faculty staff all really came together in such huge way that I’ve certainly never seen since I’ve been on campus.”

Many forms of discussion seemed to follow the implementation of the policy and its backlash, including a panel held by the Ithaca College chapter of the Society of Professional Journalists and closed meetings between the administration and student media leaders. But it seems that more of this discourse should have occurred prior to the policy’s implementation and its lacking hints at a break in communication between the administration and the people whom the policies affect.

President Rochon declined to be interviewed for this article.

Hopefully, the media policy, its response and its eventual rescindment will continue to serve as an example of not only a victory at the hands of community engagement, but as a reason for all members of the campus community to continue questioning and if necessary, criticizing, the value of their input in the administration’s decisions.

Gena Mangiaratti is a senior journalism major who is ready to be a watchdog for student journalism. Email her at gmangia1[at]ithaca[dot]edu