May the Odds Be Ever in Her Favor 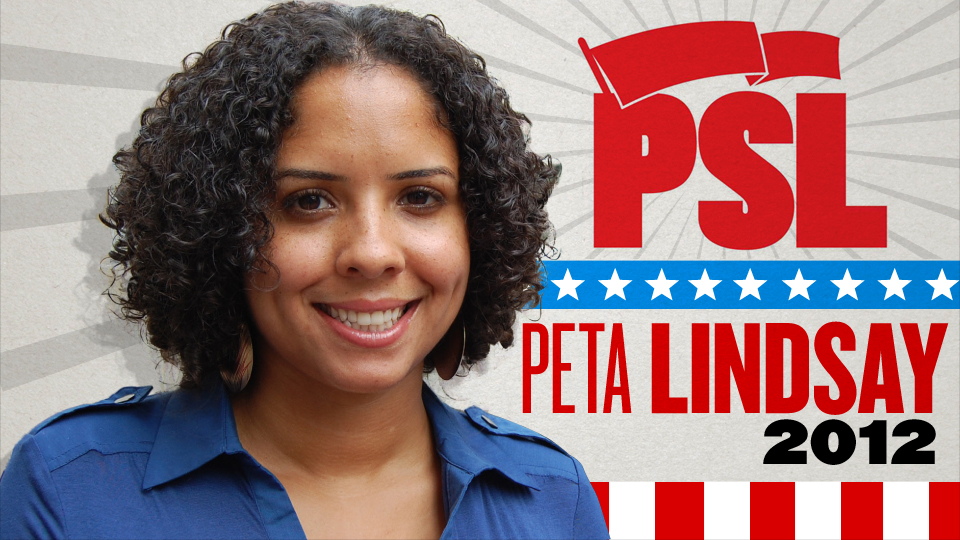 While President Barack Obama and GOP presidential candidate Mitt Romney were preparing for their second debate on Oct. 16 at Hofstra University, 28-year-old Peta Lindsay, the presidential candidate for the socialist and liberation party, was bringing her message and campaign to the lecture halls of Ithaca College.

For the past two months she has been campaigning at colleges and high schools in California, Washington and the Southwest as well as the Midwest, New England and New York. Because she doesn’t have $2 million, or financial support from banks or corporations to get on the ballot across the US, Lindsay is only on the ballot in 13 states, including Arkansas, Colorado, Florida, Iowa, Louisiana, Minnesota, New Jersey, New York, Rhode Island, Utah, Vermont, Washington and Wisconsin. She also has write-in status in Connecticut.

“It’s funny because they say that anybody can be president, but when you actually run for president, you realize how untrue that actually is,” Lindsay said.

At 28 years old, Lindsay is not constitutionally viable to be President of the United States; the founding fathers outlined in Article 2, Section 1 of the Constitution that the president must be at least 35 years old to qualify.

“They’re saying wait until 18 to vote and wait until you’re 35 to run, but we’re saying, don’t wait to struggle. Struggle now,” Lindsay said.

With the average age of congressional members who can call for war at 60 and the average age of soldiers who fight at 19, Lindsay said she doesn’t feel represented by the current political system, which closes the presidential debates from third party candidates like herself.  In fact, according to a poll by Helium, most Americans don’t feel represented by the American political system.

“This president isn’t our president,” Lindsay said. “He is the president of this empire. His job is to make sure U.S. capitalism is on top and Afghanistan is the key in controlling an oil rich region.”
As one of the founding members of the socialist and liberation party, her goal is to spread her 10-point program, which includes ending the war in Afghanistan as well as bringing all the troops home. She also supports making universal health care, education, jobs and affordable housing constitutional rights.

“There’s a reason that we’re kept out of these debates,” she said. “Because I firmly believe that if we were given those platforms, that if we were on all the major broadcast stations, that if millions of people actually heard that there was a presidential candidate who was calling for the immediate cancellation of all student loan debt, I believe there would be a million more socialists overnight.”
Sophomore Nick LeClair said Lindsay’s platform to cancel student debt really resonated with him.

“Just being a student with $45,000 of student debt after this year, that was one of the things that I was always focusing on. I wasn’t sure that I could stay in college after this year,” he said.

Lindsay’s 10-point program also extends to ensure that women can have free, safe and legal abortions; that anti-immigration laws are abolished; and that same-sex marriages are a federal right.
Lily Weiner, community liaison for IC Feminists, the organization that hosted Lindsay’s speech at the college, said although President Obama also supports women reproductive rights and gay rights, Lindsay’s foreign policy of stopping warfare spoke to her.

“I was just looking for a candidate with the same sort of values I have about our imperialistic drives in other countries,” Weiner said.

Not only does Lindsay question why the mainstream presidential candidates don’t talk about the environment or poverty, but Lindsay also criticizes how the debates are conducted.

“What was the big story of the first debate? Was it poverty or skyrocketing tuition? Health care services being slashed to save local budgets? No. The big story after their first debate was their mannerisms, their demeanor. Romney was so lively and aggressive, Obama seemed so down.”

For Lindsay, running a presidential campaign is about changing social discourse and organizing people to protest for an alternative.

“For us, it’s about entering in (presidential campaigns) in order to expose them,” she said. “We’re entering them to let people know that this is a sham , and this is not how we’re getting real change. But the priority for us is to meet people where they’re at. People are thinking about the elections and we’ll talk to them about the elections.”