A Word of Mouth Revolution 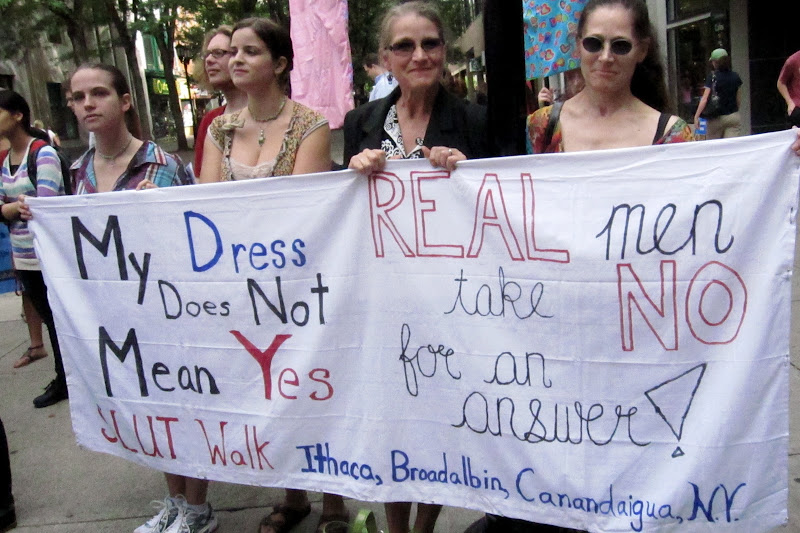 In January 2011, SlutWalk Toronto was established in response to a police officer’s comment that “women should avoid dressing like sluts in order not to be victimized.” Since then, women and men across the world have marched in support of all people who are victimized, slut-shamed or abused.

Slut is not the only word that receives this range of strong opinions on its use. The word “bitch,” which is defined as a “female dog,” is used to describe disagreeable women. Some people think that these words, as well as others, are acceptable to use in everyday life and should be reclaimed as symbols of empowerment. Others find the words derogatory and inappropriate, no matter the context in which they are used.

Grace Woodward, president of Ithaca College Feminists, strongly disagrees with the use of this language. She first started rethinking the use of the word “bitch” when she took a course about women’s lives.

“I couldn’t think of the male equivalent of the word,” Woodward said. “I also felt that it perpetuated this idea that if women are ever anything besides happy or submissive or pleasant, that it’s wrong.”

Woodward said she used to use the word “slut,” but within the past year has made a conscious effort not to use any language that would offend people. Woodward thinks that words of this type are hurtful and not usually taken in a positive light.

“I think that women face a lot of shame for a lot of things and they just don’t need another thing to be upset about,” she said.

Woodward believes reclaiming words like “bitch” or “slut” doesn’t work because of the cultural meaning placed behind them. She said that although some people may think of a word as empowering, others do not see it in the same context and therefore any word that is considered offensive should not be used at all.

She said the use of these words comes from a societal discomfort with women who step outside their gender norms, especially in terms of sexual activity.

“That these derogatory words are so accepted and that people actually try to debate the use of them I think shows that there just isn’t really enough support for women to be independent and confident and sexual and angry,” Woodward said.

She said people should consider the reason why they think it is OK to use this hurtful language toward women. If there is no clear reason why these words are acceptable, Woodward said the best thing to do is simply stop using them.

Alison Turkos was an organizer of SlutWalk New York City, which splintered because many participants disapproved of the event’s title. Turkos thinks that many people in our society have mixed feelings about this language because the words have changing definitions.

Turkos perceives these words as a response to people who are confident about their sexuality.

“If you are a confident person in this society, specifically when it comes to sex, we automatically just shrivel up and don’t know what to do,” Turkos said. “Then we just project that uncomfortableness onto that person, and by doing that we then just proceed to make them want to feel uncomfortable.”

Turkos finds the use of these words unique to each person’s individual definitions.

Turkos believes that the more these words are said, the more they become accepted and normal in our society, whether the effect of their usage is positive or negative. She said that she identifies as a feminist and is reclaiming that word, but many people will never identify with it or think it is acceptable. So in terms of other words like “bitch” and “whore,” Turkos fully supports people in their decision to reclaim them or not.

Turkos said there is a large connection between our language toward women and the society in which we live, and that as part of a patriarchal and misogynistic society, we perpetuate a rape culture.

She said that because people react to these words differently, you cannot just assume that everyone is fine with their use. For example, they can be a trigger for people who have survived sexual assault or domestic violence.

“We really need to be able to seek consent when it comes to anything involving your language, how people choose to speak to each other,” Turkos said. “I think it obviously comes from education.”

Andi Zeisler is the co-founder and editorial/creative director of Bitch Magazine. She said the idea of calling her magazine Bitch came from the idea that by speaking out through their magazine, she and co-founder Lisa Jervis would call themselves “bitches” and embrace it before anyone could call them that first.

“We were very much inspired by the kind of gay activism around the AIDS crisis in the late ’80s and the reclamation of the word ‘queer’ that came along with that,” Zeisler said. “We thought that was a real language reclamation success story and we felt pretty inspired to do something like that, if possible, with the word ‘bitch.’”

The magazine was started in 1996 and it initially received and still sees a good amount of backlash for its name. People have called to complain that they found it inappropriate, especially when seeing it in grocery stores.

“When someone’s in that mindset, they don’t really want to hear about a mission-driven, home-profit organization that’s going to reclaim feminism,” Zeisler said. “So it can be really difficult.”

A lot of women also did not appreciate the fact that the magazine promoted feminism under a historically derogatory term.

“It can be sort of upsetting when they see a magazine that purports to be about feminism embracing that term,” Zeisler said. “I think that’s definitely contradiction that we’ve had to sort of speak to and that we’ve had to respect that not everyone is going to embrace.”

She said reclamation of words such as “bitch” is an extremely worthy cause because it takes the insult out of them. However, it is difficult to separate the societal definition from any one’s personal definition.

“Just because something is acceptable in pop culture doesn’t mean that’s acceptable or appropriate to use in everyday life,” Zeisler said. “For example, my magazine is called Bitch. That doesn’t mean that I want to be called a bitch in the sort of general way that people understand that word.”

She said that overall, the societal definition of words can change over time.

“I think that words adapt and society adapts to words. And as time goes on, certain words come to seem acceptable,” Zeisler said. “There was a time where you could absolutely not say bitch, you absolutely could not hear it on the radio; it absolutely could not be the title of a book. Maybe 20 years from now, that’s where we’ll be with cunt, you know what I mean?”

With efforts to reclaim this language, it is important to remember that it does not mean the same thing to one person that it does the next. The meanings of these words may be shifting, but have not yet changed in their entirety.

Kaley Belval is a sophomore documentary studies and production major who says that while sticks and stones might break her bones, words will never harm her. Email her at kbelval1[at]ithaca.edu.