Fights in a Fancy Frenzy 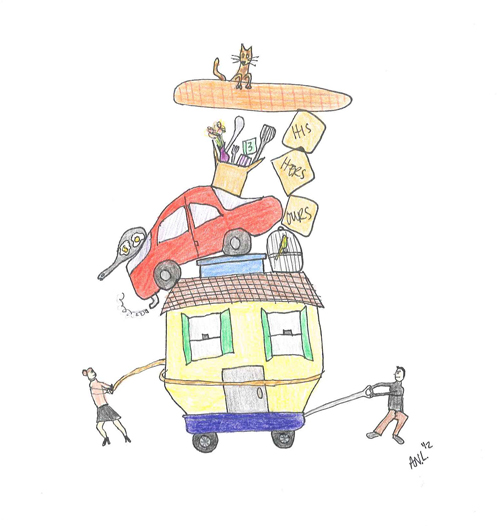 Divorces of wealthy couples end in tug-of-war over riches

From famous Hollywood stars to Manhattan couples, divorce fights between the rich and pretentious are becoming a more regular occurrence. The greed-fueled feuds happening behind closed doors are over lavish beach homes, family-owned business empires and Italian leather furniture. Between the historically high divorce rates and the difficult economy, perhaps for some money does not buy happiness.

In America, money and property are being tossed around because of divorce. For instance, the divorce of Madonna and Guy Ritchie in 2008 was “one of the largest payouts ever in a divorce settlement [at $76 to $92 million]” according to Liz Rosenburg, Madonna’s spokeswoman, in an article by People. Jamie McCourt relinquished her stake of the Dodgers for $131 million after her divorce with Frank McCourt, CEO and owner of the team, in 2009. The first African-American billionaire, Robert Johnson, divorced his wife Sheila in 2000 for a little more than $400 million. Five years later, she married the judge who ruled her divorce case.

Over the years, couples from all countries have had their own share of divorce battles to rival those of the Americans. Samathur Li Kin-kan and Florence Tsang Chiu-wing had one of the highest divorce settlements in the history of China at $154 million, not including the divorce assets. Irina Abramovich walked away from her divorce with Russian billionaire Roman Abramovich with $300 million, two mansions in Europe, a yacht and a private plane. In the 1970’s, Saudi billionaire Adnan Khashoggi divorced his wife, Soraya, for the mere amount of $874 million after a divorce war that lasted seven years.

This amount of money may just be a small sacrifice for the millionaires of the world, but for the general populations these settlements are astronomical. According to the U.S. census, in the past 12 months the marriage rate for men and women was 36.7 percent and the corresponding divorce rate was 18.9 percent, showing nearly half the people getting married are getting divorced too.

Although no amount of money or fame can settle the fight over your valuables, it is often “what the court feels fair” said Brette Sember, former divorce attorney and author of books such as The Complete Divorce Handbook, The Divorce Organizer and Planner, File for Divorce in New York, and many more.

“Sometimes the court will tell the couple they each get x-percent of the items and to divide them on their own,” Sember said. “[Yet] it is very expensive to litigate the entire list of household items.”

Even neighbors, friends and employers are going through divorces that would make the average middle-class American cringe at the absurdity of the arguments. Leslie Hoffman, a New Jersey businesswoman, just divorced her husband of 11 years and was able to walk away with much more than the prenuptial agreement that guaranteed her including a large sum of money and a horse stable estate in Western Pennsylvania.

“We fought over silly, stupid things now that I look back on it,” Hoffman said. “But at the time, everything seemed ridiculously important because it would be one more thing that I couldn’t ever have again.”

A child of a wealthy divorce battle, high school student Kelsey Stevens, said her parents’ split was overwhelming beyond the emotional distress.

“Sometimes I felt invisible during their divorce,” she said. “They were arguing over gifts, cars and everything. I felt like just another piece of furniture.”

It is hard for anyone who hasn’t experienced a divorce first-hand to understand petty divorce fights occur in every class of society in different scales, Sember said. Many divorcing couples fight over material things to hurt the other.

“Material things are often symbolic and people feel that by gaining control or ‘winning’ these items they somehow ‘win’ in the divorce,” Sember said. “Also, many people feel fear at the thought of having to start over in many ways — refurnishing a house or finding a new house — so they clutch at the existing item to avoid that fear of the unknown. Trying to ‘win’ something the other person wants is sometimes a way of trying to stick it to them and get revenge.”

Natalie Paonessa is a freshman CMD major who says “If you aint no punk holla ‘We want prenup!’” Email her at npaones1[at]ithaca.edu.